Seattle to Alaska's Inside Passage on the Carnival Spirit - Alaska Edtion

Among other things, ME loves to travel and when possible write about it.

THE CRUISE, as all of my cruises have been, to-date, was on Carnival Cruise Line; in this case the Spirit, of the class of ships known by the same name. My wife and I sailed the Spirit once before, in 2004, when we went to Hawaii out of Vancouver, B.C.; coincidentally, the ship's captain, Captain Volte, was the same captain of our first Caribbean cruise in 2003.

The trip started August 16, 2011, after we spent several days visiting Seattle and the surrounding area, on Pier 91, on the North side of Puget Sound.

I Hate to Say it, But the Trip Was a Bit of a Dissapointment

YES, A DISAPPOINTMENT. ALASKAN CRUISES ALWAYS HAVE A LOT OF HYPE surrounding them, but sadly this particular one did not live up to it. This is not to say that my wife and I did not enjoy the trip, we did, very much. But nevertheless our expectations were not met in three major regards; glaciers, mountains (for me), and wildlife (fish or fowl). None of this, of course, was the fault of the cruise line but instead it was location (I think), past experience, and timing.

I HAVE SEEN GLACIERS BEFORE ... ON TV AND IN THE SIERRA NEVADA'S, before it disappeared a few decades ago. It was the advertisements on TV and in magazines that led to my dismay regarding glaciers. Both media showed beautiful, white, massive walls of glaciers falling (well maybe sitting next to) into the sea as we watched of the coast on our ship's perch. Well, that scene may be on a more Northern route, but not on the normal Alaskan cruise.

This doesn't mean we didn't see glaciers and that they weren't big; we did and they are, but they were still somewhat underwhelming. The first one we saw was in the Tracy Arm Fjord and that is when we found out how dirty (not gleaming white as in the commercials and pictures) they were; you can get an idea from the picture. 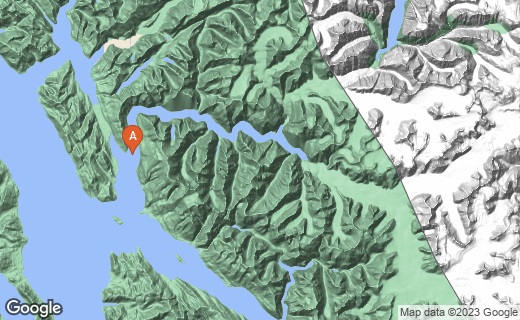 IF YOU LIVE ON THE WEST COAST OR HAVE BEEN IN THE ROCKIES a lot, then the old saw "if you've seen one mountain, you've them all" applies. There is no question the mountains in Alaska and the Yukon (Canada) are a sight to behold, especially if you are from a non-mountainous state; but, they were not much different (save for a glacier or two) from what I have lived around most of my life.

YES, THAT'S RIGHT, WHAT WILDLIFE? THAT WAS THE GREATEST disappointment of the whole trip. The cruise was 8-days and we saw our first wildlife at our first port-of-call in Skagway ... our at least we thought we did. To the right are a pair of mountain goats perched on, you guessed it, a mountain.

After staring at these goats for awhile, leaving to go into a store, and then coming out again to see if they were still there. They were. If fact, they hadn't moved a muscle in 20 minutes; we took a closer look through the telephoto. What we really saw in Carcross, Canada is below.

(Did you know the Carcross is owned by a taxidermist ... that's right - the goats were stuffed ... sighhh.

A few days later, we finally saw a real animal, the only one mind you; it was a bear cub crossing and bear crossing! Really, that was it ... well almost, there were those two dolphin we saw from the ship on the way back. :-(.

The Griping is Over

THE ABOVE ASIDE, WE DID HAVE A GREAT TIME SEEING THINGS we had not witnessed before, which I would like to share with you. From the itinerary you'll notice we left on the 16th at 4 PM and spent the next day and night sailing (very, very slowly) North along the Canadian and Alaskan coast. The next morning we were in position to enter Tracy Arm fjord (see map) to see our first glacier.

Below are a set of photos that follow the course the ship took going into and then coming out of Tracy Arm Fjord.

ONCE THE SHOCK AND AWE OF SEEING THE GLACIERS up close and personal, so to speak, we started steaming North toward our first port-of-call, Skagway, AK. 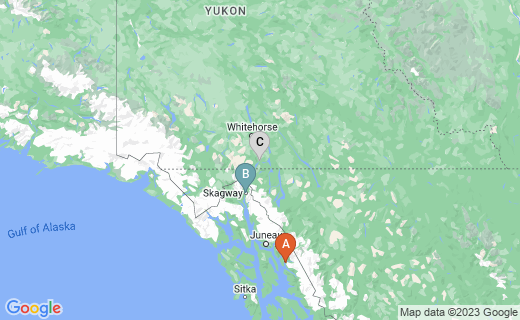 Before getting to Skagway we took a side trip to see a glacier.

1st stop on our Alaskan cruise.

Skagway was the jumping off point for one of the most interesting excursions we took on the cruise. It started out has a bus trip up to the Yukon in Canada and then take the White Pass & Yukon Route Railroad. I don't remember much of the town itself but I am sure it was quaint and pretty.

The terrain, as one would expect, was gorgeous. We traveled through the mountains until we arrived in a "plain" at a bridge that splits the Bennett and Nares Lakes and leads into Carcross (formerly Caribou), YK, a little berg that reflects the rustic, backwoods flavor of a former gold rush territory; oh yeah, it has its own little desert as well. From there, we took a short trip up to Caribou Crossing Trading Post where my wife and I saw our first real wildlife, a pair of mountain goats on the side of a hill overlooking post ... or so we thought. From there we took the bus back to Carcross and boarded the White Pass & Yukon Route Railroad for the trip back to Skagway. More later, but first some pictures.

On The Way To Carcross, Yukon Canada

In Search of Wildlife

In one of the pictures above you will see two mountain goats at the Caribou Crossing Trading Post in the Yukon. We thought finally, real Alaskan wildlife. I spotted them first and went to find my wife who had wandered into a wildlife museum. When we came back outside I pointed them out to her.

While we looked up at them I noticed something strange - they hadn't seem to move. So we stared for awhile; they stayed put. It finally dawned on us where we were. The Caribou Crossing Trading Post was owned by a taxidermist. The museum was full of his beautiful work - and so was the mountainside with the two mountain goats. 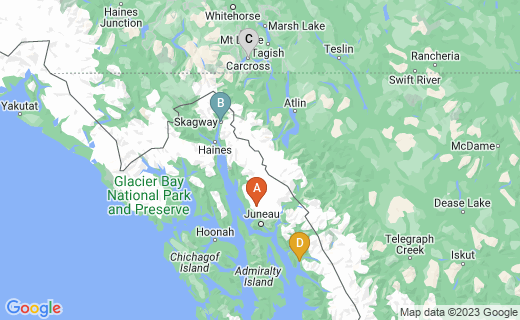 It was north of Juneau, at Mendenhall Glacier National Park where we say our first real wildlife. Along with a beautiful eagle (I think) we saw a bear cub. We were standing at stop waiting for a ride when, at a bear crossing very near by, we watched a bear cub scamper across the road and disappear into the forest on the other side. We waited for the mother to join, but, sadly, she never did. 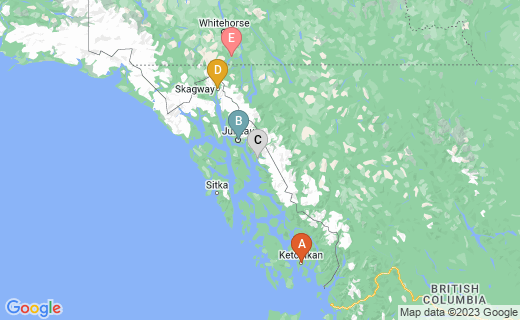 Victoria, B.C. WAS on the itinerary, but they arrived rather late. If my wife and I were nightclubers, it might have been an okay stop; but we aren't, so we stayed on board.