Beginning in the year 2000, assisted by a cadre of consultants including Urban Design Associates, Shaker Heights, Ohio formulated a Strategic Investment Plan for the city. Like most such efforts, that plan identified key zones within the city where appropriate development was crucial to insuring the longer-term viability, growth and vibrance of the surrounding community. Within this affluent inner-ring suburb, areas identified for selective improvement included existing (and generally declining) commercial districts along the primary arteries of Lee Road, Chagrin Boulevard and Van Aken Boulevard, especially nearest their mutual intersections.

Focus was first brought to swaths of retail and business properties land bracketing both Chagrin Boulevard and Lee Road near a busy light-rail transit station. The city held a development/design competition, soliciting proposals from a variety of local and regional land developers, architects, designers and related consultants. Shaker Towne Center, a newly reconfigured and revitalized retail shopping center along the north flank of Chagrin Boulevard, was the selected entry. 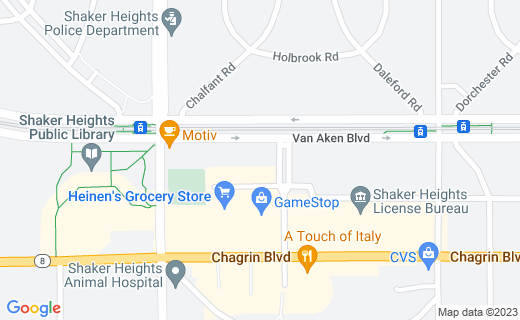 The commercial and community impact of Shaker Towne Center has since been broadened by additional public and private improvements in the surrounding area. Construction of the nearby Avalon Station loft condominiums brought additional residents to the immediate vicinity, while roadway and related infrastructure improvements have made travel, traffic and use easier. Proximity to the Shaker/Van Aken spur of the Regional Transit Authority's light rail 'rapid transit' system insures steady streams of by-passing commuters. The city's investment in a signature fire house and related peripheral growth has also further improved the neighborhood.