Sheep Rock is yet another part of the John Day National Monument along with the Painted Hills and the Clarno unit. Sheep rock was named for the big horn sheep that were seen once upon a time to inhabit its rocky sides as it towers over the John Day River.

Like the Painted Hills and the Clarno unit, Sheep Rock is another geological wonderland and is part of the John Day Fossil Beds that are rich with the carryover of volanic times estimated to go back 20-30 million years when lush forests inhabited the now arid desert plains of Central Oregon. The entire park is a wonderful mixture of topography where you can hike, camp, and picnic and is rich with history of this part of Oregon.

The Cant Ranch is now a National Park Service visitor's center and has been restored to represent the original homestead. In it, you can find all kinds of information and exhibits as well as guidance for this very popular vacation area and what to see. Taking just a drive through the John Day National Monument on a day trip, you won't believe your eyes! 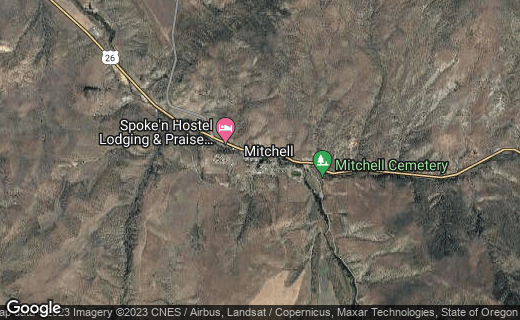 American Indians inhabited the land now known as Sheep Rock and as well spread into Eastern Oregon. The groups famous for residing in Oregon were the Columbia Plateau and Great Basin groups. Pictographs in Picture Gorge go back 2000 or more years and depict the peoples traveling through the area. In more recent times, there were the Tenino of the Plateau tribe and the Northern Paiute tribe of the Great Basin. They found the Sheep Rock area a wonderful spot to hunt, fish and gather roots.

In 1862 and into 1909, the Homestead Act allowed settlers to claim 160 to 640 acre tracts of free land. One of the first settlers to the area was Frank Butler who settled in an area north of Picture Gorge. Another family - the Officer family - had the first ranch in the area when Eli Casey Officer took a homestead claim in 1881. One of his sons homesteaded the land where the Cant House is now located and sometimes accompanied famous geologist and minister of the area Thomas Condon on study expeditions.

Scottish immigrants Elizabeth and James Cant purchased 700 acres of land in 1910 from the Officer family and established a ranch. In 1916, they procured plans in the mail to build a larger home and had their home built from wood from the mill in nearby Mitchell in 1917. Their homestead is now the visitor's center and as stated above, has been restored to most of its original detail. The Cants turned the homestead into a functional farm and orchards and farmed crops such wheat and alfalfa. The Cant land eventually encompassed 6000 acres.

Gold was discovered in eastern Oregon in 1862 and thus sheep farming was begun as it was discovered that the climate was very suitable for grazing sheep. However, sheep grazing and raising is a year-round process as sheep are herded into remote areas for summer and then fall is spent shearing and trailing some of the selected sheep to market to sell. Winters are consumed by grazing the animals in the hills and in spring, the sheep farmers are occupied 24 hours a day with lambing. In the area, many natural predators abound and diseases such as scabies and rocky mountain spotted fever were common - so raising sheep was a cumbersome task. The Cants owned more than 4000 sheep and employed several ranch hands - though friends and neighbors regularly swapped out when one ranch needed more hands than another during times of increased work.

About 1946, the Cants followed the generalized trend and switched from sheep to cattle as it was less time consuming and more lucrative. However, it did take its toll on the environment as cattle raising is known to destroy the vegetation especially if they are allowed free range.

The John Day Fossil Beds National Monument was created in 1975 and in 1977, the house became the visitor's center. In 1978, it was restored to its 1920s appearance. The house has a fossil museum, library, and administrative offices as well as outbuildings for paleontological research and exhibits along with educational programs.

It is an area rich with history and natural beauty. Some of the sites you might want to visit in the Sheep Rock Unit:

Most any time of year, the topography and the colorful geological wonderland of the John Day Fossil Beds will amaze and delight the casual visitor or the national monument connoisseur.

There is much to take in and fall in love with in Central Oregon - besides the climate which is remarkably dry and sunny most any time, any season, there is a natural beauty about this part of the country that truly takes your breath away.

Recreational and vacation opportunities abound here in this wild and natural place so whether you are passing through or staying for a while, look about and you will be astounded at all the natural wonders!