Germany and a Bavarian Castle

After a short trip through Austria recently, we arrived in the dark at the quaint town of Garmisch, Germany. The attached town of Partenkirchen boasts of fascinating art and murals. Both towns rest quietly at the foot of the Bavarian Alps in the Werdenfelser Valley. Historic buildings, architecture, monuments and so much more line the cobblestone streets.

We stayed at The Edelweiss Lodge, which is specifically for veterans of foreign wars. Since we arrived on Halloween night, several decorated pumpkins greeted us. It was a very warm and welcoming resort.

The lodge is named after the Edelweiss flower. The legend goes that a young Bavarian couple were hiking through mountains where Alpine peaks pierced the blue skies. They walked through blooming wildflowers of many colors. On an exposed cliff, the young man spotted a white flower with felt-like petals. Showing his bravery, yet ignoring his own safety, he plucked the flower. It was his ultimate love charm from the Alps to gift to his lovely lady. Since then, the Edelweiss flower has been the inspiration for music, stories and folklore throughout the Alps. The flower is also known for its healing abilities. 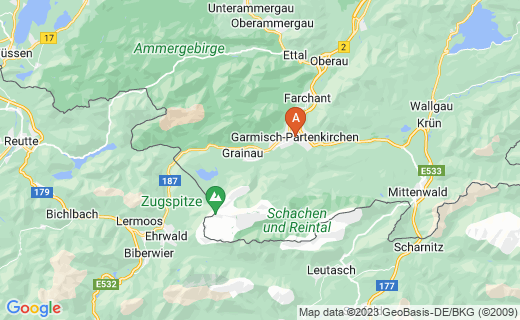 Have you been to Garmisch, Germany?

After a good night’s sleep, we were anxious to explore the area. We jumped in our van and drove to the amazing Eibsee Lake at the base of the Zugspitze peak admiring reflections on the glassy water.

During the winter, this area is packed with serious skiers. Sledding, snowboarding, paragliding and hiking are available during the various seasons. Horse and carriages are ready to take you around town at your bidding.

We chose to spend the rest of our day at the Royal Residence Hohenschwangau Castle, once home to King Ludwig II. While waiting for our tour, we enjoyed the colorful foilage surrounding the former residence.

The castle has 300 stairs most of which we personally ascended or descended. We heard the history of King Ludwig II on handsets the recordings of which were available in several languages. As we were escorted through the castle, history was shared about each room. We were unable to take pictures, but believe me, it was extraordinary.

Just a bit about King Ludwig. Born on August 25, 1845 to Crown Prince Maximilian of Bavaria and Princess Marie of Prussia, he spent his childhood at the Hoehenschwangau Castle with his mother and only brother Otto. He loved German legends, artistically displayed on the walls of his home. He developed a romantic outlook on life worshipping the forests near the castle and he was considered an introvert. He loved poetry and drama, escaping into a world where everything was beautiful and noble.

At age 16 Ludwig experienced Richard Wagner’s opera, “Lohengrin”, which was perhaps the beginning of his downfall. He collected all publications and compositions created by Wagner. When Max II died in 1864, Ludwig became King of Bavaria at the age of 18. He had very little contact with the world and very little knowledge about politics. He did not work well together with his cabinet.

Shortly after the beginning of his reign, Ludwig invited his favorite composer Richard Wagner for a meeting. He offered a chance for Wagner to immortalize his works for future generations. Their friendship grew and was mutually beneficial, at least for a while. Ludwig II created a Music School and new opera house. Those around the King considered Wagner a revolutionary. He was compared to a plague and rumors circulated that he exploited the King.

Under force, Ludwig II yielded to pressure and asked Wagner to leave Bavaria. The king had no love interests, but his only friendship was with his cousin Elisabeth, Empress of Austria. Engaged, but never married, he retreated again to his beloved Alps. He visited Richard Wagner in Switzerland and on his return Parliament demanded war against Prussia.

Ludwig threw himself into rebuilding extravagant castles. Meantime, Germany was busy taking over Europe. The embittered ing seldom went out in public and became known as the Fairy Tale King or Swan King. In a single generation, the huge fortune amassed by his family over 800 years was gone. A conspiracy developed, doctors were bribed and the King was declared insane. A commission from Munich stripped him of his crown and freedom. His death is mysterious as he was found in a lake near his castle.

After our visit to the castle, we enjoyed some local food. I returned with a new appreciation of the beauty to be found in Southern Germany and hope to return again.