The white man asked him if petroglyphs still had any significance to the modern-day Indian. Rupert took a deep drag on his unfiltered cigarette and looked hard at his white visitor who had asked if it was all right to come up from the university. The white man's college dean had come up with a two hundred dollar grant, and the Indian thought, what the hell, why not show this guy around.

"Petroglyphs," the Indian blurted out in a raucous voice. "Now there's a word for you!"

"What do you call them?"

Rupert took another puff on his cigarette avoiding getting smoke in his eyes. He was trying to psych out this nervous professor whose face betrayed apprehension. He thought he'd give this professional white man his money's worth.

"Care for a cup of coffee and some rez fry bread," the Indian asked.

"Had some before. What you university folks call petroglyphs...we call...spirit drawings."

"Best not to sit here and gab about it. Swallow your coffee, and let's go have a look. Better yet, take your cup with you."

"Thanks. Where are we headed," the professor asked while munching on a tasty piece of fry bread.

They both hopped into a beat-up blue pickup truck and pulled away from the old Indian's tar-paper home. Rupert checked to see that his eagle feather was secure under his shirt. They bounced along a dirt road toward some arid sagebrush hills below the Rockies of Wyoming. Green groves of cottonwoods cliddered at the edge of a winding stream, creating dark patches of shade. Otherwise the sun glared brightly on the high open prairies where rock and grass met sky. The high Wind River Mountains seemed to float above the land like distant clouds.

"You been in this country long," the Indian asked.

"Just three years. But it's really my second home now. There are a few things I don't like about it, though."

"You been here all your life, Mr. Thorpe?"

"That and then some."

The truck jolted over a big boulder in the road, spilling the remains of the professor's coffee into his lap. They began to climb up a steep canyon past clumps of chokecherry bushes growing right along the white-water river. A golden eagle circled above in the cloudless sky of a Wyoming summer day. After several steep switchbacks, they broke out into a level plain, but it was too rocky for vehicular travel.

"Now we get out and hoof it," the Indian said with a twinkle in his eye. "We have about a three-mile walk over rugged terrain. Watch out for rattlers."

The white man, with a bit of a blond goatee and a balding head, tried to overcome his apprehension with a rapid succession of classroom-style questions about Indian uses of this and that. When he stepped on a piece of dead sagebrush that snapped back at him, he thought her was a goner. Rupert tried to swallow his chuckle.

In the late afternoon, they reached a high sandstone cliff full of petroglyphs. The Indian became quite still and thoughtful while the dean-sponsored professor bungled along several yards back. One of the spirit drawings was in the shape of a serpent, and by coincidence a snakeskin lay just beneath the cliff. The white man, from Bloomington, Indiana, didn't like the looks of the place. They continued their trek just a bit farther to a cool sandy spot where they could sit down in relative comfort or discomfort, depending on the viewpoint. Rupert began to explain things.

"You see those drawings up there?"

"Yes, I see them," the nervous one responded. He really didn't see them since he had rattlesnakes on the brain. The whole cliff was laced with these drawings ranging from sheep-like creatures with giant horns to humanoids with rainbow coronas around their heads.

"Well, these drawings are powerful medicine. They change each time you come back here to see them. Some will have five fingers one time and only four the next." He could see that the white man really wasn't listening, so he volunteered even more information.

"If you're seeking medicine, you come to a place like this, especially around sundown when animal voices are calling all around, but they really aren't animal voices."

"You should fast for three days before you come here and sit at the base of the cliff. The sun will set as you listen to those voices you think are far away, but they're really here just like mine and..."

"Do you see many rattlers around here this time of year?"

"Then when the sun goes down, you'll blank out. You'll see bright-colored veins under the earth leading up to plants. Each vein is like a channel of strength for human illnesses and fears, and the plant it goes to can cure this illness..."

The white man was feeling a bit faint. He unbuttoned his jacket and breathed deeply. The Indian continued.

"But how do you know Duma Upa, He who is above, has spoken to you? You'll know by the feather that is left in your lap the next day. The sun will have no sooner set than it will have risen. It will seem like minutes. But if you come to a place like this just for the heck of it, you'll wake up tumbled down the river."

"Hadn't we better get out of here before dark, Mr. Thorpe? We'll not be able to see what we're stepping on."

"Mr. Thorpe, let's have another cup of coffee back at your place where we can discuss the significance of petroglyphs to modern-day Indians." Somehow, they stumbled back to the truck in what seemed like half the time. Stars shone brightly over the sandstone ledges.

They followed that tumbling river back to the truck and back to the Indian's place, not too far from the main road. They really didn't talk too much. After a few perfunctory questions, the white man drove all the way back to the security of his books and his office, wondering why he hadn't done all this by telephone.

The reader should be aware of the difference between a pictograph (painted image) and a petroglyph (carved image) on sandstone walls. I believe that this story is partly autobiographical except that I greatly enjoyed being on the reservation with Rupert Weeks. 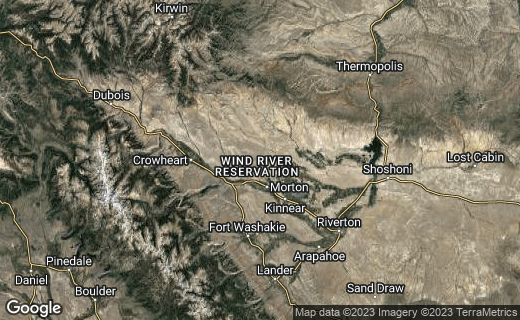