In the spring of 2005 I had the privilege of being appointed as visiting professor to the University of Bologna (founded in the eleventh-century). My class? Contemporary Native American Fiction. My students? Italian, German and Spanish. I will write of these experiences in an upcoming hub. One of my great joys on my days off was to walk with my wife through the busy streets of Bologna to see such treasures as early sculptures of Michelangelo in Saint Dominic's Church not too far from campus or to stop at a street-side cafe and order some tasty lasagne bolognese along with a glass of Moretti beer.I love the Italian word for thoughtful, meditative walking--passeggiata

Of all the passeggiata we took, I remember most our first taking a bus from Piazza Roosevelt to the Bivio San Luca (Saint Luke's crossroads). Here we took steps up to a bridge crossing the road to begin a climb, a long climb up to the Chiesa di San Luca (Saint Luke's Shrine) overlooking the entire city. At first there are steps leading you past the first of many series of frescos painted on the walls of religious scenes from the life of Christ. After climbing a series of steps, the walkway leveled out and led us higher but at a gentler angle. Sometimes we passed Italian pilgrims saying the rosary in front of each fresco.

Then we climbed up a series of steep steps and as we did so, bits of Bologna began to spread below us, and we could see into the dense foothill forests on either side of us. After much huffing and puffing, we gained a distant view of the shrine looming high above. We both paused to enjoy yet another fresco as we sipped from bottles of acqua minerale. Bologna really started to spread out far below. After a forty-minute steady climb, we at last reached the Chiesa di San Luca (see accompanying image). We entered this domed structure to experience a world of peace inside of a church with a striking figure of the Black Madonna high above the altar.

Each May the image of the Black Madonna is carried out of the chiesa down to the streets of Bologna in a religious procession to a specific church such as Saint Peter's of Bologna. There the image rests for a week until it is taken in ceremony to yet another church. This process continues each week of the month of May until she is returned to her hilltop residence at San Luca the last day of May.

After spending some quiet and prayful time, we left San Luca to walk westward a bit, all the while enjoying a magnificent view of the Italian Apennine Range that remains snowy well into May. The view reminded us much of our home state of Colorado and its high foothills before the Rockies. As we ambled along, we came across a licorice stand that sold all kinds of licorice either twisted or in foot long tubes stuffed with white candy or little chunks with an even softer, sweeter licorice within. They were black or brown or yellow or red in color. We bought a bag- full and stopped at another stand for shots of espresso. We nibbled on licorice all the way down to the Bivio San Luca to catch a bus back home.

In the evenings way before sunset, we left our apartment to take another stroll to a public park behind the centro lame shopping center to enjoy rows of mulberry trees laden with purple mulberries. From this park we could clearly see the lofty Chiesa di San Luca rising high above the city always offering a reprieve for the residents below.

It would be a wonderful experience to see the image of the black Madonna carried all the way back up to the shrine of San Luca to be placed once again high above the altar. The city of Bologna, Italy is small compared to Rome or Milan; its population is only 380,000 people.

Have you ever been to northern Italy? 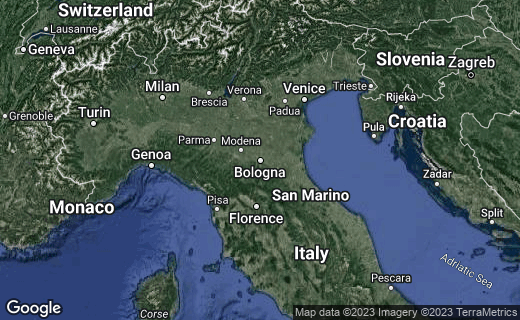 Did you know that Bologna is the capital of balonies?