St Ninian’s Isle has history, geography and wildlife lessons for you

St Ninian’s Isle is a beautiful spot to visit on a trip to the Shetland Islands. It is also suffused with historical and geographic importance, and it is a treasure trove of birdlife and fun.

To have a great day at St Ninian’s Isle and the tombolo, I suggest you start with a walk around the island.

To get there, drive carefully along the winding single-track road that leads to the car park. If you are hungry you can stop for a moment at one of the picnic tables for a bite to eat, otherwise, head down to the tombolo and walk across the beautiful white sand to the island.

Map of the lsland 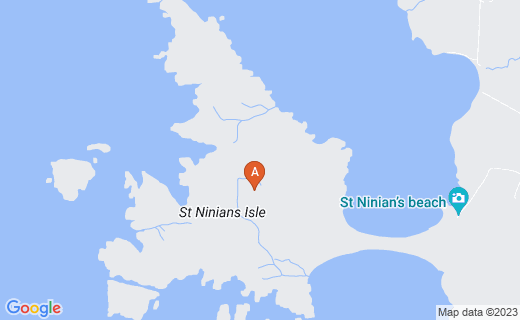 A walk around St Ninian’s Isle

The island has 40 metre high cliffs on the far side, so there is a little climbing, and that begins as soon as you leave the beach. However, as long as you are fit, it’s nothing too strenuous. I suggest you turn left as you get onto the island and walk along the south side first. Just beyond the coast are smaller islands and rocks, known as holms and skerries, and the view is beautiful.

Do be careful to stay well back from the cliff’s edge as the coastline is uneven with many indentations, known in Shetland as geos. No one has lived on island since the 18th century, but there are many rabbits and therefore many rabbit holes so that’s another reason to take care! This walk is not suitable for very young children unless you can be sure of having a firm hold on them, but our children walked St Ninian’s Isle for the first time when they were 7 and 9, thoroughly enjoyed it and got back safely.

As you walk, all around the island birds will be flying, swooping, diving. They will be in the sea, the air and nestled in the cliffs. Some birds you can expect to see are gulls, cormorant, lapwings and the incredibly cute puffins. The third and fourth photographs below were taken on the north side of the island, where the cliffs are spectacular.

As you leave the cliffs behind and walk back towards the beach you will come across a ruined chapel that is the only evidence that humans ever inhabited this island. Although this chapel dates from the 12th century its history goes back much further. The site was a pre-Christian burial site and Neolithic remains have been found there, as well as the treasure that made St Ninian’s Isle famous.

In 1958 during an excavation of the site, a schoolboy found a box underneath a stone slab in the chapel. Experts believe the treasure belonged to a family rather than the church, and was probably buried there for safekeeping as churches were thought to be safe places. The treasure is from Pictish times and consists of brooches, cloak fasteners, sword pieces and bowls used for feasting. The quality of the pieces suggests that the owners were a family of high standing. In the box along with the treasure was the jawbone of a porpoise. It must have been precious to someone too.

Replicas of the St Ninian’s Isle Treasure are on show at the Shetland Museum in Lerwick, and the original pieces are displayed at the National Museum of Scotland in Edinburgh.

A perfect and deserted tombolo

What is a Tombolo?

Now that we have completed our tour of the island, with a supersonic detour via Lerwick and Edinburgh, it’s time for a geography lesson.

A tombolo is a strip of sand that connects an island to another land mass. It is formed by “wave refraction.” Wave refraction occurs when waves come close to an island and slow down because of the shallow water. The waves bend around the island, taking sediment with them. This gets left at the inner side of the island, and gradually the sediment builds up to form a spit – a beach that extends into the sea instead of running along the coastline. Eventually the spit joins the island to the mainland – and that is a tombolo!

St Ninian’s Isle beach is considered to be a classic tombolo and is at least 1000 years old.

Now that lessons are over, you are free to play on the beach.

St Ninian’s Isle’s tombolo beach also has fun, and the is warmer than you’d think!

The beach is perfect for flying kites, building sand castles and throwing Frisbees. The sea current, the Gulf Stream, flows from Florida northwards taking warm water with it. Part of this current, the North Atlantic Drift, flows past the west of Shetland so the water is warmer than it would otherwise be. This means it’s possible to go swimming, though you do need to be a little bit brave. Scuba diving is popular in the area because the water is so clear.

Other activities in the vicinity

Nearby places to visit are:

The Shetland Croft House Museum is a typical house found on a Shetland croft (small holding) during the 19th century.

Mousa Broch is a round building from Iron Age times, and is the most intact broch in existence. It is on the small island of Mousa, and boat trips run daily.

At Sumburgh is Jarlshof, another site of historical and archaeological importance, with the remains that can be seen there spanning a time period from prehistoric times to the 17th century. It has excellent Viking ruins.

Also at Sumburgh, is an RSPB bird reserve, with easy access and viewing of a stunning array of seabirds, including puffins.

Where to stay near St Ninian’s Isle

The Spiggie Hotel and self-catering lodges are located in a beautiful bay a short distance from St Ninian’s Isle.

Alternatively Lerwick, Shetland’s main town, is only 18 miles to the north and has many guesthouses and hotels. 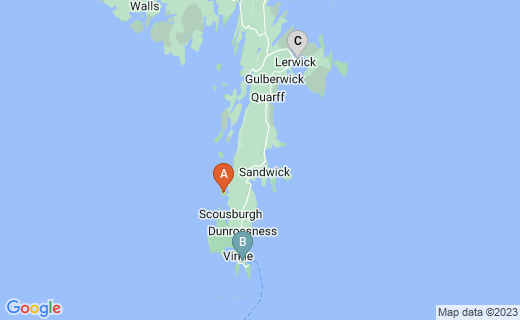 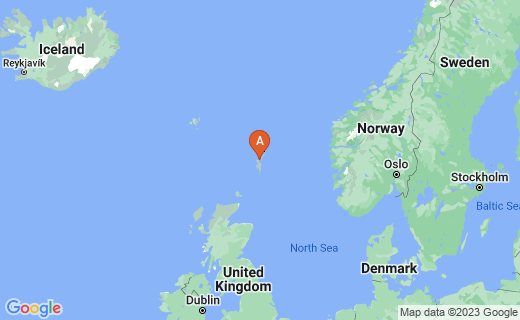 Travel to the Shetland Isles

There are 2 ways to get to Shetland: by air or by sea.

Getting to Shetland by Ferry

Although there are 3 ways to get to Shetland by sea: you could come on your own yacht (and some people do) or take a cruise that includes Shetland in its itinerary (and many people do) the most common way to arrive by sea is on the ferry from Aberdeen to Lerwick. Lerwick is Shetland’s main town, and is 18 miles north of St Ninian’s Isle.

The ferry is cheaper than flying, and for Europeans it gives to option to travel in your own car. The journey from Aberdeen is overnight, and leaves in the early evening. Three times a week the ferry calls in at Kirkwall in Orkney on the way to Shetland and does the same four times per week on the way from Shetland. The stop is brief and requires no change for passengers travelling all the way, and means travel between the two island groups is straightforward. The ferry is well equipped with cabins, restaurant facilities, a cinema and a shop for souvenirs or essentials you may have forgotten such as toothpaste. It is also reasonably priced.

The ferries are operated by NorthLink Ferries

Getting to Shetland by air

Sumburgh airport, on the southern tip of Shetland’s mainland, is 10 miles from St Ninian’s Isle. There are daily direct flights to Sumburgh from the following airports: Glasgow, Edinburgh, Aberdeen, Inverness and Kirkwall. Aberdeen has most daily flights and Glasgow, Edinburgh and Aberdeen all have good connecting flights with both domestic and international airports.

From Bergen in Norway there are twice weekly flights.

All flights to Shetland are operated by Loganair, although flights from the UK mainland airports are franchise flights through Flybe, and booked through them.

Have you visited St Ninian's Isle?

If you have visited St Ninian's Isle, did you enjoy it? Cast your vote by giving it a star rating below.

What did you think of St Ninian's Isle?