Barcelona In A Day

I am currently studying Sociology in my third year at Cardiff University. I love to explore cultures and societies around the world.

Myself and my three best friends stayed in a town called Lloret de Mar where we rented a small apartment. Lloret de Mar had the beautiful beaches, chic cocktail bars and popular nightclubs however we are explorers and nothing interested us more than a day trip in the renowned city that is Barcelona. However, the reality of the situation was that we didn’t have any actual plan of how we were getting to Barcelona other than to ‘wing it’. So, this is what we did.

On the morning of the 8th July 2017, we all woke up and packed our bags with water, sandwiches and complete with a €1 share bag of crisps from the local supermarket. We walked the 25 minutes to the bus station, with the idea that we could find out the information we required there. This is what we did and to our pleasant surprise, we found that we could get to Barcelona and back for only €16 each (this equates to around £14.28). This €16 included a bus journey to Blanes train station, a train ticket into central Barcelona, and the same on return. This option is the most affordable and what I would recommend if you were not too bothered by the journey being potentially crowded and stuffy. The entire journey took just over an hour and a half with around 45 minutes sitting on a train floor after giving up our seats on what turned out to be a very hot and busy vehicle. Due to this, we were eagerly awaiting our reunion with a floor that didn’t move and also for the feeling of numbness to disappear from our backsides. We were also eager to breathe in some fresh air and that we did once out of the muggy underground, that alongside Barcelona greeting us with rain. However, a little rain didn’t stop us from being completely in awe of the beautiful infrastructure surrounding us. We danced through Catalonia Square with hundreds of pigeons and busy people sheltered by umbrellas. As a typical teenage girl, admittedly I let out a little squeal when seeing the large Urban Outfitters sign on a tall, old-fashioned building and of course we proceeded to get a photo strip from the photo booth inside that was calling our names. Another highlight of our first hour in Barcelona was the slide that entered Sephora. Yes, a slide! This fascinated and excited our childlike minds and turns out to be a major selling point in getting people into your shop – here’s to hoping English shops take note!

The one aspect of our journey that we did plan was a trip to Park Güell as one of my friends had researched it at home with reviews revealing that it was not a location to miss. After visiting it myself, I 100% agree with this statement. Again, we were not very organised and even after consulting Google maps; we found that we were lacking knowledge on how to get to the park. It was time to ditch the interactive map and ask a real person and what better shop to find a helpful individual in than a chocolate shop. The shopkeeper was incredibly cooperative despite not speaking that much English and pointed us in the direction of the metro station while also informing us on which line to get. Once again, we were pleasantly surprised with the pricing of the metro tickets as we purchased a multi-person ticket for 10 journeys for €9.95 (around £8.90). If you have ever visited the London underground, Barcelona’s metro station is its reflection, with the same hot, clammy air and congested tunnels. Thankfully it was very quick and we were breathing the fresh air again in around 10 minutes when in Lesseps. If you don't mind the underground, I would definitely recommend the metro system over taxis. Even if you lack knowledge on how to use the metro, we found that the staff that worked there were very helpful and there is an online map. Therefore, even as 4 students with very little experience with any underground systems, we managed just fine and I would recommend it.

Once in Lesseps, Park Güell was effectively signposted all through the district, which presented the idea that it was a highlight of the region. By this point in the day, we were beginning to get hungry so decided to stop off at a café for some lunch. With the aim of not spending too much money, we picked the café, which showcased the biggest meal for the cheapest price, and I would say we probably succeeded. I had a pizza, which was loaded with cheese and looked as if a whole packet of ham was used as the topping, while all the others had risotto, which came in a literal frying pan just without the handle. With a couple of Cokes and waters, the bill came to €42 (around £31.98) which was a reasonable price that resulted in four people having very big food babies. After passing a couple of cathedrals and many of the same tourist shops selling Barcelona fridge magnets and T-shirts (both of which I confess to buying), we reached the sign on the gate of Park Güell.

Park Güell is one of the most naturally beautiful places I have ever encountered. The sun had finally made an appearance, which made the scenes even more incredible as we overlooked a huge balcony, in which you had the honour of seeing the horizon of Barcelona. You did have to pay €8 in order to go onto the balcony, which we didn’t do but got to see the view perfectly well from behind this (so if you're looking to save money, as we were, then it is not a necessity). It wasn’t just beautiful on the eyes; it was also beautiful on the ears as the park's wildlife complimented the swaying of the trees in the wind. As well as this, street performers entertained the masses of crowds by playing peaceful melodies in the shaded coves. The whole atmosphere was something you dream of, vibrant yet tranquil, busy yet entirely spacious. We spent around an hour and a half in awe of the surroundings but if we didn't have to try to get through as much as we could in the day we had, we could have spent a lot longer. Park Güell, in conclusion, was an experience to cherish and the wonder surrounding it will last in my mind forever.

For these reasons, I could not recommend it more - it is now down to you to make sure you do not miss the opportunity to see beauty at its absolute finest. And if you have money to spend then I would definitely check out the passes you could get which gives you entrance to parts of the park you cannot reach without it. Therefore, with this nice little extra, I believe you could potentially make a day out of Park Güell - just take a picnic for lunch, sit on the grasslands and bask in the sunshine when not exploring.

We then got the metro back to Cataluña where we walked from the square to El Gòtic district and then through Ciutat Vella district. These were again incredible regions with a modern yet historic vibe. With the perfect balance of higher-end shops, less expensive shops and market stalls, there was something for everyone no matter your budget. As well as shops, there were plenty of ice cream parlours, all of which sold the same collection of mouth-watering flavours. We chose one which was situated opposite a meeting point and what turned out to be the perfect place to sit, eat and people watch, while also bathing in the glorious sunshine. Barcelona is an amazing place to simply sit and watch the world go by, so put aside an hour in your journey to grab a cool drink outside, relax in the sunshine and just take in your surroundings. It was a chilled couple of hours where we walked in and out of independent stores and examined the unique masterpieces created by owners of market stalls. In the time where we wandered past numerous cartoon artists, we heard the booming of music beats only to follow and find the Pride parade. We were suddenly neighbours to rainbow flags and large open-top vans in which individuals were throwing sweets down to the onlookers – all while blasting Rihanna from the van’s stereo. Unfortunately, although our desire to stay and witness even more delights of this wondrous city, our time was running out.

We had left ourselves an hour to get back to the train station in order for us to make the last bus back to Lloret de Mar. Thank goodness, we did leave so long as it turns out that the train station was a lot harder to find than we thought. Despite asking the tourist information point and locals (including a police officer) we didn’t locate the train station until the last minute. In relation to this, another recommendation of mine would definitely be to download a clear map, which contains your metro stations and attractions in which you can locate yourself at any point. However whilst on our adventure, we did see the extraordinary promenade located in Passeig de Lluis Companys on our adventure, which is home to the Arc de Triomf – another magnificent highlight of Barcelona in my eyes. The sculpture, when glowing in the sun, is incredibly picturesque and again it entertained a fun atmosphere with magicians and even a man with a huge bubble blower.

Once arriving at Barcelona Sants station, our train left roughly 2 minutes after we got onto the platform. The first 20 minutes of the train ride back to Blanes consisted of me sitting on the top of the metal bin grasping onto the handrail whenever the train started or stopped. However, gradually seats freed up and we sat, ate our sandwiches and crisps and compared photos from our fun-filled day. We got back to our apartment at around 10 pm and then proceeded to bed to soothe our aching muscles before the next day. Before falling into a deep sleep in our 30-degree room, I reflected on the day I had just experienced and came to the conclusion that there are many more days to be had in the sensational city of Barcelona. Time to get planning… 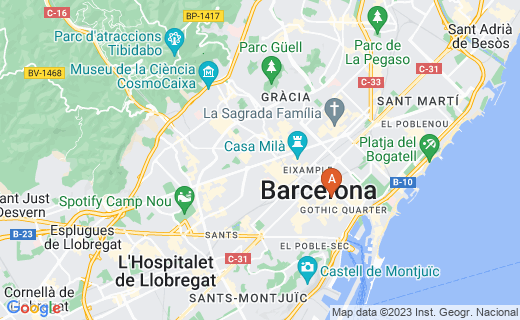