The views to and from the top, east to west across old Cleveland, north to Eston Hills, south to the Cleveland escarpment - worth the energy spent getting there

A walk for the energetic, good walking boots and strong leg muscles called for...

Roseberry Topping (1051 ft/320.34m) started out as a conical hill upthrust from the surrounding land thousands of years ago. It still was conical until late Victorian times when quarrying and mining gave it its unique 'Phrygian cap' shape. You can see this best looking south-west from Barnaby Moor, and north from Ingleby (to the south from Roseberry Topping, at the foot of the Cleveland Hills). The hill stands alone, isolated from the western edge of a moor that reaches in a 'swirl' from Guisborough and Easby moors.

You are rewarded - after a steep climb from Newton-under-Roseberry's car park - with views across to the south-west of the westernmost Cleveland Hills, to the north of Barnaby Moor in the middle distance, and to the east of Guisborough Moor. Further north, over Barnaby Moor, you will catch a glimpse of the North Sea. On descending to the east you should find the going a lot easier than the climb from the north-east. It is a 'moderate' walk, one that older children and teenagers would appreciate and enjoy thoroughly. On this walk you will come across the Hanging Stone. Nothing to do with executions. It is a feature reckoned to be of modern man's endeavours to gain from the earth's store of minerals.

From the car park by the A173 turn right onto Roseberry Lane, a slight incline that gradually steepens and will ease you into the climb ahead. Follow the lane to Newton Wood, up the stepped path and bear left to the edge of the trees before turning sharp right along the steeply inclined inset stone path. This brings you to the summit of Roseberry Topping - Odinsberg in the early Middle Ages when the Danes first ruled this part of Northumbria in the 9th Century. They were later Christianised but it wasn't until the later Middle Ages that anybody 'picked up' on the name.

Take in the air (go on, breathe it in, it won't cost!), stretch and turn a few times to savour the views, northward to Barnaby Moor and the sea beyond, eastward to Guisborough Moor, south and south-westward to the Cleveland Hills and westward towards Ayton and Stokesley with the Dales in the far distance.

The way down is easier along the east-facing side to the col, rising a little again to Little Roseberry and on to Newton Moor. On passing through a wooden gate bear left on the moor to access Hutton Lowcross Woods over a stile to the left of the gate. Keep straight on along Royston Bank, watching out for fallen trees - some tree felling takes place regularly in these woods - and use the trails in the woods either side of the Forestry track, which can turn into a quagmire after sustained rainfall and forestry vehicles with big wheels and tractor-type tyres regularly come this way! Where the forest track takes a hairpin bend to the right go ahead along a narrow path to the Hanging Stone.

Take in the cracking views of Guisborough, Highcliff Nab and Eston Moor to the north-west (westward of Barnaby Moor, where the 'Nab' pinpoints the site of a Roman signal station and overlooks the Tees Bay - see the Hub-page 'WALK THE MOOR'). Keep a downhill course to another Forestry track and turn right for around 80 yards (25m). Turn left and head onward for a short time to reach a rough grass track, then turn left and at the main junction turn left again.

This track starts to climb. Keep on a grass track to a wooden gate, finally reaching a larger gate that opens onto Roseberry Common. Take the right-hand track. At the next two forks take the right to descend around the foot of Roseberry Topping and back onto Roseberry Lane, back to the car park.

On the east side of the A173 is a public house in Newton-under-Roseberry, the King's Head Hotel with a view from the rear of Roseberry Topping. To reach the village leave the A19 onto the A172. Passing Stokesley take the A173 off the large roundabout that leads to Great Ayton and Guisborough. Newton straddles the road on the north-east side of Ayton, and the large car park is on the right past the King's Head. There are toilets in this car park and it would be useful to take advantage of the facilities before you set off. Roseberry Lane leads off one end of this car park.

Nearby, westward, the A171 terminates at a roundabout at Nunthorpe where it joins the A172 to the south of Middlesbrough. The A173 joins the A171 at a roundabout near the western edge of Guisborough. The A171 skirts Guisborough on its way eastward to Whitby over the eastern Moors and nearby the A173 Guisborough-Ayton road touches both the old lifted S&D trackbed where it joined the also lifted Chaloner branch that skirted the north-west side of Guisborough. Both can be seen close to Pinchinthorpe's old station buildings (the S&D one on the east side and the NER one on the western side of the road bridge that oddly hasn't been replaced since the line was closed in 1966)!

Guisborough holds a twice-weekly market, and right off the A173 road away from the market place to Skelton is Gisborough Priory (note the different spelling), built by the de Brus family who are related to the present Lord of Annandale, descended from Robert I of Scotland. He holds land around Guisborough and Skelton, having come into it recently when a maiden aunt passed on (you know what they say, 'what goes around, comes around'). Also nearby is the Newham Grange Leisure Park (01642 300202) and the Captain Cook Birthplace Museum at Marton (01642 311211).

Plan your route by public transport, phone 0870 608 2608. Furthermore there is a small nature park close to the old S&D station building (now a private residence, as is the NER station building - accessed under the bridge - and the trackbed is walkable for a considerable distance. It's a pleasant walk, suitable also for pushchairs and wheelchairs, By the roadside is a small car park. There is no charge for parking, and each time I've been there has always been space to park. 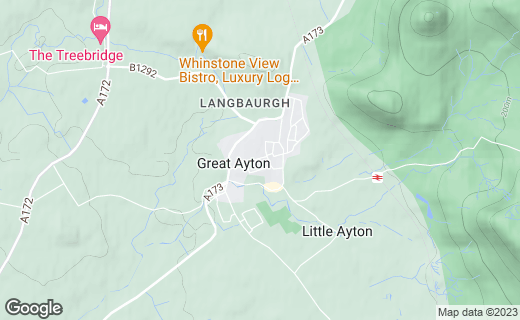 The Cleveland Way skirts the edge of the Cleveland Hills from west to east and along the coast south from near Staithes. Eskdale lies across the centre and the coastal cliffs in the east south-east by way of Saltburn, Whitby, Robin Hood's Bay, Scarborough and down to Filey. James Cook used the track to reach Staithes from near Great Ayton on the first leg of a career that saw him achieve any boy's dream