Travel North - 41: Look Around York, Tread Softly in the Footsteps of Constantine and Eirik 'Blood-Axe'

Right... which way shall we go, where to start?

Let's start with the Romans in 1st Century 'Britannia Major'

As a colonia, a legionary fortress and regional hub, Eboracum was established early in the 7th decade, AD, around thirty years after the Romans began their colonisation of Britannia in earnest.

The fortress was garrisoned by the legio IX Hispana. On their withdrawal came the legio VI VIctrix, who remained here probably until the Romans left early in the 5th Century. Originally of timber.construction, the fortress was built in the 'vee' of the Ouse and the Foss, and rebuilt in stone around the end of that century. The cathedral (or Minster) foundations were excavated for reinforcement, only to reveal remains of their headquarters building. A trading settlement sprang up west across the Ouse, to grow in status as a colonia and regional centre of Britannia Inferior early in the 3rd Century.

Eboracum retained its status as the northern capital in the 4th Century when a bishop attended the Council of Arles in 314 AD. What little is known of the city is that there were large public buildings including baths, private quarters decorated with mosaics that told of the prosperity of this regional centre. Inscriptions and burials offer information on a broad range of beliefs aside from Christianity. Inscriptions also point to trade links with Rouen, Bourges and Bordeaux in Gaul.

Both the fortress and the colonia appear to have been deserted by Romans by the early 5th Century . Now a special mention of

Constantine (AD 274-337, reigned 306-337), the first Christian Roman emperor dubbed 'the Great' in recognition of his achievements. He was born at Naissus (now Nis), son of Constantius by Helena.

In 305 Constantius succeeded as Augustus, or senior emperor of the Western Empire. Constantius would not reign long, however. Constantine left the court of the Eastern emperor Galerius to be by his father's deathbed in Eboracum a year later, The army proclaimed him Augustus illegally on his father's death. After ruling from Eboracum for Six years he defeated Maxentius close to Rome.

Homing in on York 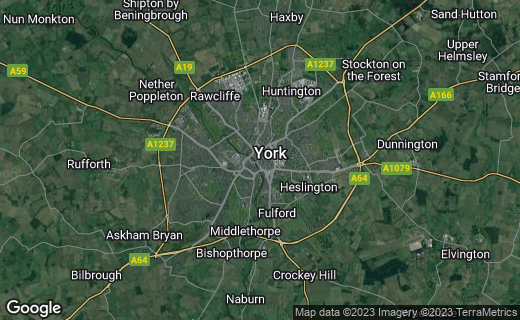 Eboracum's role as regional centre of the empire went into steep decline when the Romans left to shore up the heart of their empire.

We next see the city emerge as Eoferwic in AD 627 when Oswald, the first Christian king of Northanhymbra was baptised here, and a bishopric was founded. The city became the spiritual heart of an archbishopric a hundred and eight years later. By the 9th Century Eoferwic was a thriving river port amid a web of tributary rivers that fed into the Hymbra (the Humber). Periodically Eoferwic found itself the capital of a united Northumbria and an isolated Deira, between Bernicia to the north and Mercia to the south. Until the Danes came in the 9th Century, that is. Then it was all change again...

A visit to York is not complete without a visit to the Jorvik Viking Centre on Coppergate. See how Eoferwic metamorphosed into Jorvik, travel back through time and listen to the talk in Old Norse amongst the inhabitants, smell the smells, listen to the shouts of tradesmen and playing children. Coppergate was flooded by the Normans in 1068 after their first timber castle was burnt down in an uprising. The second timber castle - even moated - was burnt down in 1069 when the North rose again against the Normans, this time with the help of the Danes under King Svein Estrithsson's younger brother Jarl Osbeorn.

Eoferwic becomes Jorvik and the crossroads of a new trading empire

In AD 866 the Danes seized Eoferwic. Ivar 'the Boneless', Sigurd 'Snake Eye', Bjorn 'Ironside', Halvdan and Ubbi, the sons of Ragnar 'Lothbrok' ('Leather Breeks') landed in Northanhymbra to avenge the death of their father at the hands of King Aella in Baebbanburh (Bamburh, Aella's fortified town near the North Sea coast).

In March, 867 in a belated show of unity, Aella the king of Beornica (Bernicia) fought side by side with the repudiated king Osberht to take Eoferwic from the Danes but lost, even though they broke into the burh. Both kings were slain, Aella (it is said) in a ritual execution known as the 'Blod Erne' or 'Blood Eagle'.

Until the following century Eoferwic, now Jorvik was in the hands of various puppet kings before Dublin Danish king Sigtrygg - or Sihtric - 'Caech' ('Squinty') took the city after being ousted by the Gaels. Aethelstan took the city in 927 after Sigtrygg wedded his sister and took baptism. Sigtrygg was slain by his own men for giving in too easily. Nevertheless under the Danes Jorvik's trade boomed. A little later in the century the Norse king Eirik Haraldsson 'Blood-axe' was invited to rule in 948. His first period of reign was brief, interrupted by Sigtrygg's son Olaf, who believed he should succeed his father, and Aethelstan's nephew King Eadred who sought to rein in the Danes' power. Eirik resumed his reign in 952, to reign until 954 when he was outmanoeuvred and killed on Stainmore by Osulf of Bamburgh. Osulf was rewarded by Eadred with the rank of Ealdorman of Northanhymbra (predecessor to the rank of earl introduced by Knut in 1016, derived from 'jarl').

Jorvik became Eoferwic again, although only to its Anglian inhabitants. The majority were still of Danish-Norse ancestry.

Prosperity lasted until the late 1060's, when William I felt he had to build two timber castles either side of the river in 1068 after a revolt across the North. They were burnt down later that year and rebuilt In timber. The Normans destroyed much of the city near the river when they sought to clear the area around their castle in the 'V' of the Ouse and the Foss, and a wide moat left much of the area around Coppergate submerged. In 1069 another revolt led to the burning of both castles and William moved on the city from where he had rested in Lincoln. The castles were rebuilt in stone this time, amid a city largely ruined by fire - including the cathedral. He held a 'crown-wearing' amid the ruins of the city to show he was still in power, had much of the surrounding land razed, homes burnt, beasts run off or killed and crops burnt to stubble. The North would not recover for over a century.

Nevertheless the city was the fourth wealthiest in England by the 12th Century, the only blot on its record being the massacre of Jews in 1190 at the site of the present Clifford's Tower (close to the present-day Castle Museum), when they fled here during a riot. A brief history describes the unfortunate episode at the foot of the long flight of stone steps..

The city was briefly given powers of self-government in the mid-13th Century. Between 1298 and 1337 York was temporarily given the status of capital city during the Scottish Wars of Independence. Boom time came again in 1360-1460 with cloth-making and trade making it the second city of England after London. A slow decline set in after 1460 despite Richard III's close links with York.

After the Tudors - to modern times

York from the 17th Century

Civil War, in particular the Parliamentary siege of 1644, proved difficult for York, although late Stuart and Hanoverian York thrived as a 'social' capital. Fortune faded again in the 19th Century, the coming of the railways notwithstanding.

The first half of the century saw George Hudson, the self-styled 'Railway King' enjoy fame as Lord Mayor of York. He was also the leading light of the York & North Midland Railway in the 1830's - his downfall due to unconventional accountancy methods was some time in the future yet, although he was not without his enemies.

The second half of the century saw York's position as a railway centre consolidated. The newly-formed North Eastern Railway in 1854 incorporated the York & North Midland, the Great North of England and the Leeds Northern railway companies and began to spread its tentacles not only north and south, but across the Pennines and to the coast. The last of its rivals, the Stockton & Darlington Railway was absorbed in 1863, with preferential exchange rates for S&DR shareholders.

Outsiders, the Midland, Lancashire & Yorkshire and London & Northwestern companies enjoyed running rights into York with York South Shed at their disposal (since demolished). The reverse of the railway boom was overcrowding, pinpointed by B S Rowntree (one of the Quaker chocolate making family) in his report.

However, due to its less intensive industrialisation, York has a rich architectural heritage. A burgeoning museum status saw York Castle's new life as a museum, with a Victorian city street laid out and the cell in which Dick Turpin spent his last hours is a magnet for visitors. York North locomotive shed (50A) has seen visitor numbers soar as the National Railway Museum on Leeman Road near the station, with its extension across the road in the Peter Allen Building. Over the river again, via Lendal Bridge, is the Yorkshire Museum with its own unique collection. See the Roman multangular tower in the gardens... There's much more to see. Visit York and see for yourself.

Visit historic York and Yorkshire with Brian Conduit, explore abbeys, priories, stately homes, preserved railways (within an hour's drive, as well as the scenic Settle-Carlisle route). Great pubs, food and drink to sustain you on your travels - whether on foot, bicycle, motor bike, car, bus or train - across the York area, Thirsk, Knaresborough and Ripon, the oldest cathedral in a city you can walk across in half an hour or less; York, the bustling heart of the county with its shops, cafes, restaurants, pubs - they get in everywhere - and sights; Leeds for a shopping experience and nightlife.

It's a big county, take a guide - take this guide.

Getting there, staying there...

Now I've whetted your appetite and you're raring to get to York, right? OK, here are a few web addresses for accommodation and tourist office information centres. There's a lot of choice, believe me.

Where I stayed last was a hotel called The Lighthorseman on the Fulford Road within a ten minute walk of the wall, the rivers Ouse and Foss and the Castle Museum. Just in case you're fading when you get there, there's a large Wetherspoon's before you get to the Castle. Alternatively there's a long bar at the Lighthorseman if you arrive in the afternoon/evening. Contact Dan Murphy, 01904 624818 or e-mail: danmurphy@btconnect.com. The address is 124 Fulford Road, York, YO10 4BE

For general tourist enquiries as well as an accommodation guide contact: Yorkshire Tourist Board, 312 Tadcaster Road, York, YO24 1GS

And now for the main web links:

And finally, has this been an introduction to an experience you'd enjoy?

After reading this would you like to visit York and create your own impressions?

And for that extra bit of York's history...