Taj Mahal A Symbol of an Eternal Love

Shah Jahan the Mughal Emperor built the Taj Mahal an iconic white marble monument in memory of his beloved third wife, Arjmand Begum popularly known as Mumtaz Mahal. This icon of love is located at Agra, in Northern India. The construction of this exquisite white marble mausoleum began in 1632 and took over 22 years to complete on an area of 1000 acres with a tomb at its centre surrounded by laid-out garden. The Mughal Emperor Shah Jahan commissioned it for his beloved wife Mumtaz Mahal as a symbol of an eternal love. This historic architectural gem has perfect blend of Indian, Persian, Turkish and Islamic architecture styles, accredited by the UNESCO as a World Heritage Site in 1983.

Arrival to the city of Agra

Our train chugged at Agra station hat appeared nondescript at that time on a winter night. It was past midnight and an eerie silence prevailed. Loads of tourists alighted, including children who broke the stillness of the railway station. People living on the platform stirred under the blanket and the train left the station after dropping us. It does not gel well that the Agra railway station can be a rail head for the magnificent Taj Mahal. Barring the ubiquitous tea vendors supplying tea in earthenware pots, other shops on the platform were closed at that hour. Shortly our courtesy vans arrived to pick us up and then we left for our hotel.

We checked into our pre-reserved hotel that was more like a lodge. Nothing to write home about it as no Mughal period photographs or of the Taj adorned the hotel walls in the lobby. It was dimly lit and no bell boys were available to take our luggage to our respective rooms at that part of the night. Added to the attire of the local people and the food do not possess the criteria for such a magnificent monument. All of us were really tired after such a tiring rail journey, so we immediately hit the bed and fell asleep. 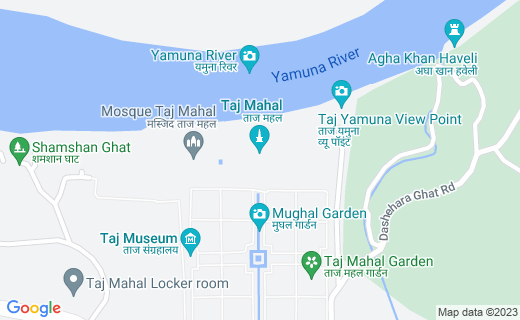 We woke up early in the morning and got ready as fast as we can. Then we headed straight for the restaurant of the hotel. We did not evince much interest for breakfast as we were keen to get into the waiting bus. Some preferred the la carte but many went for the buffet spread out. Though the tag line of menu card claimed Indian and international cuisine. The international cuisine was not very authentic yet tasty. The restaurant had maintained a certain level of cleanliness and hygiene.

Having finished my breakfast I waited for others at the hotel lobby when I helped myself with a booklet of the Taj Mahal promoted by local tourism. It gave vivid insight about the history of the monument. According to the info in the booklet, When Mughal Emperor Shah Jahan was distraught by the passing of his third wife Mumtaz Mahal. In the memory of his beloved wife, he commissioned an elaborate mausoleum to be built for her entirely in white marble.

After finishing the breakfast everybody arrived and we all bundled into the bus. Winding through noisy lanes and streets the bus moved silently through a long patch of greenery with well manicured trees in the army area. We were excited to be near the mausoleum as we spotted some Mughal dilapidated structures of archaeological values. But our excitement was short lived when we heard a big bang! The bus had a flat tyre and we had to abandon the bus.

We all walked through the street with fits and starts, presently with our bags in hand. Many shops flanked the approach road to the architectural marvel. Shops selling miniature Taj Mahal besides artifacts and relics of the mogul period were on display. Some wasted their time at these shops that claimed to sell genuine products approved by the local authorities. After lot of haggling bought wares like miniature Taj, shawls and curios the group of ladies, finally came out of the shop. However, soon we reached the designated beautiful heritage site.

Visit to the Taj Mahal

At last we saw the imposing high gate of the marvelous edifice. This beautiful gate made of red stone is called as Buland Darwaja. We could not enter the gate now, as advised by our guide. Some school children have assembled near the gate and we had to wait for some time until they get inside to prevent from getting over crowded inside the tomb. The crowds had to be regulated by the security personnel now and then.

Anyway, after some time the students started moving inside in a procession under the leadership of their teachers. The climate was pleasant due to which the teaming crowd of family and others did not get agitated following this long wait. Now we were in and the long wait bore sweet fruit, seeing Taj Mahal with our own eyes, words can’t describe the beauty of the Taj, it’s simply wow! One may fault in using an appropriate adjective to describe the beauty of this wonder build in white marble. Simple words like Wow! Awesome! May not do justice to this iconic World Heritage Site.

The Taj Mahal shines as a symbol of eternal love consists of a central gateway, a highly structured garden, a mosque, a guest house and several other magnificent buildings. The Taj Mahal the epitome of love is like a poem in marble, which is one of the most graceful and extravagant monuments in India as well as in the world.

Which is the most beautiful in the world?

The eternal beauty of the Taj Mahal

This one of the seven wonders of the world attracts millions of tourists throughout the year. This pure white marble structure has become signature monument of Indian architecture, owing to its bewitching characteristic of the soft pink color of the dawn and fiery shades at dusk. However, the most enchanting view of this pristine white and silver glory is perhaps on a full moon night.

Defining the principles of Islam and the Mughal architecture, the Taj Mahal is one of the most recognizable buildings on the earth. It’s white marble dome acts as a mausoleum of a favorite wife of the Mughal emperor Shah Jahan, which was built in between 1632 and 1648.

Every now and then, apart from taking photographs from different angles, I glanced at the booklet of Taj history that I was carrying. This historical monument is a beautiful and unique in every angle. The booklet reveals that utmost care has been taken to protect this Muslim art heritage site with manicured lawns and trees on both the sides under the aegis of the Archaeological Survey of India mandated by UNESCO.

Despite the damage by environmental pollution to the marble a very small change in color is visible at some places, while in other parts the marble seems to show cracks. Considerable amount of funds is provided for maintenance and upkeep of the building as well as its surroundings to prevent from further deterioration.

We walked on the paths of marble slabs leading to the tomb. In the center were beautiful cisterns and fountains. We were lucky enough to spot different colorful fishes in the water. Our guide said, during summer this region goes dry and the authorities may not be supplying water to the fountain in the cisterns.

At the end of the paths, there is a high platform, in the center of which stands the magnificent Taj Mahal. The four corners of the platform have four towers each. As we enter the monument we saw inscriptions in Urdu and verses from the Holy Quran on the black mosaic of the gate. We gradually moved inside the monument and the general din outside had vanished as we entered.

Presently an eerie silence prevailed as we wandered inside. It is a revered area, a certain amount of decorum had to be maintained inside the tomb. The two tombs are of Queen Mumtaz Mahal who died in 1630 and Muhammad Khurram popularly known as Shah Jahan died in 1666. The broad circular gallery around the building with the delicate filigree work and carvings are simply spell binding.

The different photographs in the booklet have revealed that, this pure white marble structure acquires different shades at different times of the day and seasons but it brightens up in a full moon night. However, even if I cherish such a desire, it cannot be fulfilled, for the moon was in the waning phase now. It took us more than half the day to go around the Taj. Moving around this magnificently and extravagant heritage monument we lost count of our time.

This visit was indeed a memorable journey for us, this one the New Seven Wonders of the World is a true symbol of love. I will pray that this monument should remain as it is till the eternity flattering the eternal love. We returned to our hotel at the end of the day, with the magic moments of the Taj Mahal captured in our cameras as well as in our memories.