Tavira a place to visit.

Beautiful Tavira, a little city in the Algarve south of Portugal, it is situated 30km away from the main airport in Faro and about 120km from the Spanish border. I was born in this beautiful town, went to school, made friends there, was close to all my family, enjoyed going to the nice sandy beaches but all good things came to an end, now i live in a four bedroom flat in England with my mum and two little brothers in a council estate.

Someone asked me once when i was about 16, why you come to England when you could be in hot sunny Portugal? My reply was, [it wasn't my choice it was my mum and dads decision, but i would rather stay here in England anyway], as i got older i realized that deep down inside of me i really missed my place of birth, it wasn't till i turned 18 that i revisited Tavira with my sister, my brother and mates.

Having not been to this place for a long long time, when i got there everything was exactly the same as it was from what i can remember when i was younger. The train station was still green and white with amazing Roman style block paving, the trains old 1980s gasoline powered, the people very friendly, the food is really something else, Portugal can offer you the best food in Europe, from delicious fish dishes to meat, salads and traditional dishes like feijoada, cataplana, also there range of traditional home-made soups are great apatite starters, overall that's what i missed the most about Tavira the food the people the beaches and the beautiful Roman buildings, bridges that still stand to this day.

Tavira as become more and more popular than its ever been before, because it don't matter if your young or old, Tavira has allot to offer you. If you like to site see then you can, this towns history dates back to the late Bronze Age (1.000-800 BC) so there's lots of history for you to find out about, there's 37 churches in this town, one of which dates back to the 16th century, lots of castles built by Romans and Moors, you can still find houses in Tavira that date back to Roman times, most of Tavira has been rebuilt with many fine 18th century buildings.

Travelling around Tavira: you can take a sight seeing guide tour which will take you all around this beautiful city to all the historic places, all guides speak English which will make it easier for you to ask any questions you may have about Tavira. Another thing you can do is go exploring by yourself, this way you get more freedom and you can spend as much time as you want on a particular part of the city, as when on sight seeing they use a kind of tram but smaller to get you round the city, which means you have to sit on a ride for a long time.

If sight seeing is not your thing and you want to party or want to do something a bit more lively then you can hit the pubs, clubs, also they have a place called DOCAS which basically about ten bars all in a row, with loads of tables outside in an area that can sit at least 400 people, these bars only open at night, its like being in a club but out-side, its amazing really good time. You could also check out Ilha de Tavira (Tavira Island) which holds a blue flag for having the most environmental beach in the Algarve, its really a beautiful beach, the water are quite warm, but sometimes in the mornings they are cold, but by the afternoon they warm up again.

At night between August and October sometimes you will find the locals staying on this Island over night jamming on there guitars and bongos, as the island has got loads of bars and restaurants, all these bars start playing music after 9pm. But after all these bars close the local people all start heading towards the beach to carry on the party, this is where they light a bon-fire from logs and bits of wood they find. They borrow a generator from one of the bar owners who helps set every thing up as he himself is quite young. I have been there two times and let me tell you, best time i have ever had.

The Taxi fares in Tavira are quite cheap if you are only travelling around town, but they do offer a good service there cars are all fully fitted with air con and i also noticed most of them were Mercedes, very comfortable. The Buses i only used to get outside of Tavira as they are cheaper than getting the taxi, The only times i used the Trains was getting to and from Faro airport to Tavira which takes approximately 30 mins. I don't drive so i did not use the Hire car service, if you forgot too book it then you can find a Hire car service in Faro airport itself, or just wait till you get to Tavira and you will also find a hire service here as well. If have not got a car driving license, you could of course hire a Mo-peds which are allot of fun to ride around Tavira, but you will still need a provisional license to show to them, if not you can always hire a few bicycles for a day or as long you need it for, they came in handy sometimes, you will also get a chain to lock your bike up with, so it don't get nicked.

You will also find a Aqua taxi service which takes you straight from Tavira to the island where the beach is, other wise you have to wait for at least 25mins for the main ferries to get across the river at quatro aguas dock, but if you use the aqua taxi it takes about 10mins. They will also take you to other beaches in the Algarve from Tavira, which is handy because you might get bored of the same beach. There are many beaches in Portugal, but by far the Tavira Island is the best and most clean beach i have ever been too in the Algarve.

Hotels in Tavira and places to stay

The Hotels in Tavira, You will find about 30 hotels not including the bed and breakfast, they all range from 3 star to 5 star, the 5 star hotels in Tavira town that i recommend is hotel Vila Gale it is situated in the center of the historical and beautiful city of Tavira. Also look about for bed and breakfast, motels in Portuguese they are called pensao. Of course if you looking for something else you could rent a villa or apartment to stay at, even if its just outside of Tavira there's plenty of transport available at nearly all times.

If you like camping there are at least 9 maybe 10 beautiful places to camp at in Tavira, nearly all of them are near the town centre and the beach, so you are not far from both, the camps are secured and rarely any items go missing from tents, as GNR the local police patrol most of these camps, to tell you the truth most people are scared of the GNR police in Portugal as they are known to have beaten prisoners up in the past, but rest ashore the people are not like that, most of them are very friendly and always having a laugh.

If you never been to Tavira i suggest you put it on you to go too list, if you live in London or any where in Europe the most you going to pay for a ticket, lets say for a week too Portugal its going to cost you about 70 pounds return and probably double that for a two week stay, but what i have noticed is the longer you stay the less you pay, i managed to get a ticket for 145 pounds to Faro in Portugal for three weeks, which was cheap, i think it was with Ryan air.

Taviras architectural attractiveness really has attracted many new visitors from all over the world, and the house prices have increased very sharply. The development of many golf clubs close to the town has also had an effect on Tavira, as the Algarve is very popular for there wonderful golf courses, some are considered the best in Europe. Portugal Algarve also got named as the new Ibiza in the year 2000, because of the good quality clubs and bars that are available to you, this caused Taviras popularity to grow amazingly over the years.

The municipality of Tavira is split into 9 freguesias or parishes as follows:

Tavira is a Portuguese wine region centered around the Tavira Municipality in the Algarve region. The region has Portugal's highest wine classification as a Denominação de Origem Controlada (DOC). Extending to the Spanish border, the region is flanked on the west by the Lagoa DOC. The principle grapes of the Tavira region includes Crato Branco, Negra Mole and Periquita. Most of the wines you will find in the bars and restaurants they all came from local suppliers, in fact you can check these farms out for yourself, sometimes the farmers will give you a glass of wine to try out and take you round the farm. Me as i speak Portuguese i kindly asked the wine farmer if i could buy 10 bottles of this wine from him, so i can take back to England, with a bit of persuasion he gave in and sold me the bottles for a very reasonable price.

(Ilha de Tavira) Tavira Island south of the town of Tavira, Portugal, just a few hundred metres off the coast. It is 11 kilometres long and varies between 150 m to 1 km in width. The island has 11 km of the best sandy, clean water beaches in the Algarve, including areas where naturism can be legally practised, so try stay away from this side of the Island if you taking your kids. It is part of the Natural reserve of the Ria Formosa, it is also popular among tourists, people that like to swim and also bird watchers. Access to the island is only available by ferry, but you can cross over a small floating bridge in the Santa Luzia/Pedras d'El Rei area.

The 9 freguesias or parishes of Tavira 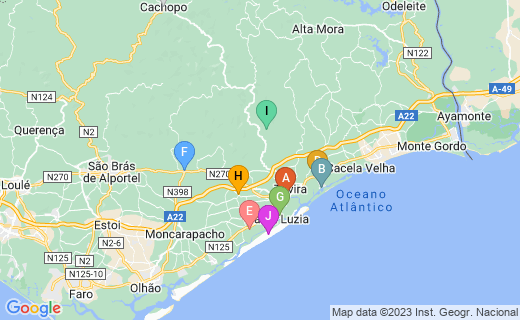 Tavira is about 30km from the main airport in the Algarve south of Portugal.