Tea and Scones Tenerife Style in the Sunny Canary Islands

A very English experience on a Canary Islands hilltop in Tenerife

Last time I went to the Agua Garcia area to visit my friends Emily and Fernando it was, aptly for a village with water in its name, a very wet day but not so on this occasion when the sun was shining brightly and the temperature was hot. I had been invited to a tea party at the Mazah Ribah cultural centre and the weather was ideal for such an event - balmy and warm. 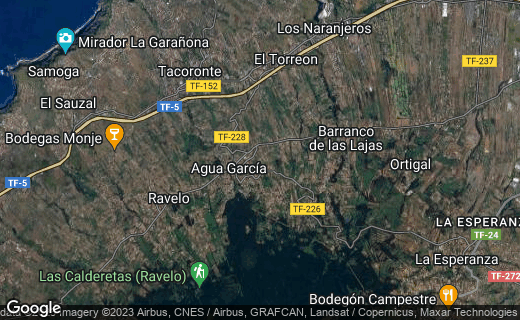 I got off the bus at the turn off for Tacoronte and walk uphill to Agua Garcia and then on to Baranco las Lajas where my friends live. Because the road is very steep and it was a hot day I thought I would try an alternative approach and took another road leading that way that looked more on a level. I was wrong though, because this way also went steeply uphill and I was sweating profusely and grateful for any breaks along the way that presented themselves.

I saw a very large bush of the Tamarillo or Tree Tomato (Cyphomandra betacea) growing in a garden and it had fruit and new blooms at the same time. I must admit I felt tempted to pick one of the juicy red fruit but instead of doing so I am making my confession to you.

At last I arrived at my friends' house, which is at the top of yet another hill and rather than have a hot cup of tea I quenched my thirst with a cold can of Dorada. Emily took me to see the garden behind the house and it was definitely my sort of garden! I would give it Tenerife garden of the year award and top marks, I said.

I saw lots of pretty wild flowers growing alongside the road and so took a breather to admire them. There were masses of red poppies just like you used to get in British cornfields, there was the everlasting pea rambling wherever it could and all sorts of other blooms making a positive blaze of colour. In one spot there was a huge clump of the gorgeous Red Valerian growing in a crack at the side of the pavement.

Eventually I arrived at the road that takes you up into Barranco de las Lajas to the house where my friends live, which is painted green. The whole area is full of lush greenery and I even spotted a big patch of dock leaves at the roadside, just like the ones in Britain that are a good remedy for stinging nettles. Honeysuckle was in bloom in a hedge looking just like it does back in the UK.

What I so loved about her patch of land was the way it was all so wild and and full of vegetation. I could see useful weeds I know from the UK, like Chickweed (Stellaria media) that makes a great addition to salads and the dainty and also edible little Shepherd's Purse (Capsella bursa-pastoris ) with its tiny heart-shaped seedpods.

Emily showed me a large bush of Cape Gooseberries (Physalis peruviana) and we enjoyed eating some of the tangy fresh fruit shrouded in their Chinese lantern-like outer husks.

A plum tree was covered in young green fruit ripening in the Tenerife sunshine and in the corner there was a homegrown Avocado tree. There was a huge clump of fragrant Fennel (Foeniculum vulgare) flourishing against the wall and it put to shame any of the other examples of this herb I have seen anywhere else on the island.

What is the Chayote Squash?

What is a Chayote?

Emily gave me a vegetable I had not seen before, which is called a Chayote (Sechium edule). It is a rambling vine and a cousin of the marrow and cucumber but is a bit prickly and also has the unusual habit of sprouting from the fruit. My friend suggested I might like try growing one and I would, but when I got it home later on and planted it my cat Little Boy thought it was some sort of animal or a toy and kept hooking it out of the pot and throwing it about on my balcony!

By now the guests had started arriving for the tea party, which was held out on the patio in the shade of yet another plum tree. People sat chatting on the steps in the dappled sunlight or at the little tables, which had cakes and scones with jam and cream.

There were all sorts of types of tea to choose from with herb teas and green teas and iced teas and teas I had never heard of. But I was feeling peckish and ignoring my waistline I tucked into some cake and a very yummy chocolate mousse.

I thought to myself how unusual it was to be doing something so very genteel and British. With the plum trees and the honeysuckle in bloom in the hedge it was like an English country garden but this was in a village in the mountains of Tenerife. Anyone for another cuppa?