Tokyo: A Blend of Modernity with Tradition

Tokyo is a city that stands out from most other modern cities of the world, in terms of the manner in which it blends modern technology with traditional culture. One can think of it as the Eastern version of developed world at its best.

As one of the leading cities since the late eighties when it reached its zenith, it showcases all that modern technology has to offer. What makes it so different, is its people who still cherish a strong core of Asian traditional values and a unique culture that has been strongly influenced by Zen Buddhism, which lays down the ways of living without being fanatical about religion.

Here are the ten places one can visit during a short tour to the city of Tokyo. These are all places situated within the heart of Tokyo.

The Tallest Tower in the World

Tokyo Skytree is the tallest tower in the world, standing at 634 meters (2080 ft). It is the second tallest structure standing after the BURJ KHALIFA in Dubai. Opened for public on 22 May, 2012, it has observatories called TEMBO DECK (350 m) and TEMBO GALLERIA (450 m), for which tickets are available at 1000 yen and 2000 yen respectively. Skytree is a broadcasting tower, which was necessitated by the incapacity of Tokyo Tower to cater to broadcasting needs due to a large number of tall structures that surround it.

The Seat of the Emperor of Japan

The Imperial Palace has been the seat of Emperor's residence since 1868. The Japanese Emperor is one of the longest running royal dynasties in world history, with a unique record - no Emperor of Japan has ever been assassinated! The Palace, situated in what was earlier the EDO CASTLE, is mostly closed for public entry, except for the East Gardens and the Imperial Household Agency. The EAST GARDEN houses several structures including the PEACH BLOSSOM MUSIC HALL, the MUSEUM OF IMPERIAL COLLECTIONS, NINOMARU GARDEN and the TEAHOUSE. To the South of Palace is the KOKYO-GAEIN, a large public park, whereas to the North is KITANOMARU PARK.

Through the Imperial Palace: A Royal Journey

Travelling Around the World

The Face of Tokyo & the Center of its Nighlife

Roppongi Hills is not really hills. It is a building complex housing showrooms, restaurents, apartments and shops around a Hotel, an Art Museum and a tower. MORI TOWER, at 238 m, is one of the tallest structures in Tokyo, with the top floors used as TOKYO CITY VIEW Observation Deck and MORI ART MUSEUM, which is open up to 10 pm (except Tuesday when it closes at 5 pm). The City View is open up to 11 pm and costs 1500 yen, but the SKY DECK closes at 8 pm and needs another 300 yen. Needless to say that evenings are the best time to visit Roppongi Hills.

A Visitor goes to Roppongi Hills

The Intersection of Almost Everything

Shinjuku is one Metro Station that you are likely to pass through, irrespective of what your itinerary might be. It is one of the largest intersections of different metro lines, many of which leading to outside Tokyo. Its main attractions are the close-by TOKYO METROPOLITAN BUILDING, which at 248 m (814 ft) and 45 storeys, is one the tallest buildings of Tokyo. Its top floor has an Observation Deck, which is free, and provides a great view of MT. FUJI in the morning, when the Sun is behind. Other attractions around Shinjuku are its shopping complexes that include TAKASHIMAYA, SAKURAYA, BIC and of course KINOKUNIYA, the largest book store in Tokyo.

Ueno Park is one of the first public parks of Japan, and the most popular of them. Established in 1873, it houses 8800 trees and almost 25000 sq m of shrubs. It has a small lake called SHINOBAZU POND, which is an important wintering gound for birds. The attractions of Ueno Park include historical structures and museums. These include a five storey PAGODA of KANEI-JI(constructed in 1639) and KIYOMIZU KANNONDO (constructed in 1631).The museums include TOKYO NATIONAL MUSEUM, NATIONAL MUSEUM OF WESTERN ART, NATIONAL MUSUEM OF NATURE AND SCIENCE, SHITAMACHI MUSEUM and TOKYO METROPOLITAN ART MUSEUM.

The Most Controversial Shrine in the World

Yasukuni Shrine, established in 1869 and located in Kudankita in Chiyoda is important because it is dedicated to those who gave away their life in the service of Japan. It is said to house 2.46 million KAMI, meaning souls of the dead, including a large number of those killed during the second World War. As the only place to which the Emperor of Japan bowed, it is held in high esteem in Japanese tradition, but the enshrinement and glorification of the Japanese soldiers, including 1068 who were executed as war criminals in 1959 also evokes sharp and passionate reactions from countries that suffered at the hands of Japanese aggression in second World War. The structures in the shrine include HAIDEN (main prayer hall), HONDEN (main shrine) and the REIJIBO HOANDEN, the house of the Symbolic Registry of Divinities or Kami. Like all Shinto Shrines, Yasukuni also has a number of TORII (gates leading to the prayer hall) as well as statues in memorium of Japanese patriots.

Yasukuni during the Middle of Cherry Bolossom

The Manmade Island of Tokyo

Odaiba is a small island adjoining Tokyo, reclaimed from Sea with the use of modern technology and resources. It is primarily a center for enjoyment and leisure, though it houses Hotels, apartments, offices and shopping malls. The structure that highlights Odaiba the most is the RAINBROW BRIDGE, a circuitous bridge connecting Odaiba from mainland, with a road and a metro rail. The driverless YURIKAMOME RAIL, which does not run on rail tracks, continues to be an attraction, primarily because of the views it offers, especially in the front seat.The attractions of Odaiba include OEDO ONSEN MONOGATARI - a hot string theme park, AQUACITY and DECKS TOKYO BEACH. There are also two famous museums, MIRAIKAN (National Museum of Emerging Sciences) and MUSEUM OF MARITIME SCIENCES.

A day in Odaiba

Asakusa and its adjoining Nishi-Asakusa (West Asakusa) are areas that offer the best glimpses of traditional Japan to a foreign tourist. It has many old traditional building that could survive the Tokyo bombing in the Second World War. The most important of them all is the ASAKUSA TEMPLE, also known as the SENSOJI TEMPLE. The lanes of Asakusa are thronged by very large number of people during the Shinto festival of MATSURI. Asakusa also has many traditional guest houses, called RYOKAN. Its proximity to SUMIDA river also offers the visitors an opportunity to take the river cruise to other parts of Tokyo, including Odaiba.

A Trip to Asakusa Temple Area

The most famous Electronic Market in the World

AKIHABARA may not hold today the same charm for the curious visitors from all over the world, as might have been there a decade ago, when it used to be the first place in the itinerary of most tourists. Yet, it is a place worth visiting, for it offers a variety of shopping optiions for visitors of all budgets. It is unlikely that a visitor will not be able to find something interesting enough to buy during a visit to Akihabara. Additionally, it also has some of the best shops for Japanese souvenirs, particularly its gold plated pottery that is unique in terms of design and famous for its technical finesse.

Akihabara: The Electronic Town of Tokyo

The Towering Symbol of Tokyo

Tokyo Tower may have lost its place of eminence as the tallest tower of Tokyo to the much taller Skytree. Yet it stands in the middle of what can be considered as the heart of Tokyo. From the city center, it towers around the other centers of business and power, making it virtually the most visible symbol of Tokyo. Modelled on Eiffel tower, it is 333 m tall, 9 m more than Eiffel, but weighs only 40 % of its weight - a trubute to Japanese technology.It has two observatories at 150 and 250 m, which offer a 360 degree panoramic view of Tokyo. The best time to visit the Tokyo tower is just before the Sun sets. It allows both day and night views of Tokyo City. One can proceed from Tokyo Tower to Roppongi, which is not far away to make the best use of time.

Tokyo: The Largest City of the World 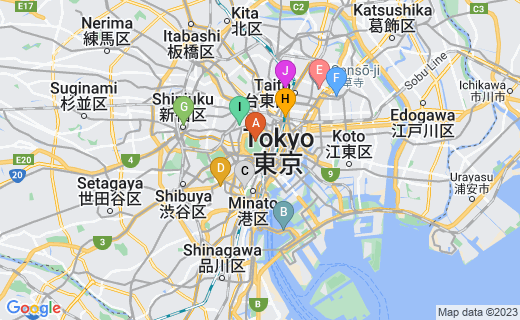 Which of the places would you be most interested in visiting, if you were on a visit to Tokyo ?