The Beatles LOVE: A Las Vegas Show Worth Seeing

The Beatles LOVE is a "Rock n Roll poem" as described by Cirque de Soleil in which some of the most famous and popular Beatles songs create a story that takes the audience through an amazing world based on the lyrics. Since it is a Cirque de Soleil show the performance revolves around stunning acrobatics and dancers with elaborate sets and effects. The show is about 90 minutes long, but once you get in it time seems to fly by. The theater is a round arena theater, but no matter where you are sitting you will be able to see the performance without missing anything. Personally, I would recommend sitting just below the balcony, but not too close to the stage and I will explain why a little later. Overall, my wife and I were amazed at how the performers were able to turn their interpretations of the songs into very elaborate routines to tell an amazing story.

The Mirage Hotel and Casino

First off, how do you get to the show? LOVE is performed at the Mirage Hotel and Casino at the center of the Las Vegas strip next to Caesar's Palace and across the street from the Venetian. From the strip, you could either enter the casino from the side closest to Caesar's Palace under a shaded walkway with some dolphin statues, or the main entrance where you can drive up for valet. Either way, once inside all you have to do is simply walk straight back (if you came through the main entrance with the small indoor garden you should be able to see it from the enterance). If you get lost simply look up at the signs as the theater is heavily advertised, and if you are in the vicinity you can't miss it as it has a big Beatles LOVE sign and the ceiling of the hallway is painted with a British Flag. The box office is right there too if you want to buy your tickets in person or need to pick them up. There is also a decent sized Beatles gift shop (however prices are a little high since it is Las Vegas after all). 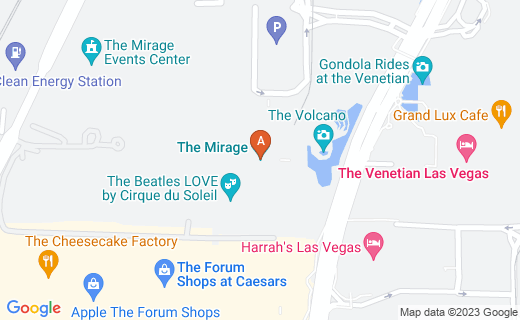 LOVE is performed at the Beatles LOVE Theater inside the Mirage Hotel and Casino in the center of the Las Vegas Strip.

So what exactly is the show? Well, it is a very interesting story based on the lyrics of famous Beatles songs. This being said there is no dialogue, except for a few sound clips from Beatles performances and interviews, so the exact message of the performance is up to the viewer's interpretation which provides somewhat of a personal experience for everyone. The show begins in the 1940s during the end of WWII when the Beatles were all kids, and follows their story as they rise to fame throughout the 60s, and the show ends presumably in the late 1970s or possible 1980. The children from the beginning of the show seem to represent the Beatles in their youth, and they are present throughout the show's entirety as youth is a big theme in the songs and performance. Images and videos of the band are projected across the theater and provide context to the performance, as well as a sense of actually being with the members of the band at some points. While all you need is love, the show does touch on many emotions as it takes the audience through some of the personal moments and lives of the Beatles.

Along with the many talented acrobats that come from all sides of the stage, above it, and even from below the stage, LOVE prides itself on many amazing special effects. I previously mentioned the projection of some real pictures and video clips of the Beatles, however, there is some kind of special effect every second of the show. Whether it's the performers interacting with lights on the stage, a cloud of fog pouring out of a van, from under umbrellas, or even out of a strange man's tea kettle there is always something interesting that will catch your eye. The one thing this show does very will is transforming the theater to match the setting on stage. One minute you're in war-torn London, and the next you're at a circus or a concert, or even under the ocean! But, remember how I recommended not sitting too close to the stage? Well during one of the acts a large cloth comes across the audience to make the audience feel like they are in the ocean, but it stops about halfway up. This left the upper half of the audience able to see the performance above the "sea" while those under the cloth were not able to watch. They did, however, send a few dancers under the cloth to keep those audience members entertained. The absolute worst part of this, however, is that those sitting where the cloth stopped constantly had it waving in front of their face and I saw some clearly unhappy people as they were constantly trying to sit up to see above the cloth or slouch down to see the dancers under it.

While the show was amazing and the highlight of my vacation in Las Vegas, there are some minor things that I thought prevented it from getting a perfect 10/10. I say 8.5 because there are some minor things like I said, but an 8 just sounds a little harsh. First, the costumes, characters, and some of the acts seemed a little off. Knowing the Beatles I knew what to expect with the interpretation of some of their songs, especially those with drug references. However at times some of the characters seemed out of place with the story, or an act seemed to be more of its own side story than actually a part of the whole show. But, that is just my opinion and since the beauty of music, and the show, is that it is always open to interpretation of the audience which is why it didn't really bother me that much and wouldn't knock off that many points. The main critique I have is that while they chose really good songs for the show, they missed a few opportunities with some other famous and popular Beatles songs. The most popular songs were either an act during the show or they mentioned briefly in a few seconds long sound clip, however, I felt like something more could have been done with those songs or even some of their less popular songs could have been included. That being said, a very few of the performances were a little bland, by that I mean the song had a lot of potential for the performance, but there was not much happening or your attention is directed to a single spot on stage whereas the rest of the show has you looking everywhere. The one that stuck out the most was the performance for "Here Comes the Sun" which had a big overall scene and setting, but the performers didn't do much compared to every other song.

All You Need is LOVE!

Overall, Beatles LOVE is a great show that I would recommend to anyone visiting Las Vegas. I am personally very happy I spent a little extra money to be under the balcony and closer to the stage, but even happier I wasn't covered by the ocean. Even the employees in the lobby are in the Beatles spirit with impressive costumes and a loving attitude. For more information, you should visit the Cirque de Soleil website as they even have a few pictures from some of the songs performed, however, if you are buying tickets online I would recommend looking at the prices at Vegas.com because in my case they were a little cheaper than buying them directly through Cirque de Soleil or Mirage.

If You're Still Undecided, Check Out the Official Trailer!

What do you think about LOVE?

Have you seen the Beatles LOVE? If so, what did you think?