Tucked away, on the banks of the River Severn, is a little piece of Eden. A place where one, can experience one of the best days out you can possibly have in the Midlands, if not the entire country. I’m talking about the Wildfowl and Wetlands Trust Reserve in a small part of Gloucestershire known as Slimbridge; the reserve bears the same name as the nearby village, which is everything you imagine an English country village to be. It’s a place that I go to every year, and have been doing so since early childhood.

Over the years, I’ve witnessed a lot of changes to the reserve; I can still remember when Slimbridge consisted of an ageing, rickety visitor centre with very few amenities, plenty of lakes, pools and trails and a few birds hides dotted around. Today, the place is barely recognisble, everything has been jazzed up, new buildings, new exhibits, seemingly new everything. Once upon a time, seeing large numbers of families at Slimbridge was comparatively rare, the place served as a domain primarily for the avid birdwatcher, which included one very wide eyed child, me.

So what exactly is Slimbridge, and what does it have to offer? Well, in basic terms it’s a nature reserve, mainly geared for animals that dwell in a wetland habitat, it also serves as home to among the most fascinating collections of exotic wildfowl you’ll see anywhere, including the rare Hawaiian goose or Nene. The Nene only exists today thanks to the extraordinary efforts of Slimbridge’s founder, Sir Peter Scott, son of Scott of the Antarctic. He's also one of the founders of the World Wildlife Fund. The beautiful Hawaiian goose was saved when Scott brought the last known individuals back from Hawaii and initiated a breeding program, which was unique at the time, but succeeded in saving the species; although it must be noted that the Nene’s survival still very much hangs in the balance back on its native land, so places like Slimbridge act as vital life rafts, for them and many other rare species, including the Madagascan Pochard, thought once, to be extinct but are now breeding at Slimbridge.

The Location of Slimbridge 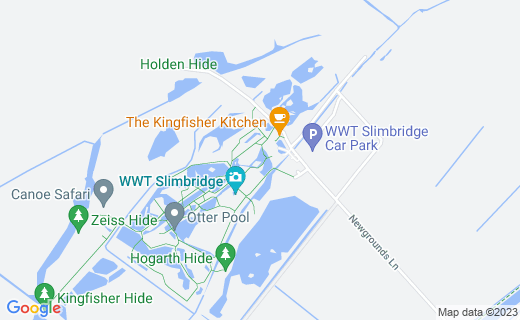 I tend to go to Slimbridge in the winter, just after Christmas, it may sound daft, but it’s the best time to go, if you’re a birdwatcher at least. The reason is straightforward, in the depths of winter, Slimbridge acts as a base for many migratory species including Bewicks swans, Whooper swans, pochards, tufted ducks and many more.

The journey from my home, just south of Birmingham is roughly 60 miles; ordinarily for an Englishman travelling that sort of distance is quite daunting. But I’ve made that journey so many times, that it’s simply like strolling down the road, each landmark is familiar, like an old friend welcoming me home. I try to avoid long stretches of motorway driving, as it can be incredibly tedious and boring. So I prefer to take a more scenic and altogether more pleasant route.

Eventually, after a short stint on the M5, we start following the brown tourist signs ‘WWT Slimbridge’ every time I see them, my heart beats a little quicker, just a few more minutes and we’re there. In no time at all, the monotony of the motorway is forgotten, and once again I find myself smiling at the gentle rolling farmland, so characteristic of Gloucestershire and the rest of the West Country. Very soon, I spot the spire of Slimbridge Church off in the distance, and my mood lightens further.

Slimbridge Village is quite simply the perfect example of an English village, an elegant, ancient church, pretty cottages, the small shop that sells everything, the manicured village green and the smelly farms with many noisy residents. The roads are small, narrow and wind and bend sharply, providing a stimulating challenge for even the most experienced driver. One rather awkward obstacle is a bridge that crosses over the Gloucester and Sharpness Canal. The awkwardness lies with the fact that the bridge has to be raised whenever a boat approaches, so you have to be vigilant. Also, it’s only wide enough for one car to pass over, so again vigilance and patience is of paramount importance.

Images of the Village

One of the strange things about Slimbridge is how quiet it all feels, once over the bridge, the visitor centre is in sight, but it all seems a little too quiet and deserted. There aren’t many other cars on the road, but as you draw nearer, and then eventually turn into the car park, you realise that the quietness was a cruel mental illusion. Most of the tarmacked parking area is full, so I take a right and park on a patch of grass in the overflow car park.

Each time, I’ve been to Slimbridge in recent years I’m always amazed at the amount of children present, it almost makes me feel that somehow I don’t belong here, and that I should have outgrown this place long ago. Into the visitor centre and you’re greeted by an enthusiastic volunteer, tempting you with offers of membership. I don’t like to demean people who try and promote conservation, so I smile and mutter a quick ‘no thank you.’ Unlike many attractions, queues are rare, within less than 10 minutes of me getting out of the car; I’d paid my fee and walked down a sloping path to the ground floor.

At this juncture, you can walk through a decorated corridor, awash with scenes and indeed noises from the wetlands. Once through the corridor, you come to a desk, where some more of those eager and friendly volunteers sell food for the birds for about £1.50. As a child, I eagerly pleaded with my mom to get a bag, but as an adult, the food gets barely a second glance. Instead, my attention is drawn to the outside, to the masses of swans and geese in the pools and lakes just a few feet away.

Essentially you follow a carefully planned route that takes you around different sections, all named and themed after a particular area of the world, for example you have the ‘Arctic Pen’ which contains wildfowl native to the tundra; even the landscape has been shaped to at least resemble the frigid north. There are also areas devoted to Africa, Europe, the Americas and Australia. One highlight to look out for, are the various species of flamingo dotted around the reserve, each with their own lake all to themselves. As a child, I used to love watching them feed their young chicks in the summer and use to laugh whenever two of them had a disagreement.

In recent times, Slimbridge has tried to market itself as more than just a collection of rare and beautiful wildfowl. It’s trying to increasingly promote itself as a place where conservation of British wetlands is at the forefront of its priorities. The new ‘Back from the Brink’ exhibit showcases rare native mammals, and also provides people a chance to glimpse not only otters, but also beavers, which haven’t been present in the Midlands for centuries.

You can also jump on a canoe and experience a ‘safari’ through the wetlands led by an expert. I must admit that this isn’t something which really appealed to me. There’s also a tropical house, which I haven’t been to for many years, but from memory it can be a very surreal experience, especially when you enter wearing multiple layers of cold weather clothing.

The Australian Pen at Slimbridge

More of the Birds and Slimbridge

As a birdwatcher, my trip to Slimbridge is about nothing more than simply wanting to enjoy watching birds, and despite all of the new attractions. I can still go and sit in the same bird hides I’ve known all my life. Although you have to be a pretty hardy soul to do so in the depths of winter, but despite being barely able to feel my fingertips, my heart remained warm as I glimpsed thousands of lapwings taking to the air as one, filling the sky with blackness. After a while, they settled down and I resumed enjoying the gentle landscape spread about before me. In the distance is the Severn itself, and beyond that the Forest of Dean, once one of many Royal hunting forests dotted all over England.

For those who’d rather not freeze to death in a bird hide, you can opt to watch birds in the very comfortable Peng Observatory, a huge room with massive windows overlooking a huge manmade lake packed full of wildfowl, and I mean ‘wild’ the birds here have very little contact with people and are thus naturally fearful of us, the only exception being the wardens that feed them at various times throughout the day. For me, this is the highlight of the entire trip. I love nothing more than simply to sit back and enjoy the view, and perhaps enjoy my packed lunch at the same time. Slimbridge does have a restaurant; I have eaten there in the past, and the food is generally good, but it's a little too crowded and noisy for my liking. In the summer, they’ll often sell burgers straight from a barbeque.

On my last trip, I took up my customary position on one of the many chairs provided by the staff, dug out my packed lunch, and ate idly as I scanned the horizon. The man next to me was more of a hardcore birdwatcher than me, possibly a twitcher. I overheard him talking to a member of staff, enquiring about a possible sighting of a golden plover. He took out a notebook and started making notes frantically, while allowing himself a quick glance at the scene in front of him, before returning to his scribbling. All of a sudden, something caught my eye a young Bewick’s swan was foraging close to the lake shore. He (I think it was he anyway) started kicking, obviously disturbing the mud at the bottom in order to wheedle out something tasty. But what was fascinating was that close by were several diving ducks, mostly pochards and tufted ducks; each time the swan kicked they all dived in unison, probably trying to get themselves a free meal. By and large, the swan tolerated the ducks until one got too close and earned a sharp peck for her trouble. It was such fascinating behaviour, the ducks had clearly been doing this for some time, and yet it had seemingly gone unnoticed, even by the birdwatchers that shared the observatory.

Slimbridge is a place where you can escape modern life for a few hours, even as you walk out of the door, you still feel happy, almost lightheaded. It’s difficult to understand why, but I think it has something to do with the sheer abundance of life found there. I earlier described Slimbridge as an Eden, and we always associate the Biblical garden with abundance. For a day out, there are very few places that can match Slimbridge, people of all ages can enjoy it, but more importantly it’s a place that can help educate children about our world, the natural world and its importance both to us and the creatures we live alongside. I would recommend Slimbridge to anyone, even if they’re not particularly interested in birds the same way I am, it’s still a mesmerising experience.