The cross town classic between the Chicago Cubs and the White Sox was a great first game to see in the infamous Wrigley Field. As my husband and I exited our cab onto the sidewalk in Wrigleyville prior to the game a frenetic and wild energy hit us. Fans in Cubs and White Sox attire filled the streets around Wrigley Field. Captian Morgan's Club was bursting with rowdy fans downing plates of Chicago dogs, ballpark nachos, and beer as a band played next to them.

The Cubs Store is located right across the street from the Wrigley field stadium and has just about everything a fan could possibly want. It was fun browsing the shelves and racks filled with banners, T-shirts, hats, mugs, key chains, and gifts to name a few. Our son met us here and we all headed over to the park.

Filing through the main gates with the crowds as if on a conveyor belt we split off to find our seats, food and drinks. It was a clear, hot and sunny evening for the start of the game so sitting under a protective awning was nice. The layers of sun screen I'd slathered on turned out to be unnecessary, but better safe than turning into a lobster after nine innings.

I bought a salted pretzel from a stand located above our seats and waited for a vendor hawking through the stands to get a drink. They came through the stands every five to ten minutes yelling, "hot dogs, peanuts, beer, water and pop." We found this was the way to go because the lines on the main floor for food and drinks were super long. You could easily miss a big chunk of the game waiting in one of them.

In front of a crowd of forty thousand fans a special NATO flag ceremony was presented. A flag representing each of the twenty eight countries within NATO were held by American military personel. The ceremony was very grand and beautifully done.

Within the crowd sat Secretary of State Hillary Clinton and Senator Dick Durbin. We didn't realize this until we saw the news in our hotel room later that night. We did see General John R. Allen USMC throw out the first pitch though. When he did the entire crowed cheered and roared their approval.

Sitting in Wrigley Field on May 19, 2012 watching the Cubs play was a special time. Over the years I'd heard about Wrigley Field and how great it was to be part of a game. It wasn't until I sat in the stands myself surrounded by thousands of fans singing "take me out to the ball game," shaking the rafters the magic of Wrigley hit me. I was caught up singing right along with them. Even though the White Sox beat the Cubs 7-4 that night I had wonderful time cheering for the Cubs. I can't wait to go back to Wrigley and see the Cubs play again. They're due for a WIN!

Do you believe in the "Billy Goat" Curse? 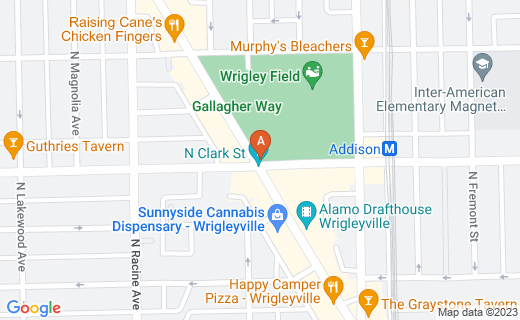 Wrigley Field Home of the CUBS