Kami, Shrines, and a Rich History

Japan has many incredible historical landmarks that are breathtaking, mind blowing, and simply magnificent. The Fushimi Inari-taisha Shrine in Kyoto is one such destination you must visit at least once. Here I will outline where the shrine is, what shrines are, a discussion of who or what Inari is, and present some videos and maps of the shrine.

As a historian I have focused a few years on Japanese history and culture, studying a lot of Japanese art history, and enjoying a lot of the fascinating facets of the rich cultural history Japan brings us. I hope that I am able to impart both a bit of knowledge and interest to you here as we explore this amazing place together.

Kyoto has a very long and rich history. For 11 centuries this city was the capital of Japan. With 1600 Buddhist temples and 400 Shinto shrines (totalling over 2000 religious places), Kyoto is a huge cultural and religious destination. Considering there are many architectural sites such as palaces and gardens that are still intact after the centuries of progress, this city is one of the best preserved cities in Japan if not the world.

In World War II we almost lost this city as it headed the list of atomic bomb targets. However the Secretary of War for the US stepped in and removed it for many reasons, ranging from not wanting to lose such a rich historical city to the fact that he thought that if Kyoto was bombed the war would never end. (Think of it like someone bombing the Vatican.) The world is a much better place for the removal of Kyoto from this horrible list.

By playing with the map below, especially the satellite view, you can start to see just what an interesting mix of the really old (Inari-taisha Shrine for instance) and new growth in the area. 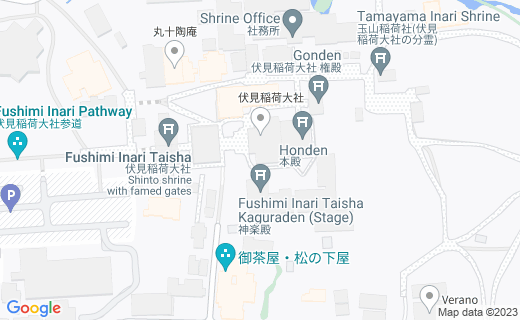 Who or What is Inari Okami?

Firstly, kami is loosely translated into "god". It is divinity, a supreme being. In Shinto it is natural forces, spirits, or essences of things. They can be as strong as deities or just essences of things like trees.

Inari is one of the principle kami of Shinto: the kami of foxes, industry, rice, fertility, and agriculture. More than a third of the Shinto shrines in Japan are dedicated to Inari, totaling 32,000 shrines. Recorded worship can be seen around 892AD but she still remains a popular diety today. Inari was, historically speaking, in the right place at the right time. In both Buddhism and Shintoism the name spread from victory to victory and she got credit for more and more, ranging from stopping fires to protecting warriors. However with the separation of Buddhism and Shintoism, Inari mostly came to be the kami of the foxes, industry, rice, fertility, agriculture and worldly prosperity she is today.

Japanese Shrines: What is a Shrine?

What is in a name?
Shrine names can be very descriptive and hard to understand, but here I will generalize what they mean.

The first part is generally the shrine's proper name.
The second part of the name defines the status of the shrine.

For instance the Fushimi Inari-taisha Shrine. Inari is the one the shrine is dedicated to, and the second word, "taisha", means "great shrine" to set it apart and tell people how important it is (rather than something like hokura which would be a tiny shrine at the side of a country road). Fushimi is the area of Kyoto the shrine is in, so we come to the meaning of Fushimi ward of Kyoto's Great Shrine of Inari.

Tori(i) Gates
Tori are mainly found at Shinto shrines, but can be found at Buddhist ones as well. This gate symbolizes the transition from the profane to the sacred. They can either be red as the ones at Inari-taisha or white, or even stone. They come in different forms, but all symbolize the same thing and can be found as you are entering the shrine.

Of course, books have been written about this subject because there is such a rich and diverse history with every shrine, but you should now understand some basics of shrines.

Inari Shrines and Tori
The entrance to any Inari shrine is usually marked by one or more vermilion tori gate. Inari shrines typically have so many tori because businessmen who have been successful often donate a tori gate in offering and thanks.

Inari Shrines and Fox Statues
Inari shrines typically have two or more fox statues with them - specifically as in the image below taken at the Fushimi Inari-taisha shrine with a key in its mouth. This key symbolizes the key to a grain storage, or in other words both agriculture and wealth. Foxes are either seen as her messengers or she is sometimes even depicted as a fox herself. Inari's white foxes are thought to dispel evil and protect people and the shrines the statues are placed at.

There are a lot of smaller shrines around the main Inari-taisha which can be reached through following some of the tori gate paths, not all of them to Inari. In fact, Inari is not the only kami at the main shrine - it is built on five pillars so to speak, Inari and a group of kami that fit specific traits under her such as "sales ability" and "grain". If you go there yourself, have fun exploring and see what you can find!

The Fushimi Inari-taisha Shrine: Past, Present, and Future

The shrine was founded in 711 and in the Heian period (794 to 1185) it came under patronage of the emperor. Though the earliest structures were made in 711, a monk requested that it be moved in 816. In 1494 the main hall had to be rebuilt as it was destroyed in the Onin war (1467–1477) and the later occurring warring states period between the feudal lords. From 1871 to 1946 it was put in the first rank of government supported shrines which was a very important place..

Today the shrines get funded by a lot of the visitors who support the shrine by buying offerings such as those seen in the videos (the tori gates being left around the shrines), and private donations as offerings of thanks to Inari.

If you want to go to the Fushimi Inari-taisha Shrine there are many easy ways to get there, so if you ever get the chance to go to Japan you should visit Kyoto and this shrine. The past is easily erased and difficult to replace, so patronage to our historical sites is important no matter where they are. Look around you and try to find historical sites to visit. They usually have some kind of ticket system or gift shop that helps maintain the area so you not only have a wonderful experience but are also helping the world to be a better place. Have fun traveling!

Would you want to go to the Fushimi Inari-taisha Shrine now?