The Ghosts Of Las Vegas ~

Yes, there are areas in Las Vegas that are VERY "haunted"...

I have heard a lot of ghost stories recently about the "ghosts of Las Vegas" perhaps because of Halloween coming up soon... I thought, why in the world would there be ghosts here... of all places?

There are some very good reasons for ghosts here, so much of the area's history is tied to things like the mob, and tragedies that occurred here, as well as famous entertainers who, it appears, are just not ready to get off the stage yet... and so, here are some tales of the "ghosts of Las Vegas."

If you take a trip past the end of the strip, and make a turn to Paradise Road, just a block or so from the strip, you'll come to the Las Vegas Hilton. This is where Elvis used to perform in the theater there, and where even today, some say they still see his ghost. Seems he is not ready yet to "leave the building."

Sightings of the ghost of Elvis have been reported mostly by stagehands or performers, since his "spirit" seems to like hanging out near the theater. Some have seen him backstage, some in the theater while they are practicing. Wayne Newton even talked in his autobiography about seeing the ghost of Elvis.

Other sightings in the hotel have been at the penthouse suite, where Elvis spent a lot of time, as well as a freight elevator that Elvis would sometimes use to prevent being "mobbed" by fans on the way down. There have even been reported sightings in the basement below the theater.

Now, they say that this ghost is friendly, and sometimes will move tools around just to let people know he is there. I wonder if he'd sing a verse of "Love Me Tender" if you asked him? Just a thought!

Now if you go a little further right at the end of the strip is the "Stratosphere"... people will sometimes report ghost sightings there due to the people who have ended their lives by jumping... and there are reports of strange "cold spots" as well.

And down the strip a bit is "The Flamingo" hotel, where people have spotted the ghost of Bugsy Siegel. The building of the hotel was his idea after all, and it seems he is not ready to leave it behind. Back when he was there, he was protected by security everywhere he went. However, he went to California one weekend to visit a friend, and ended up being killed there by the mob. There is a plaque at the Flamingo Hotel in remembrance of Bugsy Siegel.

Along those same lines, in some of the downtown casino's, people have reported seeing "ghosts" of girls that are dressed like they would have been in the 1920s or 1930s, "flapper" type girls that stand and watch people while they are gambling. These girls were young girls, who were just beginning (like baby birds) to get their wings... hence the name "flapper." They were just leaving "the nest" and were drinking, smoking, gambling, and behaving quite differently than most of the girls of that generation. One visitor even reported that he was winning up until he saw the ghost of this "flapper" girl... then he began to lose.

If you go just a little farther down the strip, you will see what is now "Bally's" hotel. But, back on November 21, 1980, this very spot was where the MGM Grand Hotel was located, and where a terrible fire occurred which tragically took the lives of 85 people staying there. The fire spread at an amazing pace, and was started by a food display cabinet in the deli of the hotel. It was found that vibrations from the cabinet rubbed wires, which set off the fire, and it spread rapidly. Most of the people died from smoke inhalation, while one person jumped from a high story to escape the fire and fell to their death. This still remains the worst disaster in Nevada history.

People report sightings of ghosts and spirits at this location, due to the tragic nature of the deaths there. There are reporting's of "orbs" and "cold spots" and other things that are unexplained. A lot of the hotel maids will report unusual happenings as well. This tower, where 85 people died, is still open and being used today after being repaired, and the entire building was sold to Bally's. Another tower was built in 1981, and was never affected by the fire (built after the fire occurred). But it is in the original tower that there are sightings and paranormal activity.

Not too far from the strip, in downtown Las Vegas, there have been reported "cold spots" and voices of young children heard at a school called the "Las Vegas Academy." And in a school located in Henderson, Nevada, called Treem Elementary, janitorial staff report hearing a little girl crying... one janitor even said that he wears headphones now so he doesn't hear it.

There is a street corner, located at Flamingo and Koval, that is reported to be haunted by the ghost of Tupac Shakur. He was a rap artist, who was stopped at a stoplight on that corner in a BMW, and the car he was in was riddled by bullets, and he was killed. This happened in September of 1996.

In another location, a "Carluccio's" Italian restaurant was said to be "haunted" by the ghost of Liberace. This restaurant, located at the corner of Tropicana and Spencer, was located next to what used to be the "Liberace Museum" (now closed). I have recently heard that this restaurant is closed as well, and a new one is being built at a different location, expected to open in the Fall.

This restaurant was designed and named by Liberace, and was a favorite "hang out" of his, and by looking at the way it was decorated, with a lot of sparkling lights and a huge piano, you could see the "touches" of Liberace there.

In a home on Eastern Avenue, that is now home to "Shannon Day Realty," the ghost of the previous owner, Redd Foxx is said to visit from time to time. He starred as the older man in a television show called "Sanford and Son." Strange things happen here, like when they are typing on their computer keyboard, the "font" will suddenly turn red through no action of the person typing... it is said that the ghost of Redd Foxx is making himself known. They have put little "red foxes" on signs, hoping to "appease" him, but he is still said to haunt that location from time to time.

And even parks here in the Las Vegas area are not exempt from ghostly happenings. In one park, called "Fox Ridge Park" in Henderson Nevada, it seems that a young boy likes to swing late at night, numerous sightings of him have been reported. And it is reported that if you look directly into his eyes, they become "demon like" and glow. It is believed to be the spirit of a young boy who was hit and killed by a drunk driver on the road near the park. One person said that he had been drinking one night when he saw the spirit of the boy, and got the impression that the young boy hated "drunks" because of being killed by one...he became a witness that night to the "glowing eyes."

In a park called "Green Valley Park," there are also reportedly people who hear cries of children, and strange "orbs" and lights, and there even exists a picture of two little "feet" that as you look up, the "body" has disappeared into a haze....the picture was taken near a picnic table there.

Perhaps these spirits whose lives ended in such a tragic and sudden way are simply "restless" and not ready to accept that their lives have ended... or maybe they enjoyed the time that they were here in Las Vegas so much that they've decided not to leave just yet. Whatever the reason, Las Vegas continues to have a "haunted" history, and that legacy will go on for years to come, I'm sure. 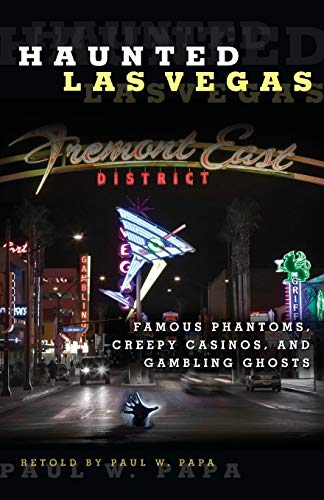