Kataragama is the only place in the world where people of all religions and all races come to venerate one god. This god is called God Kataragama, or Skanda. Buddhists of Sri Lanka believe that a provincial king named 'Mahasena' happened to meet Lord Buddha at this place.

Lord Buddha visited Sri Lanka thrice, and in his third and final visit occured in 580 BC he met King Mahasena at Kataragama, in the royal garden of the king and preached him Dhamma, afterwards which the king attained a higher faculty of mind called 'Sövan'. To commemorate this incident King Mahasena built a stupa at the very spot where he listened to Dhamma from Lord Buddha. This huge stupa is called 'Kiri Vehera' today. After the death of King Mahasena, it is believed that he has reincarnated as God Kataragama and staying as the guardian deity of this holy city. 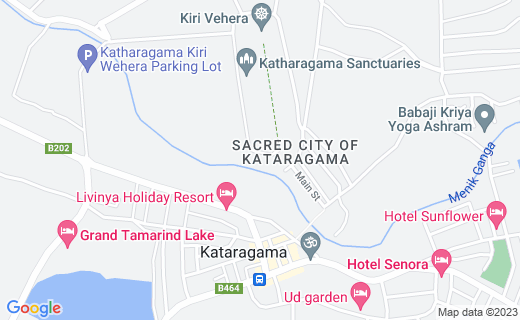 The Shrine in the Forest

In the early 19th century Kataragama holy city was hidden in the jungle. Even then, people from all corners of Sri Lanka and from South of India came to venerate and receive the blessings of God Kataragama or God Skanda as the Hindus believe, facing greatest difficulties. River Menik flows by the side of the Great Devale (abode of God Kataragama). The banks of the river is shaded by huge trees even today. Elephants bathing in the river are a common scene around here.

People bring offertories to God Kataragama. They are nicely arranged trays of fruits and coconut. As they enter the compound of the shrine, there is an age-old slab of granite with small metal fence around it. On one side of the fence the weapon of God Kataragama, that is the lance, is fixed. People come to this granite slab to pray for prosperity and smash their coconuts in it.

When their trays of fruit are offered to the Maha Devale, they will receive half of the fruits back with the blessings of God Kataragama. The devotees are supposed to eat those fruits received from the god for the blessing to be completed.

When I visited Kataragama recently, I saw this very pleasing scene of a devotee who had received his blessed portion of fruits from the Maha Devale sharing it with some monkeys.

The Sacred Bodhi Tree is situated right behind the Devale of God Kataragama. This Bodhi Tree was planted here in 307 BC, during the reign of King Devanampiya Tissa (307-267 BC). It is sacred to the Buddhists because it is one of the first eight plants that sprang from the Maha Bodhi sapling which was brought to Sri Lanka from Buddha Gaya, India, during Emperor Asoka's time. It is a direct descendant of the first Maha Bodhi under which Lord Buddha attained enlightenment 2500 years ago.

When walking further down passing the sacred bodhi tree, there is a road which leads to the huge stupa, On a side of this road there are flower sellers who sell lotuses, incense sticks, and other goods needed to worship Lord Buddha near Kiri Vehera.

Kiri Vehera stupa as it appears today, was built in the 1st century BC. Archaeological evidence for this has been found in the old brick structures standing behind the present Kiri Vehera. Ancient bricks with engraved Brahmi scripts has been found from this area.

People who visit Kataragama have fun feeding fish in River Menik. River Menik is teaming with fish because fishing is not done in this holy site. There are villagers who sell plates of popcorn to those who wish to feed the fish. Feeding fish is really fun. when you take a handful of popcorn the fish can feel it. When you throw it to the river they jump to get them! Those fish are feeding machines. However much popcorn you throw on them, they will vanish them in seconds.