Before the Paris attacks, we spent three splendid weeks in Europe. It all feels like a dream, but it did happen. With my deepest sympathy to those who are currently suffering, I would like to make a record of where we traveled and my impressions before I forget.

Our main reason for going to Italy was to be with our son and his family for his promotion in his vocation. We were so happy for this opportunity to be with them, and since we had not traveled there before, it was even more exciting.

It was intriguing to us that we could travel to four countries in four days, by car, bus and train. This miraculous feat included Italy, Austria, Germany and the Vatican. We only had so much time when our son could travel with us.

Exploring Italy would take years, but the parts we visited were mesmerizing. In the small town where we stayed, even the birds were very impressive.They were plentiful and sang beautiful melodies I was not familiar with. The bells in nearby churches were rung every hour. When it was time for prayer, they were rung for a lengthened time. I tried to count to see how many tolls, but they were never the same.

Have you been to Italy?

Mountains in all their majesty formed the backdrop for this lazy little town in Northern Italy. No need to rush here. Old men visited on the street corners. Markets opened around 9 and closed at 1:00 so the workers could take a nap. Then they would reopen around 3:00 and closed when the sun set.

Several restaurants offered Italian favorites, with some of my favorites, ravioli, tortellini, pizza and much more. All the food was hand made, so we were prepared to wait a while and visit as is customary in Italy. It was definitely worth the wait. I especially enjoyed the pumpkin soup and artichoke pizza.

A tiny local shop boasted yummy gelato. My first choice was tiramisu, then pistachio, hazelnut and pumpkin. It was made daily and served with pride. The owner was very accommodating to our boisterous group.

During our time in Italy, I became addicted to their croissants. Hence, I gained a bit of weight, but not to worry, as I returned to my regular diet when I returned home. We also feasted on lasagna, omelettes, spaghetti and bread sticks (not like the logs we were used to) dipped in olive oil and vinegar.

Very narrow roads wound through small towns. At times you had to pull over to let the other car advance. Buildings were built nearly touching the roads, so you had to be very alert while driving. I was surprised at how well the roads were kept, even though some were minuscule. There was no garbage on the side of the road. Eventually I discovered that most of the roads have a toll gate, so every so often you would have to stop and pay a toll for using it.

Italy was covered with rows of grape vines, even in the smallest of lots. Also, olive trees were plentiful. As a windbreaker, taller trees were planted in rows and became part of the splendid scenery. Rarely did we see a flat terrain. Hills and dales with occasional rivers and mountains made up the geography. Plentiful sheep and cows dotted the land.

As we made our way towards the middle of Italy, our son educated us on some of the customs, traditions and regional differences. Italy is considered in the top ten world economies, yet it still stays true to its agricultural heritage.

Not only does it include snowy peaks of the Alps, and small islands in the Mediterranean, but each region has a distinct dialect. World renown brands are recognized throughout the world, including Fiat, Armani, Pirelli, Olivetti among others. Italy is a fairly young country, becoming a unified nation in 1861. Prior to that it has been split between warring countries who attempted to dominate it. The Roman Empire claimed Italy in the 2nd century B.C. and is a big influence still today. Before that, the First Greek colonists reached Italy followed by the rise of the Etruscans.

Christianity was a big influence in Italy, with popes and emperors fighting over who should be in charge for five long centuries. 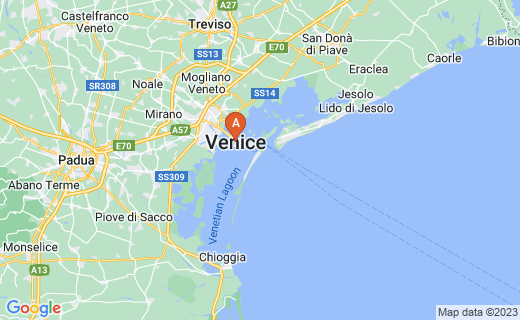 The first weekend we were in Italy, we traveled by car to Venice. No cars are allowed on the land, so we parked our car and walked for miles. With our son leading the way, we attempted to keep up. He had made me buy “appropriate” walking shoes before we left, and I was truly grateful for them and the steroid shot I had in my knee before we left the states.

The evening we had in Venice was truly magical. There was a full moon and the water was like glass. Only ripples from the gondolas and water taxis were evident. It was our wedding anniversary and my son wanted to make it special for us. What more could we ask for? We had a ride on a gondola with our four grandchildren as our son and his wife waited on shore.

Ancient homes flanked the canals, in a variety of colors and shapes. It made for a photographers dream. I attempted to get pictures of the buildings and in particular the people of Italy. Couples embracing, people walking their dogs, an old man reading his paper on his veranda, and too many more to count. Every one we met was pleasant and accommodating.

The lights had just come on and reflected in the water as did the houses and businesses. Afterwards, our son took us to a little restaurant with tables adjacent to the canal. I dined on tortellini and salad. It was delicious. A little old man came with roses and tried to sell them to my husband, as if he somehow knew it was our anniversary. I accepted one red rose as the owner of the restaurant chased away the vendor. We all returned home full of memories that would last a lifetime.

I will continue our journeys in upcoming articles. Stay tuned.