The Best Bar In Brussels

When we sought out the Mannekin Pis statue, we did not know which bar to go to afterwards for what had become the standard evening meal on our Belgian beer tour.

For those of you who have never sampled the delights of a winter holiday in Brussels, the standard evening meal involves several high-alcohol wheat and trappist beers washed down with a plate of cubed cheese.

An alternative is to keep the carbohydrate count up by consuming a Belgian waffle loaded with cream and strawberries. The Mannekin Pis area is waffle town, and there are many shops offering loaded delights for 1€, as opposed to the 3€ you'll pay at Grand Place.

I'm serious. You have to watch the calories. We bypassed the waffles as far as calorie choices went for It wasn't beer that was going to be sacrificed on our trip.

The first Mannekin Pis bar we tried to enter represented a scene straight out of the 'Allo 'Allo series. There were men in military uniform, wenches sitting on their laps, voracious singing and as my boyfriend opened the door to the bar, someone flew mosh-pit style across the happy crowd and clinking jars of beer.

The dimly lit Poechenellekelder Bar attracted us to it because it was quieter-looking - not that we are boring - I just did not fancy myself being swung from the rafters by exuberant Belgian Army soldiers. There is a time and a place for that.

It looked empty from the outside, with the ludicrously large candy canes atop a dank and stained sign. The outdoor area looked clean, but deserted, and by this time we were hungry and in need of refreshment, so we convinced ourselves to have a look inside.

We were astonished to discover as we rounded the top of the staircase entrance that the place was rammed. Stylish folk. No crowd surfers. Check.

Mannekin Pis - A boy having a ?

We managed to get the last table and sat down to peel off our winter coats, hats and gloves. The waiter took our order immediately, and as I hit the seat the beer arrived. My immediate impression was that while this bar is next door to a somewhat odd tourist attraction, it was anything but.

It felt really Belgian. The interior resembling a dusty house decorated like your Grandma would do it. My eyes kept drifting upwards to the weird adornments everywhere. A life size Father Christmas sat at the table next to us with two girls. It was only after a while we noticed he hadn't moved for ages, and was a dummy.

There are hundreds of photographs of the Mannekin Pis statue on every surface. The small water fountain is dressed in costume several times a year. Anyone who wants to make a costume, which must not have any corporate advertising on it, is welcome to submit this to the Mayor, who will then conduct a dressing ceremony.

The Manneken Pis Statue - Adoration of a Small Bronze Boy

The Mannekin Pis is a small bronze statue placed in 1619 in Brussels to perform as a city drinking fountain and has become a revered cultural icon of Brussels.

Several legends surround the reason artist Jerome Hieronimus Duquesnoy the Elder created the statue.The most cited is that during the Wars of Grimbergen, 1141 - 1159, Duke Godfrey II, County of Leuven, died in battle in 1142. This left his infant heir, Godfrey III to fight for the territory of Antwerp, Belgium.

The soldiers placed the baby duke-heir in a basket and hung him on a tree to inspire their troops against the Brabantinians. Legend has it the young heir peed upon the charging enemies, which turned the battle, causing the invaders to flee in cowardice. Years later, Duke Godfrey III, aged 17, led a fierce battle which ended the war in 1159, earning him a warrior reputation.

The Mannekin Pis statue is said to be modelled on this legend. Sculptured in the style of Ruben's cherubic figures, perhaps to indicate the people placed a miraculous assignation upon the battle of 1142. After all, it was a miracle that the young Duke was not killed at that time.

Due to multiple thefts over the centuries by groups of men wishing to capture this symbol of masculinity, the Mannekin Pis statue (while available for public viewing), is only a replica, and the original is within the Grand Place town hall, under the mayor's protection.

Occasionally, instead of water being spurted through the fountain's opening, beer will be piped through to the ecstatic cheers of gathered Belgians, who queue for a free pint from the statue.

Back To The Cheese and Beer

Thoroughly charmed by the legend of Mannekin Pis, we decide we have interrogated the Poechenellekelder staff enough, and go back to studying the menus. The beer menu is covered with choices from trappist, the rarer lambic, to brewery favourites from all over Belgium, with several good Antwerp brews from De Koninck, the town's main brewery. As Antwerp is the territory defended by Duke Godfrey, we order two varieties of pale ale.

Poechenellekelder means "Mannequin Cellar" and as you walk downstairs to the lower inner level there is a staged area where many Mannekin Pis dolls are photographed in costumes from the 20th century. From the rafters above you, large dolls bang your shoulders dressed in a range of outfits from nun costumes to military uniforms. You feel like you are in some kind of crazy toy shop that serves great beer. We laugh.

This bar sells a good cheese plate, and if you get this right in Belgium, it consists of a lovely selection of local cheeses, with saussicon, cornichons and cocktail onions, crusty bread, all on a sharing platter. We end up satisfying ourselves with several quality beers, two platters of cheese and pleasant conversation in this excellent bar.

The Poechenellekelder Bar received three visits from us during our beer tour of Belgium and Brussels, as we felt it had the 'it' factor.

Have You Been To Brussels on Holiday? 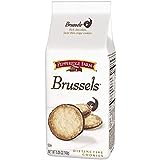