What Is Motor City Comic Con?

Amanda has lived her whole life in southeastern Michigan. She loves writing about the fun these little towns and cities have to offer!

Almost everyone has heard of the massive fan event that is the San Diego Comic-Con. But did you know states all across the country host their own comic and pop culture conventions too? In Michigan alone there are a plethora of these multi-day fests dedicated to celebrating geek pride and feeding all your nerdy loves through guests, shopping, and entertainment. But the biggest (whether it's best is up to you!) pop culture convention in Michigan has to be Motor City Comic Con.

Yes, since 1989 when established by the CEO of Motor City Comics aka Michael Goldman, Motor City Comic Con has brought unique entertainment and family fun to the southeastern Michigan area. Though it's worth nothing that dealers, artists, celebrities, and even regular attendees come from not only all over Michigan, but the rest of the country as well. In 2017, attendance was estimated at around 55,000! This is up 15,000 from 2014, the year of Motor City Comic Con's 25th anniversary.

Just like at San Diego Comic-Con International, the Motor City Comic Con offers informative panels on all things comic and pop culture, a chance to meet with beloved comic artists and writers, get autographs and photos with celebrities, an Artist Alley where you can purchase prints and originals of fan art for your favorite fictional worlds, and a huge dealer's floor to help you find that prized piece for your collection - or start a new collection!

Come early and prepare yourself for a long line - all the while remembering it will be worth it. That's just how popular Motor City Comic Con is! Even getting into the parking lot can be a bear. The Powers That Be, aka the people who produce and run the convention, steadily work to ensure a smoother experience with shorter admission lines, but there will always be a crowd and with a crowd comes a wait. Being May, it can get a little warm out there in the sun. Wear sunblock and forego layers unless they're a part of your costume.

Once you're inside, you're hit with the energy of thousands of fans swarming together across territory that is exclusively meant for them. Boxes full of comics line tables, art hangs from walls, the giant T-shirt tower 'towers' over everything, and action figures are everywhere. There's a little something for everyone.

Then there are the toys. New and recently released Walmart exclusives, vintage Star Trek ships mint in box, bins of $1 plushies, $300 Sideshow sculptures, and so much more all mixed together. If it's science fiction themed, chances are you'll find it when you go to a con.

When you've had your fill of purchasing and browsing the many collectibles to be found at MCCC, head on over to Artist Alley. Much more than an "alley" this section of the con takes up a good fourth of the floor. You'll find small name and occasionally big name comic artists and writers, ready to sign your books - usually for free! They'll also have issues and prints of their work available for purchase. Individual artists who are just there because they're creative but as-of-yet unpublished are not to be passed up at all either. Every year I swear I'll look for just one special print for a favorite fandom and I come home laden down with five to ten! The art quality is just that good.

On the right hand side of the Motor City Comic Con's floor is where you'll find all the "special" guests, aka the media stars. Stand in line for an autograph (which unlike the comic artists'/writers' signature will cost you a pretty penny), get your photo taken with the star (more money), and maybe even get a hug (priceless)!

Don't pass up the panels, if you have the time. These fan-interactive talks with some of the attending celebrities are generally included with your admission cost. Just make sure you arrive at the right room early enough to get a good seat! You may not get the kind of insider scoop you would at San Diego Comic-Con, but the experience will still be enjoyable and informative.

Like at any pop convention, cosplayers roam the floor everywhere you look. Some do it for fun or even to give others joy, while some people enjoy the extra motivation that is offered by Motor City Comic Con's costume contest. There is one contest for ages twelve and under, and one for ages thirteen and up. And yes, cash prizes are involved!

Even if wearing a costume of your favorite character and putting yourself on display isn't for you, you're still welcome to watch the contests - which can be a blast, particularly when people truly get into the "play" part of cosplay, doing their best impression of the character they've come dressed as.

Offering further fun at Motor City Comic Con are events such as movie screenings, gaming tournaments, "learn-to-play demos" for Dungeons and Dragons as well as other board games - and don't forget that Sunday is also known as Kids' Day! This doesn't mean that the excitement stops for adults, but that any kids 12 and under will be admitted into the con for free with a paid adult.

Like other 'comic' conventions, the big draw for attendees nowadays tends to be the television and movie stars that the con manages to schedule for the show. While you might find an occasional 'mainstream' actor or the ever-present wrestler, most Motor City Comic Con guests will be recognizable sci-fi and fantasy stars.

The infamous 2013 Motor City Comic Con's overwhelming crowds and traffic were largely in part due to the Saturday and Sunday appearance of Norman Reedus as a media guest (as well as Stan Lee's attendance, mentioned below), drawing in thousands of fans of The Boondock Saints and/or The Walking Dead. The line for a few truly delightful seconds that ended in an autograph from Reedus lasted a minimum of two hours for most attendees.

Now, all this isn't to say that the "comic" has been completely taken out of "Comic Con." Among all the vendors selling fanart and handmade creations in Artist Alley, you'll also run into table after table of local, national, and international comic book artists, writers, and creators. Perhaps the biggest name to this date that Motor City Comic Con has featured is the ultimate in comic names: Stan Lee himself (in 2013).

Of course these are just several of the notable names dropped at MC3 over the years. Each year features tens upon tens of media and comic guests.

How Much Does It Cost?

With popularity comes an increase in cost to us, the fans - unfortunate but understandable. Motor City Comic Con's entry prices have gone up with the years. While back in 1990 it's said that you could enter the con for as little as $4 a day or $7 for the whole weekend, things are a bit bigger and different now. Today, tickets range from a low $10.00 for a child to enter for one day, $40.00 for an adult on Saturday (Sunday and Friday pricing is slightly cheaper), or $75.00 for adult 3-day admission.

There is a small fee for parking, but you'll find it to be considerably less than in a big city.

Please Note: While I do try to update the information in this article from year to year, I am in no way affiliated with Motor City Comic Con and their prices are their own to change at any time. Always check their official website (linked below) for accurate, up-to-date information about the year's convention. 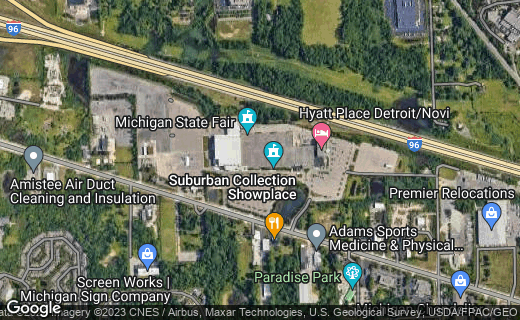 Where and When Is It?

Motor City Comic Con was originally held in the Dearborn Civic Center way back in 1989. Nowadays, since 2005, the convention resides in the Suburban Collection Showplace.

It's typical date runs somewhere in mid to late May. The 2018 Motor City Comic Con will be held from May 18th through the 20th (Friday through Sunday).

Opening and closing times for MC3 are consistent from year to year (though I doubt anyone would complain were they to lengthen them!). On Friday the show's official start time is 12:30, running until 7:00 PM. Saturday is 10:30 to 7:00. Sunday is also a 10:30 opening, but the doors sadly close at 5:00 PM until next year. As is often true of comic cons, the doors open a half hour early for anyone with advance tickets.

Have you ever attended the Motor City Comic Con?