Thailand's northern city of Chiang Mai has many shopping areas throughout the city. The best known to tourists is the Night Bazaar, mainly because it's featured in every guide book about Thailand sold worldwide. It's actually composed of two independent Bazaars across the road from each other: Chiang Mai Night Bazaar and Kalare Night Bazaar, but it's always considered singly as 'The Night Bazaar". It's very much a tourist venue with tourist prices, and the only Thais you're likely to see here are those who work at the Night Bazaar.

There's a huge range of items for sale including gold, jewellery, art, leather goods, ornaments, traditional Thai handicrafts, silk ties and shirts, small hand-crafted furniture items and much more. Most things are pricier than at other marketplaces, although the range of items available at the Night Bazaar is far greater with more emphasis on luxury items. It's certainly not a flea market.

In any case, most things are still considerably cheaper than in any Western country. Unfortunately, that doesn't apply to gold, which is as expensive here as anywhere. It does apply to quality goods such as bags and suitcases, though.

The Night Bazaar shopping areas are geared up for the tourist trade. There are countless items on sale that instantly appeal to visitors looking for souvenirs and gifts to take home. Many buyers see items they want to buy, but having to carry them home puts them off, especially if they've only just begun their trip to Thailand and have a lot more places to visit. Carrying around items that are large or fragile is an inconvenience they'd rather do without.

So the traders offer a paid postal service. For an additional postal fee, they can mail anything you buy to your home address. It's very convenient, and there's no need to worry about them keeping your money and not sending the item. It's a very lucrative trade, and the last thing the Night Bazaar management would tolerate is a dishonest trader ruining the Night Bazaars reputation.

Quite a lot of floor space in Chiang Mai Night Bazaar is given over to portrait artists. Their portrait drawing style is mostly black and white brushed carbon portraits, which have a very realistic, almost photographic look. Portraits are painstakingly copied from photographs supplied by customers and each order takes a few days. Like most of the other traders at the Night Bazaar, they offer a paid postal service and will mail the unframed portrait adequately protected in a sturdy cardboard tube to any address worldwide. Other media offered include pastel and oil portraits.

Kalare Night Bazaar is more developed than the Chiang Mai Night Bazaar as it has food halls, a beer garden and quite a few snack booths.

Stalls on the street

There's a long line of stalls on the street outside both bazaars stretching for hundreds of metres. They're not part of the Night Bazaar, but independent street stalls with a huge range of items. They're often cheaper than the Night Bazaar, but because it's a prime spot, most items are still more expensive than at normal, non-tourist, markets, And unlike the Night Bazaar shops, most won't offer a postal service.

Getting to the Night Bazaar

The Night Bazaar is located in Chang Klan Rd., a very central area situated between two of Chiang Mai's most popular streets: Loi Kroh Rd., where all the bars and street massage stations are, and Tha Phae Rd with its many international restaurants. It's the area where all the big hotels are like the Meridian Hotel, Imperial Mae Ping Hotel and Royal Lanna Hotel. If you're staying in this area, then it's just a short walk to the Night Bazaar as the map below shows. If you're outside of the area, just take a 3-wheeled tuk-tuk taxi or red songthaew shared taxi for a few dollars. 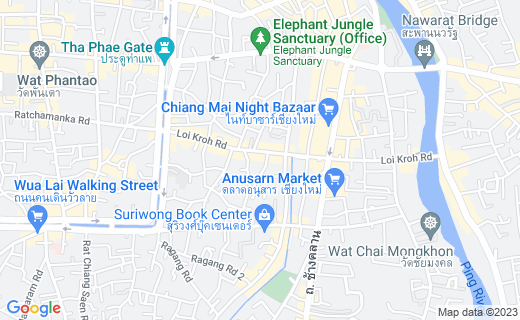 Both Night Bazaars can get very busy in the high tourist season (Nov-Feb), especially at weekends in the late evening. Midweek and early evening during the low season (March-October) is the quietest time. Most of the photos in this Hub were taken in the current low season, midweek and quite early in the evening. so you can see how it's not exactly bustling. This is a good time to haggle as business is relatively slow for the sellers and they might be more inclined to offer better discounts in order to make a sale.