To walk the pilgrim route of St Jacques, or Saint James, of Santiago de Compostelle, has been one of my ambitions for many years. I'd love to spend a vacation following one of the many famous long distance walks through France and Spain, so you can imagine how pleased I was to discover that one of the strands of the Way of Saint James of Santiago de Compostela, (or, in French, the Pilgrim route of St Jacques de Compostelle), passes by Les Trois Chenes, our Bed and Breakfast in Videix, Limousin, France.

Just fifteen minutes from our farmhouse you will find the Church of Saint Eutrope, standing magnificently on the edge of the pretty village of Les Salles Lavauguyon. This church is one of the stopping points for the pilgrims on their way to Spain.

The route is marked with the symbol of Saint Jacques, the Scallop shell and this symbolhas been beautifully inlaid into the seats of the chairs inside the church of Saint-Eutrope. (See illustrations below.) In Limoges, if you look carefully, you will find small metal shells set in the pavements and as you follow the route you'll spot the sign on walls, buildings and artifacts. Keep your eyes open.

Where is the Church of Saint-Eutrope?

The Church is situated in the village of Les Salles Lavauguyon in Limousin, South West France. It lies between the historic Cities of Angouleme, Limoges and Perigueux and is about half an hour from the medieval town of Rochechouart. You will find the church easily when you arrive as it is on the edge of this small village on the road to Maisonaise-sur-Tardoire.

Please note that all content and photographs (unless otherwise attributed) are copyright of B L Walton and must not be reused without written permission. 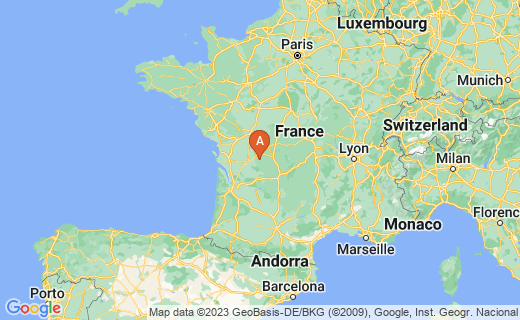 A Sense of Direction by Gideon Lewis-Kraus

At the priory of the Church of Saint Eutrope, LES SALLES LAVAUGUYON 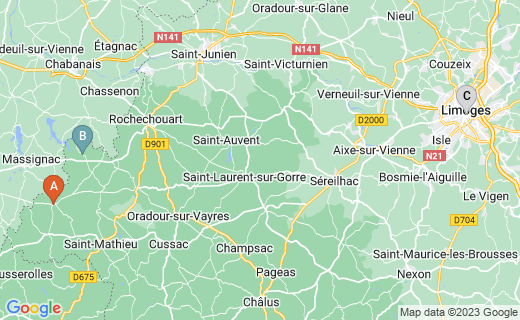 There is no precise route that can be marked on a map; it is the path taken from the home of the pilgrim to the ultimate destination of the Cathedral of Santiago de Compostela in Galicia in northwestern Spain, where it is traditionally believed that the remains of the apostle Saint James are buried. Over many centuries, however, certain routes and stopping points have become so well used that they can be considered the Way of St. James or El Camino de Santiago in Spanish, (in French it is called the Chemin de St-Jacques and in German Jakobsweg, all very confusing) and these footpaths are shown on the map below.

The Pilgrim Routes of Saint-Jacques

The Church of Saint Eutrope

One of these routes begins in Vézelay and then passes through Limoges and Les Salles where the pilgrims would visit the church of Saint Eutrope. The origins of the church lie in the Romanesque period of the late 11th and 12th centuries but only the barrel vault of the nave remains from this period now. The choir and the bell tower were rebuilt towards the end of the 12th century, however the choir retains the Romanesque style. Built on a slope, the building is remarkable for its steps which you climb from the entrance towards the altar (although the floor is relatively new).

The church, which is dedicated to Saint Eutrope, who was born in Persia/Iran and became bishop of Saintes at the end of the 3rd century

The building was designated a building of historic interest in 1907.

Uncovered by accident in 1986, the 850-year-old frescoes are considered to be some of the finest examples in France. The themes, scenes, high quality and richness of colour, make them unique to western Europe. The church of Les Salles Lavauguyon is amongst some of the worlds most important heritage sights.

Five panels covering approximately 80 square meters on the western interior facade, depict scenes from both the old and new testaments, which include the Creation, the Nativity, the vices and the brutal death of Saint-Eutrope. Other frescoes on the south and north walls continue the themes with dedications to male and female Saints and Priors. Also clearly visible are several small wall paintings in black depicting the coats of arms for the Lords of nearby Lavauguyon to commemorate theirs and family members' deaths between the 16th & 18th centuries.

The scallop shell is commonly found on the shores in Galicia and so has long since become the symbol of the Camino de Santiago. Although it perhaps began with pilgrims wishing to take a souvenir back to their places of origin, the shell has gathered symbolic meaning as well as rather practical use as cup, plate and proof of completion of the pilgrimage.

There are various accounts of the mythical origin of the symbol but here are two of the most common versions:

The first describes how, after James' death, his disciples shipped his body to the Iberian Peninsula to be buried in what is now Santiago, but a storm hit the ship, and the body was lost to the ocean. Eventually the body was washed ashore undamaged and covered in scallops.

The second version grows in its attempts to give the story more miraculous effect. After James' death his body was mysteriously transported by an unmanned ship back to the Iberian Peninsula to be buried in what is now Santiago. As the ship approached land, a wedding was taking place on the shore. The young bridegroom was on horseback, and on seeing the ship approaching, his horse got spooked, and the horse and rider plunged into the sea only to emerge from the water alive and covered in seashells.

The shape of the shell also adds metaphorical meaning. The pattern of the lines in the shell come together at a single point representing the various routes pilgrims traveled converging on the tomb of Saint James in Santiago de Compostela. The scallop shell is also a metaphor for the pilgrim. Thirdly the pilgrims are seen as arriving in Santiago in the same way as the waves of the ocean wash scallop shells up on the shores of Galicia.

The pilgrim's staff is a walking stick used by pilgrims to the shrine of Santiago de Compostela in Spain.Generally, the stick has a hook on it so that something may be hung from it. The walking stick sometimes has a crosspiece on it and it can be decorated with the shell. 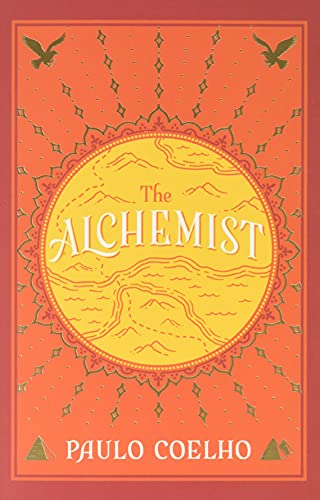 The Alchemist : A Fable About Following Your Dream
Buy Now

The Alchemist and a spiritual awakening

Paulo Coelho, author of the bestselling book, The Alchemist, told his story on Radio 4 in The Alchemist Himself. The year 1986 was a turning point in his life when Coelho walked the 500 mile Route of Santiago de Compostela in northwestern Spain. On the path, Coelho had a spiritual awakening and he describes this in his autobiographic book The Pilgrimage.

Could this route change your life?

The Alchemist maps out the journey of Santiago, an Andalusian shepherd boy who travels to see a gypsy in a nearby town to discover the meaning of a dream. She points him towards a quest to find treasure in the Pyramids in Egypt. The story is one of the people and events along the route.

Other books about the pilgrimage

Accommodation for Pilgrims of St. Jacques

In Spain and France you can find pilgrim's accommodation with beds in dormitories along the routes which offer accommodation provided you have a credencial, a sort of Pilgrim's Passeport which you can obtain for a few euros through a Spanish tourist agency or your local church.

In Spain this type of accommodation is called a refugio or albergue, both of which are similar to youth hostels or hostelries in the French system of gîtes d'étape. They usually cost between three and seven euros per night, but a few operate on voluntary donations and are known as donativos. Pilgrims are usually limited to one night's accommodation.

These hostels may be run by the local parish, the local council, private owners, or pilgrims' associations. Occasionally these refugios are located in monasteries, such as the one in Santiago de Compostela.

I have not been able to locate any of these near Les Salles however they may well exist and be easier to find once you start out on the routes. If not, you will have no difficulty finding self-catering cottages at very attractive rates or campsites and Bed and Breakfast. Chez Rambaud Campsite is situated at Les Salles. Our Bed and Breakfast and gite (self-catering holiday home), Les Trois Chenes, Videix, is just fifteen minutes away (see our web site www.lestroischenes.com or email us on +33 (0)5 55 48 29 84).

Claudia Roden came to the Woman’s Hour studio to talk about Spanish cooking, her career as a cook and food writer and her latest book ‘The Food of Spain’. She took the opportunity to demonstrate how to make the flourless almond cake, a traditional Passover recipe. Listen to the program, and find the recipe.

A healthy holiday that takes you through some of the most beautiful countryside in France and Spain, cultural, spiritual and, above all amicable. Following the Pilgrim route has all the ingredients for that perfect holiday.

Other places to see around Les Salles Lavauguyon

There are so many interesting things to see in this area that I will list only two of the most important historical sites: Rochechouart Chateau, now also a Centre for Contemporary Art, and Cassinomagus, a major Gallo-Roman site near Chassenon. Both less than half an hour from Less Salles, and ten minutes from Les Trois Chenes.

Think you could write for HubPages? Join us by clicking here.

The Church of Saint-Eutrope: Details

Access to the church at anytime during the day is free. There are guided visits in both French and English but these are subject to the availability of a guide at the time, or you can book in advance. Cost per adult is 2.50€. Children under 12 is 1.50€. Please note that when periods of restoration work are in progress, access and tours will be limited. To avoid disappointment please make inquiries with the Mairie before your visit. Mairie des Salles Lavauguyon – Le bourg – 87440 Les Salles Lavauguyon Tél : 05.55.00.30.68

Have a look at this charming children's book

The Road to Santiago
Buy Now

More information about the Pilgrim Routes