The Point San Luis Lighthouse: An Adventure in Time

The Point San Luis Lighthouse Station near Avila beach is in San Luis Obispo county and it has keepers again! Fully automated since 1974, the original Lighthouse went into service in 1890. The current Keepers are there to give tours, hikes, host weddings and special events.

On a beautiful Saturday afternoon in December, my wife and I visited this amazing living history museum and here's what we learned!

Before I start, allow me to say that I have been coming to the central coast since I was a little kid. I had no idea this was here or ever was. It was a complete mystery to me. Having found it and seeing it's breathtaking views and breathing in it's air, I am confident I will return often to this Victorian Time capsule on the coast. I wish all the success in the world to the Keepers!

The history of the Point San Luis Lighthouse

To travel through time, you need a time machine... or you just need to know where to look. A lighthouse at Point San Luis had been considered as far back as 1867. That was when then President Johnson had the Dept Of Interior look into the posibility of putting a lighthouse there. In the 1870's the local port of Harford was becoming ever more busy with upwards of 400 ships annually. So in 1877, Romualdo Pacheco introduces a bill for the construction of the lighthouse at Point San Luis, but it never took. It wasn't until 1886 that Congress gave the go ahead and the funding for the lighthouse.

Actual construction winds up getting delayed and in 1888 a ship called the Queen of the Pacific sank as a result of the dark night and losing their way. It was clear that having a lighthouse would have given the Queen what she needed to reach the pier and not the rocks she collided with. Fortunately, no lives were lost, but it was enough to get people motivated to start work.

Getting To The Lighthouse

There's a couple ways to get to the Lighthouse, but most people take the trolley. It is a short ride through a recently paved canyon road that boasts some spectacular views. The road is inside and on PG&E property and right by Diablo Canyon Power Plant, so if you want to go to the lighthouse, you need to be on the trolley or hiking with a guide. Unless you Kayak in, as it seems that's an option as well.

The road in will take you past Whaler's Island (see photo) Whalers Island which is now part of the break water was, in the 1800’s an active whaling station. Between November and April when the whales migrate, a lookout was stationed above the lighthouse. When a whale was sighted, men would row out to harpoon the whale, once caught, they would tow the whale back to the island for slaughter and strip the blubber. On the shore were 1500 gallon pots in which the blubber was then boiled down into oil. They only needed 10 whales to pay for a season. The Industrial Revolution relied heavily on whale oil. Petroleum hadn't really gained a foothold yet and so whale oil was used to lubricate the big machines of the Industrial Revolution.

According to the tour guide, a sea captian put a house on top of Whaler's Island but eventually it fell into the sea. Would have been cool to see a house up there. Might also have been pretty exciting to watch it go over the side too!

From Wikipedia: "By specification, the 4th Order Fresnel lens would generate alternate red and white flashes of light every 30 seconds that would be visible 17 nautical miles (31 km) out to sea. In 1969, the Fresnel lens was retired (it is currently on display at the Lighthouse) and replaced by an automated electric light."

On this trip to the lighthouse, Christmas was right around the corner. It was mid December and after the trolley brought us around we were greeted with Victorian Christmas Carolers. Inside there is a real Victorian feel. The kitchen is simple and immediately makes you yearn for a more simpler time. The parlor is warm and inviting. Walking into the parlor, seeing the fireplace, looking out the window left me to my imagination as I envisioned myself sitting in one of the arm chairs in the parlor, smoking a pipe and reading Melville on a bright sunny afternoon. No fog, all the chores are done, time to enjoy this miraculous view and read myself to ignition time.

There are bedrooms upstairs and a cellar. All meticulously restored to it's former glory. It is very much a time machine. What there isn't is a bathroom. That's right. If you gotta go, you're going outside, in the outhouse. No fun on a cold windy night, but hey, that's the cost of this beautiful view and serene setting. I'll take it. The outhouse isn't there anymore, but you can see where it was.

You can also take the stairs to the old light room where the Fresnel lens used to earn it's keep. The view from up there is fantastic and the life of a keeper while hard and lonely, clearly is also highly romantic. Who doesn't hear the call of the sea? We are all explorers and adventurers. Working a lighthouse 100 plus years ago seems so askew to our cyber existence today that you can't help but romanticize the daily life of a lighthouse keeper.

The ocean is your Spotify, save for the Victrola in the parlor. Your Google is the stack of books on the shelf. Social Media is actually sitting at the dinner table with your family (God forbid) and your kid's Xbox is a swing hanging from a giant Eucalyptus tree. 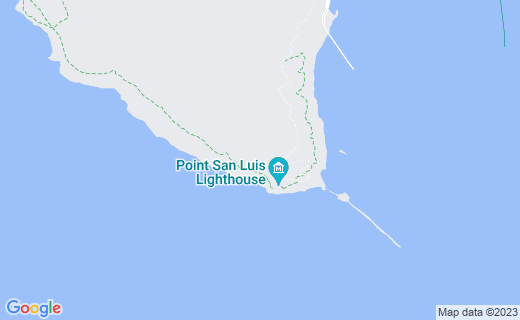 The point San Luis Lighthouse Keepers was established in 1995 to provide the leadership, talent and organization to restore and maintain the Light station. They are a 501c(3) not-for-profit corporation registered with the State of California and the Federal Government.

Donations to the Keepers are tax deductible to the extent allowed by the law. Their first goal was to stabilize the structure after 20 years of neglect. This was followed by an exacting restoration process for the exterior of the 100 year old redwood buildings. Refinishing and furnishing of the interiors of the lighthouse/head-keepers quarters was furnished in 2009, starting with the kitchen, parlor and sitting room.

The ultimate goal is to provide an educational and recreational resource which takes visitors back into the history of the Central Coast in the near early 20th century - a time of kerosene lanterns and travel by sea.

If you are interested in becoming a member of the San Luis Lighthouse Keepers, making a donation or volunteering with them, please contact them at 805-546-4904 or you can email them at info@sanluislighthouse.org

Find The Lighthouse On The Web