On a cold foggy morning I stood watch on a balcony at the Pacific Coast Club in Long Beach California.  The Pacific Coast Club is long gone but not forgotten she played host to me that morning waiting for the RMS Queen Mary to make her way to her final destination.  I was six years old and 42 years later I still remember her coming out of the fog, big, and majestic.  My Great Uncle had been on her when she was a troop ship, and another Uncle would work for the Queen Mary after her arrival in Long Beach.  I remember taking a harbor cruise with my Grandmother Jule and we went right up next to her as she was being cleaned, repainted and marveling at how small I felt next to her. Over the years I would go visit her and walk her decks wondering what it would have been like to sail on her, in her glory years.  The RMS Queen Mary has many stories and has been a part of history.

Cunard wanting to keep up with the White Star Line began construction on the ship, then known only as "Hull Number 534", began in December 1930 on the River Clyde in Scotland.  The work was being done by the John Brown and Company Shipbuilding Engineering at the shipyard in Clydebank Scotland.  A year later work halted due to the Great Depression and Cunard applied to the British Government for a loan to complete the work.  The loan was granted and work continued on 534 which at that time she was given a name and there was enough money to start work on Hull No. 552 which would become the RMS Queen Elizabeth.  Part of the loan agreement would be that Cunard and White Star line would merge and the merger was completed in April 1934.  The Queen Mary was launched on September 26, 1934.  To complete this project took over 3 years and cost 3.5 million pounds sterling.

The great ocean liner made an inaugural cruise from Southampton on May 14, 1936 and then made its maiden voyage, on the Southampton-Cherbourg-New York route, on May 27.  The Queen Mary would set speed records and her biggest competition at the time came from the Normandie.  These two ocean liners would swap back and forth on being the fastest.  On March 21, 1940 the Queen Mary left New York under orders to sail for Sydney where work began converting the ship into a troopship. The luxury furnishings were removed and tiers of bunks and hammocks were fitted.

During the war, the Queen Mary, carried British Prime Minister Winston Churchill across the Atlantic for meetings with fellow Allied forces officials.  During her years of service as a troop ship she carried over 16,000 troops at one time.  Her service to the war she travelled over 600,000 miles and carried nearly 800,000 people.  She was once hit by a rogue wave in 1942 that nearly capsized her.  From September 1946 to July 1947, Queen Mary was refitted for passenger service, adding air conditioning and upgrading her berth configuration.  It made its first sailing after this on 31 July 1947, from Southampton to New York.

After her great service Cunard in 1966 announces that she is up for sale and is later sold for $3.45 million to Long Beach, California.  In August of 1966 she made the fastest eastbound crossing 4 days, 10 hours, 6 minutes and the second fastest Atlantic crossing since 1938.  The RMS Queen Mary made her last transatlantic crossing on 16 September 1967.

On December 9, 1967 the Queen Mary arrives in Long Beach, California.  In December she is removed from the British registry and officially turned over to the city and becomes fully dependent on shore side utilities.  For a few months she sits in dry dock at the Long Beach Naval Shipyard.  On February 27, 1971 she is moved to Pier J where she resides to this day.  For a few years this area is known as Mary’s Gate Village but is now called “The Queen’s Marketplace”.

Today she is said to be haunted and there have been many stories about this.  She is a tourist attraction with a hotel, restaurants, museum, and tours.  The hotel has 314 original staterooms that span three decks and includes three suites.  The Queen Mary was done in the Art Deco style of decorations and furnishings.  The Queen Mary plays host to six restaurants ranging from seafood, champagne Sunday brunch, Cabaret style shows and a café to cover a few of what is offered.  There is a cost for parking but if you eat at one of the restaurants will save you $5 on your parking.

If you travel to this part of California, Long Beach is very close to Los Angeles and a stop at the Queen Mary is something that one must do at least once.  This beautiful ocean liner is of a time gone by and she is a true beauty from this era. 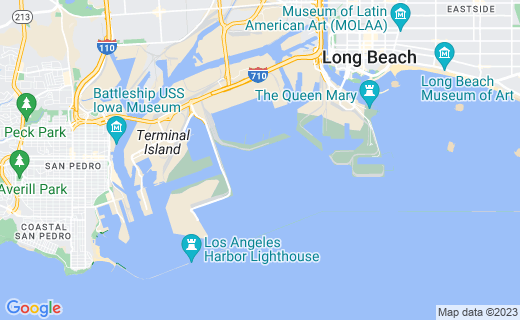