The Route of King Richard the Lion Heart

Rochechouart castle is on the route of Richard the Lion Heart

Limousin is a land of lakes and legends, of enchantement and mystery, of the wild and the free. Known as 'Hidden France' because, though beautiful and steeped in history, it is undiscovered and so, unspoilt. Here you can enjoy all the ambiance of France, the wine, the food and sunshine, but you can do it on empty country roads bordered with cowslips and the early purple orchids.

We have lived in Limousin, creating Les Trois Chenes Bed and Breakfast, for seven years now and have only begun to discover a fraction of the treasures of this region! I have only just realised that the nineteen Castles and ancient monuments on the Route of King Richard the Lionheart are all within an hour and a half drive from us, and 18 are within an hour.

The nearest castle to us is Rochechouart. Nor does this include the castles of the nearby Charente and Dordogne regions or several other amazing historical sites!

Who was King Richard?

Richard was born in Oxford, England on the 8th September 1157. He was the son of King Henry II, Plantagenet, King of England and Queen Eleanor of Aquitaine, France. He was invested as the Duke of Aquitaine in April 1169 in Poitiers, and this was confirmed in Saint Etienne Cathedral, Limoges.

Together with his brothers he went to war against his father. When his father died in 1189, Richard became Duke of Normandy and then King of England.

After crusades and turbulent skirmishes with the King of France, he was wounded on 26 March 1199 and died 6 April. His heart was buried at Rouen and his entrails at Châlus, Limousin. What was left of him was buried at Fontevraud Abbey.

What is the Route of Richard the Lion Heart?

This is a route created in 1984 to link together the amazing castles, churches and historical sites of the Region of Limousin and bordering departements. This link was Richard. All the sites existed at the end of the 12th century and some of these formed a fortified barrier to the south of the region.

A coat of arms was created - a crowned lion with an arrow through the heart - and this logo is used on a series of sign posts that clearly mark the route.

Visit castles and chateau in the Limousin

The Chateau of the Route de Richard Coeur de Lion

There are lots of other important near-by places to visit:

The chateau of La Rochefoucauld is a real fairy tale castle

The Chateau of La Rochefoucauld in the Charente is only thirty minutes drive away from Videix. Not only can you visit this castle, but you can dress up in costumes and swan around as if you owned the place! A definite winner for children.

The town is a pretty and virbrant centre with lots of wonderful cafés, restaurants and shops. The castle has been owned by the same family for its entire history, since 980, and if you are lucky, you may well be shown around by the proprietors themselves

How to find Les Trois Chenes Bed and Breakfast in Limousin 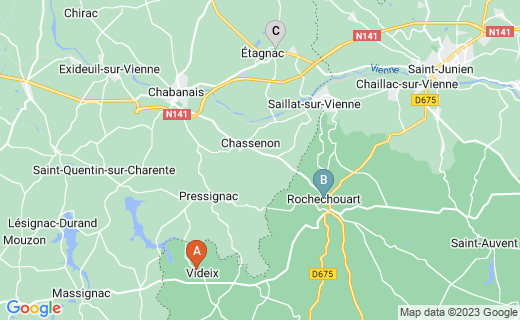 Les Trois Chenes is on the Route of Richard the Lion Heart, ten minutes from Rochechouart and twenty from the Chateau of Rochebrune

Other Sites of Interest

You and Richard the Lion Heart

Have you heard of the Route of Richard the Lion Heart?