Columbus Mayor Michael Coleman’s administration implemented massive revitalization and improvement of the Columbus cityscape in the 1990s and 2000s and continues into the 2010s.

The city assumed many abandoned houses and demolished them and partnered with theprivate sector to build formal Gateway Business, Entertainment, and Residential Complexes to replace these eyesore corners. City parks and recreation centers were also improved and neglected city properties replanted with native grasses, flowers, and trees to aid wildlife with natural habitats and the environment with sustainability.

One of two newest city park projects is of national importance.

The Whittier Peninsula is a portion of land jutting out into the Scioto River in Downtown Columbus at the south end of attractions along a large bend in the river. Until the 2000s, it was a neglected and overgrown site of homeless encampments. Today, a revitalized 80-acre greenspace and city park houses the nation’s first urban Audubon Center. There is a play area and a climbing wall that is higher than most and free to use (the public must supply ropes and gear). Boaters launch their vessels from the park’s boat ramp and public is permitted to fish from the ramp.

The land was completely cleared of broken parking lots, old warehouse buildings, trash, and overgrowth weeds and replanted with native plants and grasses. Natural habitats have spread and helped the wildlife of the region. In the process, the peninsula has become an ideal site for picnics, birding, and viewing special events like the Red, White, and Boom fireworks spectacular on July 2nd or 3rd annually. Another event is the artistic river presentation Water Fire. This nighttime performance is a concert of popular and classical music presented against the visual beauty of the lighting of cauldrons mounted in the river. The flames agasint the night and the music are entrancing. The increasing yearly viewing crowd has become a party on the river within the last 5 years, with concessions and other amenities available during the concert.

The Scioto River is under ongoing development from Whittier Park on the South to Spring Street and North Bank Park on the morth.

Moving northward from Whittier along the eastern riverbank, we have Bicentennial Park, Battelle Memorial Park and its Santa Museum Ship docked on the river, and North Bank picnic and recreational facility on Spring Street. On the opposite shore are the Center of Science and Industry (COSI), and a performance amphitheater. 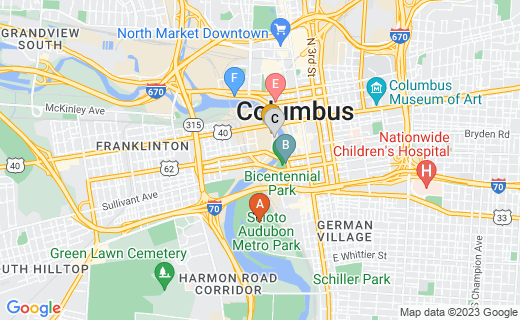 This is not a joke and we already know that many items and phenomena from science fiction become science fact.

The Santa Maria Experiment Exhibit is the first display in the country to center on successfully completed research in optical invisibility. The exhibit presents a combination of histories of two different eras and uses them to prove the scientific theory that objects may be made invisible optically through the bending of light. Interestingly, at the same time a NASA facility in Cleveland, Ohio is researching the ability to surpass the speed of light.

The Santa Maria Museum offers events and visitor's hours around the year, with a Haunted Halloween Ship event and an overnight program for youth that teaches them the hardships and survival possibilities inherent to a prolonged 15th Century sea voyage.

The former site of the Columbus Arts Festival, which moved to the Columbus Museum of Art District a few blocks to the east, the Scioto Riverfront is home to the Columbus Jazz Fest; Red, White and Boom; a Hispanic Festival; and First Night New Year’s Eve celebrations; with additional events added each year.

The owners of the historical Kahiki Supper Club planned to construct a new restaurant on the Riverfront, but ultimately abandoned their plans when they became too busy with their frozen food manufacturing and distribution business. However, the people of Columbus still hope for a Riverfront Kahiki Supper Club.

North Bank Park is located at 311 W. Spring Street on the Scioto River at the north end of the Downtown Riverfront and adjacent to the Nationwide Arena District and the Pen West District. Spring and Long Street run parallel at this point and the median in between has been incorporated into North Bank Park. The central building in the park is a large air-conditioned glass, steel, and brick pavilion used for special events and offered to the public for weddings and other special occasions.

This park also provides boat docking and and improved trails for walkers, bikers, and inline skaters along the river's edge. Summer brings a lot of people out with their canoes and skates. The trails connect directly to the Olentangy and Scioto Greenway Trails further north and to Battelle Park, Avenue of Flags, and Bicentennial Parks to the south.

The upper North Bank Park plaza includes a play area with an interactive fountain, a patio for tables and chairs, and an amphitheater-greenspace seating arrangement facing the river and the Columbus Skyline. Signage around the park tells the stories of Columbus history and the stone found on park walls comes directly from the old Ohio Penitentiary that stood to the north. This is a perfect spot for viewing any event scheduled for the Scioto Riverfront and the entire Riverfront Complex is a great vacation destination.