Northern New Jersey, specifically Sussex County, may not have the large cities and shopping centers to the east of the county, nor does it have the lure of the seaside to the south. What Northern NJ does have, however, is hidden gems of places that most people have never heard of. Many of these places are true gems, each unique and well worth a look. Exploring Northern New Jersey can be extraordinarily fun to explore for this reason alone, stopping into to these small places, only to be surprised at what they contain. Northern New Jersey is a place full of history, and plenty of that history bleeds through to today. One of the more prominent locations can be found in Ogdensburg. The Sterling Hill Mining Museum is a great place to visit on a weekend.

The Sterling Hill Zinc Mine was closed due to economic problems in 1986, and was purchased in 1988 by the Hauck families, who wanted to preserve the mine. In 1990, the mine was reopened as a museum to the public. Currently, it is the only place where you can tour a large underground mine, and one of the very few natural homes to Fluorescent Minerals, or minerals that glow under a black light. Soon after the purchase, the Thomas S. Warren Museum of Fluorescence was added to the museum, then, more recently, the Ellis Astronomical Observatory was added. All the buildings, barring the Observatory are original build from when the mine was in operation, between 1914-1930, then from 1954-1957. These buildings are a part of the public tour. Having all the building be original build makes it much easier to picture how the mine may have looked when it was still in operation. The mine itself runs well over a thousand feet below the surface. However, due to flooding, only the first thirty feet of the mine can be accessed.

One fascinating part of the tour, and one of the first stops, is the Zorbel Exhibit Hall. This hall was the former locker room for the miners. The original lockers can still be found in the hall, as can the showers. Here, you will find not only the original lockers, but many rock and crystal samples taken from the mine, the old mining equipment , and even fossils! They converted this old locker room into a large exhibit hall. There is enough packed into here, that each time I visit I find new and different things in the Exhibit hall. The tour guides tend to be very knowledgeable about everything in the Exhibit Hall, from the fossils, to the minerals and rock samples, to the chemical compositions in the dynamite used when the mine was still in use. As Cliché as it sounds, the dinosaur fossils were one of my favorite parts of the exhibit hall, however, seeing all the old technology that was used in the operation of the mine was fascinating as well. Most, if not all of the technology seemed to have been preserved, and it is amazing that so much can change in just sixty or seventy years.

Of course, the main part of the tour is indeed the mine itself. As I stated before, only the first thirty feet of the mine can be accessed. Even the top thirty feet is rather impressive. The tour begins at the air doors, and ends at the Thomas S. Warren Museum of Fluorescence. The tour through the mine goes over most of the normal operations of the mine. Do you know what a “Grizzly” is, and why it was the most hated job in the mine, so much so that most people would quit after one day on that job? This is where you find out. Did you know that if a miner forgot his tag before going into the mine, he would not be paid for that day, regardless if he was there or not? Or that they were fired if they forgot their tags twice? Some of the rules of the mine were in fact, quite strict. Of course, not only do the tour guides talk about the Sterling Hill mine, but go over the history of mining in general. And one cannot forget the Rainbow Tunnel, where most of the Fluorescent minerals are shown. Many were mined in NJ, and a few were even mined straight from Sterling Hill when it was still in operation!

There is more, in fact, to do at the Sterling Hill Mining Museum. Outdoor mining and art exhibits, the Rock and Fossil Discovery Centers, all the mining buildings, and what museum would be complete without a gift shop and cafeteria? There is also a small 9/11 memorial. Some of the additional activities, such as the Rock Discovery and Fossil Discovery centers, does cost an additional amount. However, they are well worth the small fee. Mineral Collecting only costs a small additional fee. Sterling Hill tries, and succeeds at having something new to see every time. Each time that I visit, (about three times by now. You’d think I’d have more pictures!) there is something new to see or do.

I would definitely recommend that anyone in the northern New Jersey area visit Sterling Hill Mining Museum. It is one of the few places preserved from the Industrial era, and that is only one of the few things that makes it special. It’s informed and friendly staff makes sure that the museum is a welcoming place for all ages. Typically, the museum is open all year. Dressing for the conditions is important, as part of the tour takes place outside, and the mine is a consistent 54 degrees. I would recommend that anyone with claustrophobia, speak with one of the guides before purchasing tickets. The tour is about two hours long, in total. There are memberships available, and memberships are needed to access some of the special events that are held periodically. Even without a membership, visiting the Sterling Hill Mining Museum is an enriching and fun day for the entire family. To find the Museum, here is the address: The Sterling Hill Mining Museum, 30 Plant Street, Ogdensburg, NJ 07439. For much more information on the mine, its history, and the museum, you can visit their webpage,

All Photos were taken onsite by me 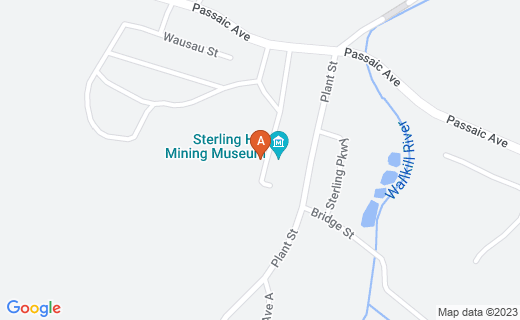