The Tale of Half-Hanged Maggie

Maggie Dickson of Edinburgh, Scotland, was executed on September 2, 1724. She had been arrested and found guilty of the crime of concealing a pregnancy, which was punishable by death in those times. The people of Edinburgh watched as she was hung from the gallows in the Grassmarket, and shortly afterwards, pronounced dead. Her body was removed from the gallows and taken by cart to Musselburgh to be buried.

Despite this seemingly tragic tale, the infamous Maggie Dickson actually died 40 years later in her home, surrounded by her family and loved ones.

The First Life of Maggie Dickson

The tale of Maggie Dickson has become almost a legend among the people of Scotland, but the most intriguing part of this story lies in the fact that it is all true.

Little is known about Maggie's early years, other than that she lived and worked with her husband selling fish. For reasons unknown, her husband deserted her in 1723, leaving her penniless. As women during this time often were forced to rely upon men for all things, Maggie was left desperate for way to provide for herself during very harsh times. She eventually found employment working for an innkeeper in the south of Scotland, and in return was compensated with food and board.

Whilst there, Maggie met and fell in love with the innkeepers son, and the two quickly started a passionate love affair. Shortly afterwards, Maggie became pregnant. She decided to hide her pregnancy out of fear; since, if her employer found out about his sons illegitimate offspring, he might dismiss her and leave her destitute once again, but this time, with another mouth to feed.

Maggie was able to successfully hide her pregnancy from everyone, but issues soon arose. The baby was born prematurely, and died a few days later. Young Maggie panicked at the thought of what the townspeople might think of her , and more importantly, what they might do. She decided to take action, and considered disposing of the body in the river, to remove all evidence of what had happened. However, in her heart she could not bring herself to go through with it, and heart-brokenly left her lifeless newborn by the riverbank with a kiss and a prayer.

Unfortunately, people from the town found the body of the baby the very next day, and were able to trace it back to Maggie. She was tried in the courts, and found guilty of violating the Concealment of Birth Act, a law which stated that if a woman hid her pregnancy and gave birth without help, and the baby died, the mother may be found guilty of murder. Thus it was with Maggie. She was found guilty by the court of Edinburgh and sentenced to hang in public on September 2nd of that year. Citizens watched as Maggie Dickson hung from the gallows until she ceased moving, and was soon pronounced dead.

But That Was Not The End For Ol' Maggie...

And here is where the story gets very interesting. Her body was taken down and, after fighting with the local medical students who wished to use her body for research, Maggie's family eventually gained possession of the body and arranged for it to be buried, as many others had been, in Musselburgh. The driver was very familiar with this route, and took no notice of the bumping and banging sounds of the wagon on the rocky terrain. However, one report claims that he eventually heard some muffled noise that sounded human coming from one of the caskets. Upon opening one, the driver discovered Maggie, alive and well, if not quite traumatized.

Modern historians believe that the wagons bumping movements along the rutted Scottish land acted almost like the technique used in CPR, and the jolting movements actually may have kick-started her heart back to life.

Whatever the cause, the result was that Maggie Dickson was alive again. Scottish officials were baffled; could they execute her again? Or was this profound occurrence not to be taken lightly? After some deliberation, the officials found a Scottish law which stated that no one was to be punished for the same crime twice. Seeing that Maggie had been sentenced to hang until dead, and technically, had done so, the men had no choice but to release her.

After this ordeal, the townspeople who, just days before had shunned and condemned her, greeted her with sympathy and, many times, with a sense of awe. Some years later, Maggie met and married a good man, and had many children. She became a local celebrity, and was referred to all the rest of her long years as "Half-Hangit" Maggie Dickson.

Today, a pub stands along the square which used to be the Grassmarket gallows, bearing the name Maggie Dickson's Pub, ensuring that this incredible story lives on for many years, just as Maggie did.

View the map below to plan your visit. 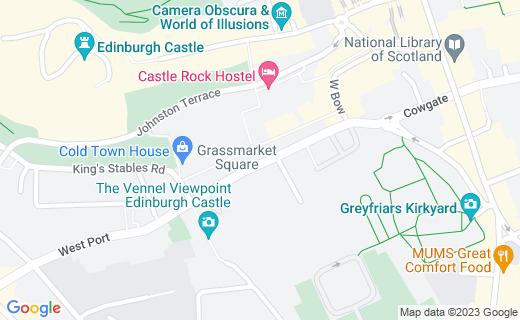