If you want to know a part of Texas history that is inseparable from the formation of the state of Texas, you should visit the Texas Ranger Museum located in Waco, Texas. This museum is conveniently located at the juncture of the Brazos River and Interstate 35, off exit 335B (see the map below). If you are traveling through Waco, the museum is a great place to take a break. You can see a short movie and an enormous amount of history and many artifacts that have been accumulated from the beginnings of this organization to the present.

Upon paying the modest entrance fee, you can take a leisurely tour to see all of the memorabilia that has been collected since 1823, when the Texas Rangers first came into being through the efforts of Stephen F. Austin, in cooperation of the Mexican government. Rangers weren't paid for their work in money, their compensation was land, and the majority of those recruited to be rangers were farmers who were trying to protect their land.

Some of the artifacts you see include the rifles and pistols used by the early rangers, their clothing and other gear that they used. There is also a garbed model ranger on a stuffed horse. Also present are artifacts from the native tribes who inhabited the area, including items from the Apaches and Commanches. As far as guns go, there are at least several hundred of all types and varieties, including submachine guns and weapons used by captured criminals.

Some Early Texas History And The Texas Rangers

The Texas Rangers played a pivotal role in making Texas what it became. They were peace makers primarily, but at times, they were called to meet violence with violence.

The early Texas Rangers were surveyors as well as law enforcement agents, but over time, there was a division in these duties. So, you will see surveyors tools in part of the exhibit that cover the early years. One of the statues in the entrance area is of a surveyor-Ranger.

The early Texas Rangers also came into being during a time when there was a change from cattle driving to fenced-in ranches. One of their roles was to prevent fence cutting and to prosecute those who did. There were also raids against settlers by the native tribes in the region. But not all of the Indian tribes worked against the peace in Texas, as you can see in one of the exhibits below, Lipian Apaches served with the Rangers.

This cooperation with the natives led to the Ranger's learning of guerrilla fighting tactics used by their adversaries. They also became feared because of their fighting skills. Members of the Mexican Army, when trying to regain Texas territory refereed to the Rangers as the "Tejanos diablos," or "devil Texans."

The Myth and Legend of Texas Rangers

The stories of the Texas Rangers have become immortalized and mythologized by the writings of local authors, in comic books and by cinematic productions. There is a specific room that has examples of how the Rangers actions have inspired works in all of these areas, and not only in the United States. Perhaps, most prominent exhibit is the Lone Ranger television series, but there are at least a hundred different examples of artistic works in this room, including other movies, books and comics.

About every 2 hours, there is a documentary movie in the Rangers Hall of Fame section that shows the real history of the Texas Rangers. This movie, "Enforcers," produced by the history channel, shows the victories as well as a few of the failures of the Texas Rangers organization. It is a well-produced documentary that illustrates the beginnings and evolution that has occurred since its inception. There are also terse comments added by Texas historians.

Where to Find The Texas Ranger's Museum 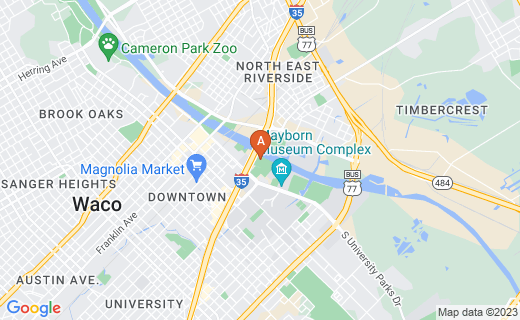 This museum can be accessed of Interstate 35 from exit 335B. It is located next to an old cemetery and Baylor University.

While you are in the vicinity, you may also want to visit the Dr. Pepper museum. It is only a few blocks away in downtown Waco. You can also have a riverside picnic on the tables that are alongside the Brazos River. And, since Baylor University is next to the museum, you can also wander the campus if you wish. Of particular interest to historical buffs is the library.