Another set of beautiful islands to vacation or honeymoon on just a couple of hours by air from Miami, Florida are the Virgin Islands. Named so by Christopher Columbus when he founded them on one of his later voyages (1495), the islands are named after St. Ursula and the 11,000 virgins.

I was fortunate enough to see them on my honeymoon when our cruise ship stopped at
Charlotte Amelie, St. Thomas in the U.S. Virgin Islands. The port/harbor and the sights were just stunning and the water so crystal clear we could seed to the bottom of the sea with all its marine life and coral reefs.

The Virgin Islands actually form a border between the Caribbean Sea and the Atlantic Ocean and are the western group of the Leeward Islands which are the most northern part of the Lesser Antilles.

The Virgin Islands are divided into two two sets of territories: the eastern islands are the British Virgin Islands, an overseas territory of the UK. They are comprised of the islands of Tortola, Virgin Gorda, Jost Vanb Dyke, and Anegada.

The Virgin Passage, a body of water, separates by approximately sixty miles the U.S. Virgin Islands from Puerto Rico (also known as the Spanish Virgin Islands of Vieques and Culebra)

Both sets of islands were originally inhabited by the Arawak, Caribbean, and Cermic Amerindians who all died during the colonial period of the islands. They died through enslavement, disease and mass extermination all brought on by European armies and colonists.

The European colonists arrived after Columbus and established sugar and tobacco plantations, and purchased slaves from Africa. Today, the plantations are gone and the descendents of slaves remain the bulk of the native population. They share a common African-Caribbean heritage with the rest of the English speaking Caribbean islands.

Today, tourism is the chief business and the economies of both sets of islands and there is also quite a retirement community on the islands as well as the tourists and cruise ships that dock daily.

Interestingly, on both the U.S. and British Virgin Islands, cars are driven on the left hand side of the road, but steering wheels are still located on the left side of cars as they are here in the U.S.

Three main islands comprise the U.S. Virgin Islands and they are St. John, St. Thomas, and St. Croix. St. Thomas is the more populated island and is the home of the capital city, Charlotte Amalie. This city is a bustling port town that formally began as an important trading port in the Caribbean. Today, the busy downtown area is filled with classy and casual restaurants, night life, shopping and hotels. The downtown buildings are pastel colored and offer a colorful sight to be sure.

There are duty-free shops galore for all kinds of products, one of them being for rum, which is the top product of the Caribbean islands. The jewelry stores are to die for and specialize in South American emeralds and diamonds. This is also where the cruise ships dock when they arrive in the Virgin Islands.

St. John is the smallest of these three main islands and is filled with great beaches and a lush forest surrounded by tranquil waters. This island is seventy-five percent National Park. St. John's is home to Caneel Bay, Cruz Bay, Trunk Bay and some of the most beautiful beaches in the world. The water is crystal clear. It is here on St. John's that you will find the exquisite private villas, resorts and hotels. There is a marina for docking the many sailboats and yachts that come to the islands.

St. Croix is the more secluded and private of the islands and is a popular place to stay for scuba diving, snorkeling and fishing. There are loads of beaches to relax on, coral reefs for diving and snorkeling and historic ruins to see. There are plenty of hiking trails for the athletic crowd. The Virgin Island National Park is located on St. Croix and offers hiking, camping, scuba diving, snorkeling, sailing and fishing.

The British Virgin Islands are comprised of the islands of Jost Van Dyke, Tortola, Virgin Gorda and Anegada. The largest island is Tortola and the capital city of Road Town is found on this island. Twelve by three miles, this island is full of white sand, green mountains, ruins and rum distilleries.

The great beaches are on the island of Jost Van Dyke and boat tours of the British Virgin Islands are offered here.

On the island of Virgin Gorda the underwater caverns and baths fascinate tourists as well as natives. and the island of Anegada is full of pristine beaches, crystal clear sea water and is a coral island. Great to scuba dive and snorkel here also.

Theses four islands are the largest of the British Virgin Islands and here is where the beach resorts, hotesl and private homes are found.

The Culture of the islands

Although the British and U.S. Virgin Islands are politically separate and belong to two different countries, they are culturally close. The culture is syncretic, which means the islands carry the influences of Western Africa, Europe and the Americas. The Danish owned and controlled the present day U.S. Virgin Islands for many of the early years, but there is very little to no influence from the Danes on the islands.

The greatest influence on the Virgin Islands is from the African nations of today of Nigeria, Senegal, both Congos, Gambia and Ghana. The Africans came from this part of Africa originally as slaves to work in the sugar cane fields from the 17th to the mid-19th century and brought their African traditions with them.

The dominate language on both the U.S. and British islands has always been an English-based Creole from the 19th century. The official language to today is English but Creole is the dialect spoken by the natives at home. There have been brief times of Dutch and French influence to the island culture also.

Today, immigrants come from the Arab world, India and other Caribbean islands. The Virgin Islands continue to undergo creolization, which is an inter-Caribbean migration and cultural contrast with other islands and with the U.S.

Cuisine of the Virgin Islands

The native traditional food of both sets of islands is spicy and hearty with many foods being imported. Naturally, because they are islands, fish is the staple of their diet. All different types of fish from the Caribbean Sea are made into delicious fish dishes.

Fungi (fun-gee) is another main staple of the Virgin Islands diet. It is cornmeal that has been boiled and cooked to a thick consistency and cooked along with okra. It is usually eaten with boiled fish or saltfish.

Callaloo is a soup made from the callaloo bush/leaf that is native on the islands and is somewhat like spinach. It also includes various ingredients of meats and okra used and boiled to a thick stew consistency.

Because of inter-Caribbean migration the Virgin Islands have adopted the dish of roti which is of Indo-Trinidadian origin. This is a curried vegetable and meat wrapped in paper thin dough and quite popular also.

Fruits available in the Virgin Islands are sugar apple, mango, papaya, soursop, genip, sea grapes, tamarind and gooseberries. All of these fruits can be stewed together with sugar for a sweet snack or dessert.

Rum is the traditional and native alcoholic drink of the islands and there are rum stores on every corner in the cities of the islands. Duty free rum and other alcoholic beverages may be purchased in duty free stores and taken home.

Along with these native foods to the Virgin Islands and the Caribbean islands, there are also first class restaurants that offer international cuisine.

What ever your culinary delight, it can be found in the Virgin Islands along with the pristine beaches, and crystal clear water. The idyllic Virgin Islands are a great place to visit! 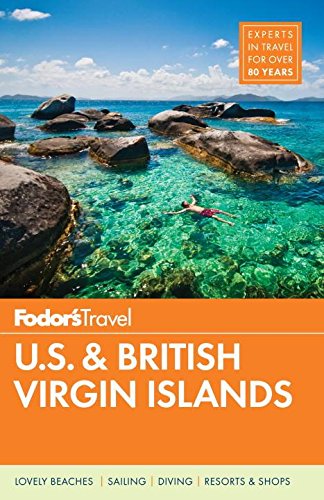