If you are on the bus or in a car and travelling north just above Santiago del Teide you are sure to see this place and wonder what it's like. The village of Valle de Arriba is just a short distance from Santiago del Teide and its location makes it just into south of the island of Tenerife. It is a small and peaceful hamlet in the bottom of a valley with spectacular mountains surrounding it which is so typical of many parts of the Canary Islands.

If you are on the road from Puerto de Erjos going downhill towards Santiago del Teide it is easy to see Valle de Arriba and the side road that leads into it. There is not a lot to see in Valle de Arriba itself apart from houses, a church, a traditional square and small play area for local children.

How to get to Valle de Arriba

"Arriba" means up or above in Spanish and the village of Valle de Arriba is up a road and above Santiago de Teide. The only way to get to Valle de Arriba is on foot, on a bike or in a vehicle. However, there are footpaths leading out of the village and they can be taken to explore the stunning countryside that surrounds it.

The mountains that overlook Valle de Arriba on the one side have Canary Pine forest, whilst the mountains on the opposite side are mostly covered in short vegetation and scrub. In summer this all dries up and goes brown but in winter and spring the mountainsides are green.

Wild flowers and herbs such as the Canary Island Mint (Bystropogon origanifolius) or “Menta Poleo” as it is known in Spanish, can be found growing here. This endemic herb is a popular traditional remedy for various ailments and is enjoyed as a herbal tea.

A road snakes its way upwards on the Mt Teide side of Valle de Arriba and this road provides access to footpaths into the mountains and forests. One route takes you all the way to the village of San José de los Llanos, famous for its "Eco Bar", also known as El Risco, a popular haunt of local musicians.

Following this pathway leads you past the pine woods growing above San José and there are often plenty of pretty Pandora butterflies (Pandoriana pandora) feeding from the wild flowers that flourish at the edge of the woodland. This fritillary butterfly likes to sip nectar from thistles and its caterpillar eats violets (Viola spp).

At a junction there are signposts for other walks you might like to take. One of these goes to the spectacular El Volcán Negro (The Black Volcano). It is a volcanic cone with its sides covered in dark grey ash and cinders.

Valle de Arriba is a great place to explore the surrounding countryside from but you won’t find much else there. If you want shops or bars and restaurants, then the nearby Santiago del Teide can provide everything its neighbour lacks.

Buses run through Santiago del Teide and also from it to the popular and picturesque mountain village of Masca. This could be your starting point for travelling to another unique Tenerife village!

Valle de Arriba on the map 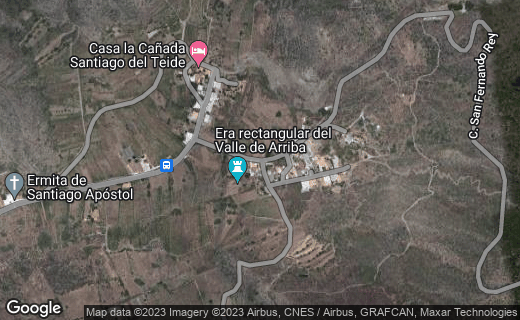