Things to Do in Serbia Part One

Things To Do In Serbia

There are over million things to do in Serbia. In this series, I will introduce you to the most interesting places that are located along the main roads in Serbia from the Subotica in the nord to the Presevo in the south and from the Sid in the East to the Dimitrovgrad in the west.

Map of Places To Visit

Visit My Blog For More Information About Belgrade

Serbia is situated in the central part of the Balkan Peninsula. In all, 588.6 kilometers of the Danube River, the longest in Europe, pass through Serbia or constitute sections of it's border. Serbia's Danube basin region is the most densely populated and economically best-developed area in the country.

Climate: Diverse. Northern areas feature a continental climate, hilly parts of the country have a moderate continental climate. Mountainous regions have alpine climate. January and February are the coldest months while July is the hottest, with temperatures reaching 35-44 Celsius.

Religions: Although most of population is Eastern Orthodox Christian, there are sizeable Roman Catholic and Islamic communities.

Banks and post offices: Open 8 am to 7 pm working days, while at Saturday from 8 am to 3 pm. monetary unit is Dinar.

Health centers: Hospitals and clinics offer emergency health services around the clock. Pharmacies are open from 8 am to 8 pm.

Museums: Although hours vary, most museums are closed Mondays. tickets are inexpensive (0.3-1.5 EUR).

Churches and monasteries: Closed after evening services (7 pm). All enforce a dress code: pants or long skirts are a must, shoulders and stomach have to be covered.

Entry visa & tourist Visit Permissions: The citizens of EEC need no entry visa and may stay within the territory of Serbia up to 90 days. Individual entries from non EEC countries are permitted in Serbia up to the visa expire date.

The Serbian Museum of Bread

The journey from Sid to Belgrade

Sid: Sid is located at the very border between Serbia and Croatia on the southwest slopes of the Fruska Gora mountain. The archaeological excavations are testament of a very long history, dwellings date all the way to the Iron Age. The vicinities of Sid include the monastery of Pribina glava, the church in the village Molovin, the Vorov, Vrnjak and Morovic hunting grounds. There is also a Naïve Art Museum Ilianum.

On the right side of the highway, 15 km south from Sid, you will find the village of Morovic. At the very center of the village there are still visible reminders of a once important medieval fortification, and interesting as well is the Catholic Church of Holly Mary, built at the cemetery in the 13th Century in the Roman-Gothic style.

Antique Sirmium is the city of Caesars and martyrs: city of Caesars, because some of them were born or died here, and city of martyrs, because of the bloody persecution of Christian believers in the times of Diocletian. Sirmium built at the crossroads of important routes and on the shores of a large navigable river, rapidly evolved into a large center with a multitude of religious, military and civil institutions. The vicinity of the military border on the Danube and the barbarian tribes lead to frequent visits of Roman emperors and the fact was one more reason for the city's rapid expansion. Marcus Aurelius, the philosopher emperor, died in his Sirmium palace.During the tetrarch, Sirmium flourished and became the capital of the province Second Panonia. At its peak, Sirmium had 100.000 inhabitants. In 441 Sirmium was pillaged by the Huns, but suffered terribly during three years siege of Avars in 580-582.

The Avars destroyed Sirmium in 582, and it regained its importance as an episcope office only in the 9th Century as a part of the Bulgarian state.During the 11th Century rulers from Byzantine and Hungary alerted, until 1180 when it belonged to Hungary and was named Dmitrovica after the Benedictine monastery of St. Dimitri. The Hungarian population retreated when the Turks arrived, and Srem became more and more populated with Serbs. The Srem Museum was officially established in 1946. Of course, the most important objects come from Sirmium - inside the museum there are the remains of villa urbana.

Zasavica is a unique wildlife reserve. It is just 15 km south-west from Sremska Mitrovica and consists of the Jovanca and Prekopac canals. This unique habitat contains more than 120 varieties of birds and 20 types of fish. In 1997, this wilderness gained special protection rights regarding its unique vegetation (particularly the white and yellow water lily) and animal wildlife. In 2004, in an attempt to replenish the beaver population, a small beaver population was released. Zasavica has designated areas for fly-fisherman, notably fishing for wild carp, pike and dace, along with different aquatic sports for tourists to enjoy, or simply have a lunch of "eco-bread" and fish.

The Serbian Museum of Bread (Pecinci)

In the village of Pecinci in Srem, 42 km from Belgrade, one can find the first museum of bread in Serbia and the second in the world. Visiting the museum is more than usual museum visit. The kind host cordially invites each visitor as if in his own home. Today museum holds more than two thousand objects. In this unusual museum you will be shown the way the wheat grain was turned into the flour under genuine Neolithic grindstone, or a spinning treadmill. The central part of the museum consist of a collection of 96 ritual breads. In this museum, visitors are allowed to touch the objects and see actual working machines.

The famous reserve of the Obed swamps, between the Obrez and Kupinovo communities and along the Sava River, is one of the oldest protected natural reserves in the world (since 1874). It is actually a complex of swampland, waterlogged marsh, wetlands, and flooded forests inhabited by more than 50 species of mammals, over 1000 insect subspecies and more than 200 bird varieties, and for those birds the Obed swamp is renowned. Vegetation is also abundant and counts among its treasures a forest of hundred-year old oak-trees in an area called Fat Mountain. There, the white-tailed eagle nests in the highest branches of the grove-oak. Only during a specific time-periods and in strictly limited sports are fishing and hunting allowed. With the little luck you will be able to see beavers, herons or cranes in the swamps. One should only beware of the white-eared snake that became venomous after cross-breading with the viper. A hotel, the "Obed Swamp", on the edge of the reserve provides boats to rent and amiable boatmen will guide you to the best places to pick water lilies.

Near the Obed swamp is Kupinovo, one of the most beautiful villages of the all Srem and the only that once was "a royal city in the Srem". On an island in the swamp near Kupinovo, stand the remainders of a fortress, built in Hungarian in the 8th and 9th Centuries. The beautiful St. Luka church was once linked to the fortress by a bridge. Next to St. Luka's is a small ethno-park, worthwhile of a visit with its several decaying buildings, a decorated wooden barn from 1909.

Map of Serbia, From Sid to Belgrade 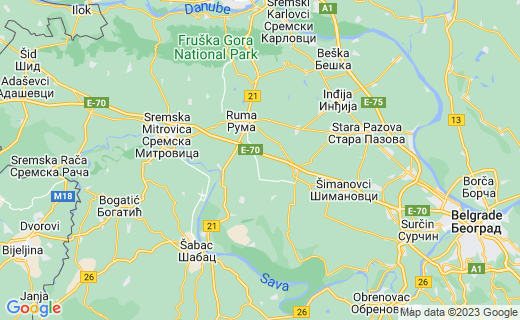