Things to do in San Antonio: Visit the Mission Concepcion

Of the five missions in San Antonio, Texas, Mission Concepcion (more completely known as Mission Nuestra Señora de la Purísima Concepción de Acuña) is the best-preserved. Restoration work has taken place at each of these historic sites within the San Antonio Missions National Park, and of course, at the Alamo (the most well known of the five missions), but this mission structure is the most "original."

The missions date back to the 18th century along the San Antonio river. Missionaries offered protection from warring Indian tribes and the threat of disease to the Coauhilan (hunter and gatherer) tribes in the area. In exchange, the Indians received religious instruction and helped work fields and take care of livestock.

Unlike these other missions, you can still see original frescoes painted on the walls and ceilings inside the Mission Concepcion because neither the roof, nor walls of the church were ever lost to age or neglect. Restoration work inside the church was completed in 2010.

The over 250-year old structure is an architectural treasure, as well as a key to understanding the influence of Spanish Missionaries in the region before the United States even declared independence from England. The southwest areas of the country have a rich, varied history, influenced by Spain, Mexico, France and the Republic of Texas.

Directions to the Mission Concepcion in San Antonio 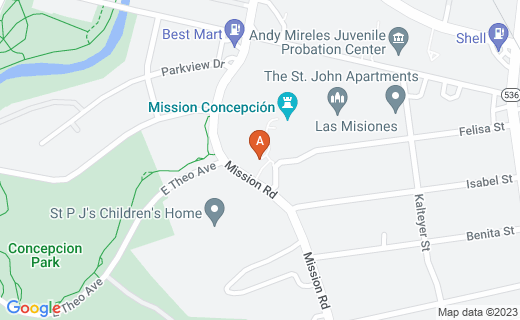 History of the Mission Concepcion in San Antonio

Like the other four San Antonio missions, the Mission Concepcion was built near the banks of the San Antonio River.

The missionaries offered shelter, as well as Christian religion education and a structured life, to hunter-gatherer Indian tribes (Coahuiltecan) that were being persecuted by warring Apache tribes, and were also falling victim to new diseases imported to the Americas.

The Mission Concepcion was originally established in East Texas, but was moved in 1731 to San Antonio. Today, it is the best preserved of all Texas missions. You can still attend Catholic Mass every Sunday at the church, if you wish! It is a National Historic Landmark.

Similar to the history of the Alamo, the structure was eventually used in the Texas Revolution as a fort. The Battle of Concepcion actually took place before the Battle of the Alamo, in October 1835, and was defended by one of the heroes of the Alamo, James Bowie. Over 100 years later, the mission - along with other missions in Texas - was restored to its original glory.

Fresco Work Inside the Mission Concepcion

Visiting San Antonio: Things to Pack for Your Trip to the Lone Star State

Have You Visited the Mission Concepcion in San Antonio?

What is a Fresco Painting?

When you hear the term "fresco," you probably think of paintings on ancient Italian walls and in temples. In actuality, the word refers to the artistic technique, which can exist no matter when the painting was created, or where it is located.

A fresco, in general terms, is a mural painting that the artist has created upon freshly laid plaster. In fact, the word "fresco," is based on the Italian word root which means "fresh." When creating a fresco, artists use water to set the pigment into the plaster so that the painting literally becomes a part of the wall or ceiling.

Many of the missions of San Antonio were adorned with fresco paintings both within and outside of the church buildings. Unfortunately, the ravages of time over the past several centuries and weather have deteriorated the frescoes to the point that they can no longer be witnessed. At the Mission Concepcion, the fact that the roof and walls did not collapse leads to the result that beautiful frescoes are still visible today within the sanctuary and other areas of the mission structure.

San Antonio, Texas is in the southwest region of the United States. It is often warm year-round and can be humid. You might want to pack an umbrella or hat just in case thundershowers pass through. Be prepared for warm weather no matter what time of year you are visiting.

Of course, it is wise to include a light jacket, umbrella and/or sweatshirt for cooler days.

The City of San Antonio is one of the three "triangle" cities in Texas, including Dallas/Fort Worth and Austin, the capitol city. If you visit Texas, you might wish to consider planning visiting all three major cities. Such a trip can be feasible with 7-14 days to the Lone Star State.

Visiting Texas can give you a unique perspective on the frontier/Revolutionary/Civil War days of this County. This is literally history brought to life.

For those who do not know or appreciate why Texas is called the "Lone Star State," you can learn quite a bit about the region's independence from Mexico and the U.S., and its eventual decision to accept Congress's decision to accept it as part of the Union.

Of course, a Confederacy history lesson is not complete without the stories related to Texas and the U.S. Civil War. When you visit Texas, you can learn quite a a bit about this very independent region and how it its into the U.S.A. of today.

The Missions of San Antonio