Amanda has lived her whole life in southeastern Michigan. She loves writing about the fun these little towns and cities have to offer!

If you live around Auburn Hills, Michigan and you are seeking free summer fun for the family then you definitely need to check out the annual festival held in this downtown every year.

Auburn Hills is located near Michigan cities like Rochester Hills and Troy, and about 30 miles from Detroit. The city is home to Great Lakes Crossing Outlets (which includes the Sea Life Michigan Aquarium). And for years The Palace played host to many a pro basketball game and concert.

But lesser known is the Auburn Hills Summerfest. A two-day, family-friendly "party" for the joy of celebrating the city, promoting the area's shops and parks, and inspiring feelings of community. Though a yearly event, I'd personally yet to attend until 2015. Now I'll be sure never to miss it!

Free family fun! I'll start with that piece of information, since I know "Free and Fun" is an important factor to many families. Our group consisted of two preteen girls, two twenty-somethings, and a couple in their fifties - and we all found activities to keep us busy.

Each year, sometime in June, Downtown Auburn Hills shuts down their main street to host Summerfest. The event runs from mid-afternoon on Friday until 10:00 PM, then picks up again on Saturday early in the morning and once more lasts until the clock strikes 10:00. There is no entry fee, nor a parking fee. Most activities are also free of charge.

Kids on their end-of-the-school-year high are the big focus at Summerfest, with bouncy obstacle courses and houses and games and even a water slide! A rock wall, games, and the chance to decorate the downtown sidewalks also keep the children busy.

The whole family can enjoy these activities as well. For example, the rock wall allowed for more than an average adult male's weight. An ice cream social was held for two hours on Friday night. Bands and local dance groups performed. Food vendors sold sizzling barbecue. A classic car show was held near the river. A craft market lined the middle of the closed-off street for shopping or browsing.

A little something for everyone!

As stated above, many of the activities obviously have children's summer fun in mind. But despite the lines of little ones and my labeling of this section "For the Kids", please don't let that stop you as an adult or teen from participating in any excitement that the festival has to offer!

Bounce attractions (aka bounce houses - but they're a little more elaborate!) were the main attention-getter lining the downtown. One particular favorite seemed to be the circular bounce house in which the kids tried to knock each other down by punching around a lightweight pendulum ball. A long, bright inflatable attraction was hard to miss as an obstacle course race for two players at a time.

One tall inflatable was even set up as a water slide! No bathing suit required, though those who came prepared with towels were grateful. I'm sure you can imagine what a hit this impromptu water attraction was with the children. Take a look at the video for a glimpse!

Now when you think "mechanical bull" you may not think of children. But this particular challenge of staying atop a spinning, bouncing ride was all fun and games; safety provided by the surrounding soft surface. Day one allowed players a chance at riding the 'waves' of a mechanical surfboard, while day two replaced the board with a 'real' ride-on bull.

Simple carnival-style toss games were available, as well as chances to throw baseballs and footballs and get your speed measured. The rock wall was an all-ages activity, so long as the climber was between 45 and 250 pounds. I should also mention that nearly every child I saw walking around Summerfest 2015 had at least one of the following: a face painting, tattoo art, or a balloon sculpture.

Have you ever attended Summerfest in Auburn Hills?

As mentioned above, Downtown Auburn Hills Summerfest is lined up straight through the temporarily closed main street. There aren't many shops in the district (yet), but plenty of chances to eat for different prices and styles!

For example: The Toasted Bun is a small diner with cheap breakfast specials and the ability to get an easy meal like a cheeseburger with fries to go. Jo'Angela's Pizzeria & Deli offered a quick stop-in for a pizza or sandwich in an air conditioned, casual dining environment. Duffy's Pub had specials going on their rib dinners and, of course, gave the 21+ crowd a chance for an adult beverage.

Where shopping fits in is the many vendors selling unique and often handmade product up and down the middle of the festival. In winding my way through the artisan and vendor tents during the 2015 Summerfest I saw candy imported from Spain, pop culture hair bows and magnets, traditional crochet hats, beautiful jewelry, dog accessories and decor, Victorian-themed and embellished collectibles, and lawn ornaments - to name only several types of merchants.

In addition to traditional brick-and-mortar restaurants, vendors sold Kona Ice and fudge. A local shop set out a cart for the sale of hot dogs and soda. Of course, the big food draw was the barbecue! More on the BBQ Cook-Off down below, but there were also a few vendors who specialized in barbecue treats from traditional ribs to pulled pork nachos!

Friday evening from 6 PM to 8 PM also saw an old-fashioned ice cream social hosted in the tented area, in front of the stage setup.

The Auburn Hills Summerfest offers up a showcase of numerous bands, dancers, and other performers - literally from the time the festival opens on Friday afternoon to its close that night, then again for the entirety of festival hours on Saturday.

For example, to kick off the party on Friday we watched the Cruisin' USA Line Dancers, a fun and lighthearted treat. By the time dusk was starting to roll in Fifty Amp Fuse had taken the stage with covers of hits from decades past to present day.

Did I mention there was a large dance floor too? While ample room to sit and listen or stand to the side to watch was provided, getting up and grooving to the music was definitely encouraged. It was truly a delight to see such a mixed crowd all dancing, whether with style and talent or, um... without. And all clearly having fun regardless.

One of the main events at Auburn Hills Summerfest is the BBQ Cook-Off. Or at full length: Michigan's State Championship BBQ Cook-Off, sanctioned by the Kansas City Barbecue Society. With 30+ teams all competing to impress the official judges with their barbecue recipes, that's a lot of yummy smells in the air!

For fun and fitness and (most importantly) a chance to support the Easter Seals, many attendees participated in the Color-Me Extraordinary 5K Run/Walk. All ages were welcome!

While slightly distanced from the main events of downtown Auburn Hills, a classic car show was a big draw at Riverside Park. The "By the River Car Show" was hosted for the 8th annual year in summer of 2015.

Animal lovers could bring their dogs for a pet costume parade. A photo booth was located on the main strip of festival events, offering picture mementos for free. Kids could decorate the sidewalks during the sidewalk chalk art contest. There was even a teen dodge-ball tournament.

I wouldn't be surprised if I missed something, nor if Auburn Hills added more events or changed things up for the following years. I welcome anyone who has attended the AH Summerfest to comment their favorite activities, foods, music, and more - especially anything I happened to overlook!

For tips, a map of the general downtown Auburn Hills area, and more pictures keep scrolling down. And if you're a resident of Auburn Hills and haven't yet heard, the hashtag "ThrillsInAuburnHills" is being encouraged by the city as accompaniment to photos and videos of any local summer fun shared on social media. 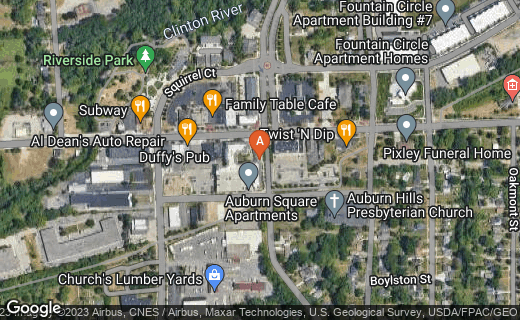 The Den is a free space open to the community for quiet reading, work, and group study. It resides on the edge of downtown in the midst of Summerfest.