Travel on Earth and in Space

The travel and tourism sectors comprise a large share of the local economy in the Greater Washington DC Area, but math and science-related industries contribute a larger share. Revolutionary and Civil War history fills the area with National Historic Sites. Scientific history here has led to not only visitors' attractions but also jobs in aerospace manufacturing and exploration.

The area around the suburb of Gaithersburg maintains a healthy local economy via the industries of aerospace, defense, technologies, and healthcare. 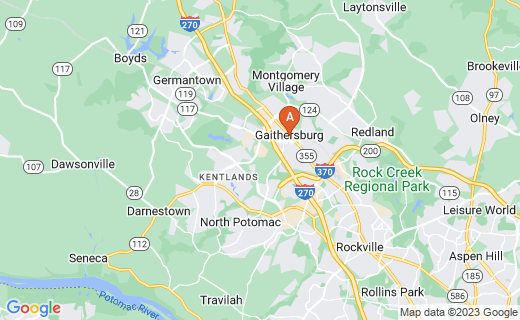 Publications such as Forbes Magazine have recognized the suburb as one of the Best 25 Places to Move for business and work in the nation since 2009.

A Tavern, a Tree, and an Observatory

A settler named Ben Gaither the house in 1802 where a famous oak tree stood. The oak tree is a forgotten symbol of the United States and several of these trees, such as the Charter Oak in the east have been central to history and love of country. Gaithersburg’s was the Forest Oak, which lived for 300 years until 1997. Gaithersburg incorporated after the Civil War, in 1878, with the Forest Oak standing by since the 1600s, watching civilizations, developments, wars, and famous historical figures pass by.

The Baltimore and Ohio Railroad (The B & O) arrived as it did to Rockville in late 1800s. The B & O transported a seasonal community to Gaithersburg each summer from Washington, DC as the concept of vacations expanded after the bloodshed of the Civil War and the rise of Reconstruction and business overall, aided by the rail lines. The B & O stations in Rockville and Gaithersburg are both National Historic Landmarks.

The Gaithersburg B & O Station is a museum that is the centerpiece of the Olde Town Gaithersburg District, with a Freight House, a History Park, a gift shop, and separate permanent and traveling displays of railroad cars and engines. An annual Celebrate Gaithersburg in Olde Towne Street Festival is held not far form this complex and includes several square blocks of music, concessions, demonstrations, entertainment, and family activities.

The Gaithersburg City Hall today resembles a large house, because it is a house. Once the home of Edward P. Schwartz, it stood among a well-known peony garden that grew over 400 varieties of peonies from around the world on a few acres of land before WWI. It was the major tourist attraction besides the Forest Oak. President Woodrow Wilson once visited to admire the expanse of flowers. The home was refurbished into city offices in the middle of the 20th Century.

National Institute of Standards and Technology

In mid-1961, the National Bureau of Standards (National Institute of Standards and Technology) began construction of its first Gaithersburg building, which can be seen in the photograph above. This building and its activities drew an unexpected level of growth to the community.

Today, the facility houses certain standard weights and measures for scientific research, including a standard meter, and a standard kilogram as foundation gold-standard measurements. Because of the standard measures house in the city, Gaithersburg is sometimes called the "Science Capital of the United States."

Scientific firms have followed the agency of standards to Gaithersburg to do business sine the early 1960s. This city is now a major high-tech region for the 21st century. Although agricultural activities began to phase out, several working farms and historic communities were preserved to maintain the culture and traditions of Colonial, Civil War, and Victorian Era Maryland.

Additional measurement standards are connected with the Gaithersburg Latitude Observatory (GLO), discussed below.

The National Institute of Standards and Technology began in 1961 and a population influx followed, booming in the 1990s - 2000s. Agricultural and aerospace manufacturing production in the area is increasing today as well. 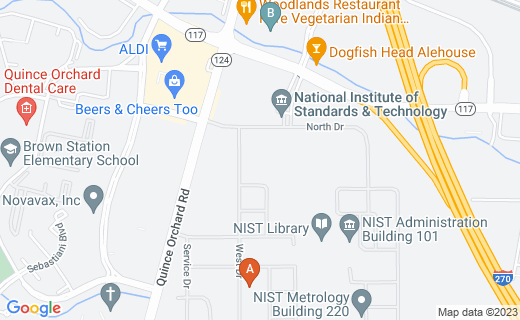 The Gaithersburg Latitude Observatory is a National Historic Landmark and one of only six observatories constructed worldwide in 1899 to study how much the Earth wobbles around its north-south axis.

The original extensive data (still accurate) was collected until 1932, but the GLO continued in use for another 50 years to 1982 when computers took over. Gaithersburg is a scientific hub that includes both GLO and NIST as well as other research companies.

The GLO is 13 feet square, wooden, with a louver-gabled roof (which opens), a small porch on one side, and a shed attached on another. South of the building, the Meridian Mark Pier (the azimuth marker), contains a four-foot high green pagoda used to align the telescope. Five additional monuments mark longitudes and latitudes, the elevation above sea level, and the direction of magnetic north. One is still actively used in GPS satellite-tracking.

A historic document produced in Gaithersburg and Washington DC is the United States Coast and Geodetic Survey (USCGS) Superintendent's Report for 1898-99. Well over 100 years old, the information in the document is still highly relevant to 21st century needs..

The 1899 document contains a written agreement among members of the International Geodetic Association in the industrializing 19th century to construct six observatories in a circle in the northern hemisphere from which to measure the variations in latitude resulting from a tilt and wobble of the Earth (caused by planetary shape) along the north-south axis. Additional causes are posited to be rocket launches and global warming, although not yet validated.

The historic agreement created a program that originally lasted for 15 years from 1899 – 1914 and was named the International Polar Motion Service.

The six cooperating observatories in the program were built and opened in 1899, each as near as possible to the latitude of 39’ 08” (39 degrees, 08 minutes) North Latitude. Observers at these points around globe work from the following locations:

Charjui was cut off in World War I, but the telescope continued to record information until 1919. After WWI, the USSR built a replacement for it in Samarkand. Five stations recorded information from 1899 until 1914 or as late as 1982, when computer technology subsumed the functions of the observatories.

The Japanese station led a project of star study among the original six stations under the astronomer, Dr. Kimura. Twelve groups of six pairs of stars, 144 total, were included and two groups of stars per night were observed at each observatory station within a specific schedule of dates, times, and durations. All was coordinated by Japan. The irregular daily motion of the Earth's axis was previously thought to be minuscule and related latitude variations were recorded to 1914.

The telescope data delivered by the original six observatories is a massive database and still useful to 21st century scientists.

The combined telescopes’ information database is relevant and useful, beginning from the 19th century, now in its third century of use. It has been applied to determine that the wobble in the Earth’s north-south axis causes it to draw its own large circle once every 26,000 years.

In addition, the Pole Star changes in part, because of this wobble. While the North Star is Polaris now, it will be Vega in constellation Lyra in the year 15,010 AD.

Preserving the landmark, the City of Gaithersburg has restored GLO as an aerospace/astronomy science education center for students of local schools.

Federal and State Employment Projects of Highest Need to 2024

The state, county, and US federal government estimate that the following list of fast-growing jobs top the list of openings for several years in and around Gaithersburg.

Research by Dooris, et.al. supports the fact that Gaithersburg leaders are promoting the development of new facilities for high quality, effective post-secondary education that lead to actual jobs in high demand.

Johns Hopkins University, Then and Now