Travel, Job Growth and Low Cost of Living In Utah

Two cities in Utah were awarded recognition on CNNMoney's Top 100 Cities as of 2010 and these cities are still favorites for many reasons. They did not aim to make the list, but planned for several years and on into 2030 to develop as much land as is available to them into top flight residential, business, educational, retail, transport, and greenspace areas.

These places have done this with an impressive display of aggressive positive action that is jaw-dropping. Together, they are a creative hurricane in the desert.

Named after Utah’s Jordan River, South Jordan is planning to support a population of 90,000 people by 2030. It is already a large suburb of Salt Lake City, about 18 miles to the northeast.

On South Jordan's northern border, West Jordan plans to increase its population, though not as quickly as South Jordan. 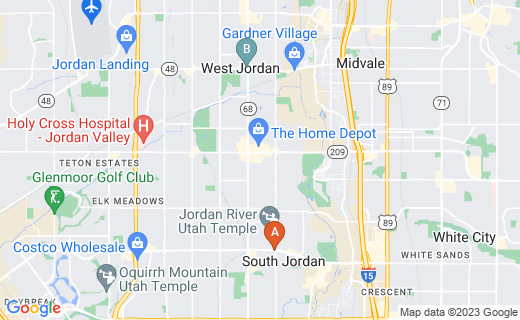 Location of Favorite Cities in Utah

Both suburbs lie in the Salt Lake Valley with the Jordan River flowing down the center and a large Mountain Range on either side (see map below). South Jordan’s plans for future growth are more than big. Construction of a master-planned Daybreak Community covers whole western half of the city and will double population.

South Jordan is already the first city in the world to have two LDS temples: Jordan River Utah Temple and Oquirrh (like ochre) Mountain Utah Temple.

At the same time, Jordan Landing in West Jordan already houses a large number of residents and provides a 2,000,000 square foot shopping center and entertainment complex.

The population of South Jordon climbed steadily from 1995 to 2010, hitting 56,206 in 2010, according to city records. A major jump occurred from 2005 – 2006 and South Jordan is still one of the fastest growing cities in Utah. Today, it is second in size among them, with a median population age of only 28.6 years – a young city whose residents plan to stay through retirement. West Jordan is the 4th largest city in the state, with a median population age younger at 28 years.

However, there is plenty of room to grow in this landscape. Residential growth is expected to climb until South Jordan reaches an optimal population projected at 90,000 and West Jordan is already at 104,000+.

Antelope Island is renowned for its large bison herd descended from stock of thousands of years ago, as well as pronghorn antelope (hence, the island name), mule dear, bobcats, badgers, coyotes, porcupines, jackrabbits, and others. Bird Life? Antelope Island is home to curlews, burrowing owls, chuckars, raptors, grebes, Wilson's phalaropes, and inland gulls. Native grasses make a beautiful landscape and in October each year, the bison are rounded up for health checkups (after a rest) and the public is invited for the Bison Roundup. It's amazing!

Best Cities in Utah for Tourism and Jobs 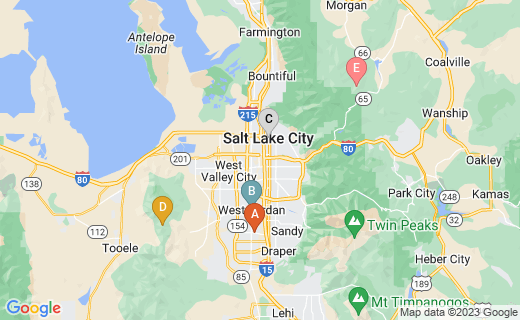 The Historic Parrish Place Bed and Breakfast located in Salt Lake City, Utah, offers charm an elegance in a unique setting. Not just for Honeymoons and Anniversaries, the Parrish Place is also loved by business travelers that need the personal servic

The job market in the suburbs of Salt Lake City rivals that of the suburbs of Minneapolis in the types and numbers of jobs offered and those projected for the future, as well as in the number hiring employers and industries needing workers.

South and West Jordan enjoy access to ocer 30,000 jobs during June 2015, far increased from the 17,200 job openings of September 2010. Business and population continues to grow.

The South Jordan area was largely agricultural even into the late 1980s (especially in sugar beet cultivation and sugar processing), but became more residential, white-collar/business services, and sales- and services-oriented from 1990 - 2020.

West Jordan was traditionally supported by the lumber and sawmill/grain milling industries, along with the mining that still operates today. Both suburbs have become more oriented toward retail (including that related to Travel and Tourism), business services, and personal services since 2000, although Healthcare and IT positions are also increasing. The number of preschools and related staff positions are increasing as the number of young families in the area rises.

Numbers of job listings have increased significantly, especially throughout 2010 and 2014 - 2015. ARRA Stimulus and other public and private funding for Infrastructure improvements and expansions, Water Systems, Residential Planning, and Transportation were successful. New Rapid Rail lines and train stops, and highway improvements will make travel faster among Salt Lake City and its suburbs even more efficient.

Higher Education in the Suburbs

In addition to the expansion of higher education, South and West Jordan both offer excellent school systems. Further, preschools with high standards are increasing in numbers, with well-trained and vetted staff.