A Manufacturing Center in America on Lake Winnebago

The job and business market of Neenah is strong in comparison to the rest of the nation, allowing the city to continue to develop new Travel and Tourism attractions for visitors and new residents.

Located along the Fox River and Lake Winnebago, outdoor activities and water sports are popular among the Fox Cities from Oskosh through Neenah and Appleton, northward to the famous Green Bay, Wisconsin. Route 41 takes drivers through the several cities, towns and villages along the Fox River fr an easy trip. People are moving to this region as well.

Relocation for Attractions and Jobs

From spring 2009 - spring 2010, job listings in Neenah increased by 30%, relative to a countrywide decline of 24%; and, jobs have continued to increase.

Neenah and the Oshkosh-Neenah Metro Area market make up one of the Top 50 Manufacturing Centers of America, with one-third of the working population employed in diverse manufacturing concerns.

Neenah is an American Indigenous-Peoples word, possibly from the Winnebago or Menominee Nation. It refers to powerful moving waters like those in rivers and streams. Located in the Fox River Valley, 30 miles southwest of Green Bay, this city was built on Lake Winnebago.

In early 2010, it became well known as the fastest growing city in the state, according to Bloomberg BusinessWeek data at http://www.businessweek.com.

Neenah supports more than 1,000 businesses and is an economic leader in an area of Wisconsin known as the New North. This is an 18-county marketplace in Northeast Wisconsin that is progressive, forward-looking, and sustained by ongoing local and regional economic plans.

The Neenah Metro area was recognized by Forbes magazine as one of the “Best Small Places for Business & Careers” in 2009. In 2010, it received the distinction of fastest growing place in Wisconsin.

Neenah is a “Best Performing City” as designated by the well known Milken Institute. The Fox Cities together are on the list of 100 Best Communities for Young People and has deserved that honor from America’s Promise Alliance for Youth in 2006, 2007 & 2008. As such a city, Neenah consistently provides young people with a healthy, safe, engaged, and encouraging hometown.

Neenah Of the New North and Some Fox Cities 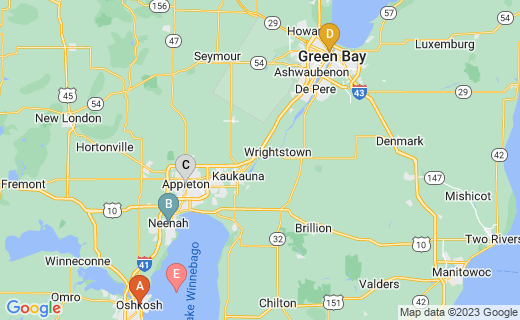 Just 30 miles northeast of Neenah, Green Bay is not am official "Fox City." The Fox River flows into it and The Fox River Trail covers 26 miles here.

Attractions of The Fox Cities

The self proclaimed Fox Cites include, from southwest to northeast: 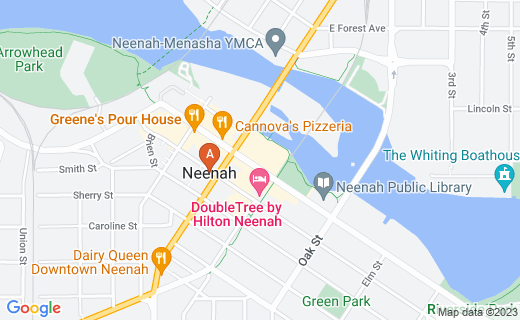 The City of Neenah is partially surrounded by the less populated Town of Neenah, a separate entity that is not growing as quickly as the City.

The City of Neenah is one of the Fox Cities or Fox River Valley Cities of Northeast Wisconsin. It is located farthest southwest in the chain of some two dozen cities, villages, and towns.

Neenah is usually taken together with a neighbor and called the Oshkosh-Neenah Metro Area for examining travel attractions, businesses, and labor markets, along with other data like census figures.

You may remember the slogan for a local clothing manufacturer: “Oshkosh, by Gosh!”

Another piece of Neenah includes part of an island named for a former governor: Doty Island.

The Neenah area grew in an industrial/manufacturing and agricultural economy during territorial days before statehood. Missionary efforts with the Menominee Nation also grew at this time, in the 1830s.

The French arrived in today's Greenbay in the early 1600s, eventually following the Fox River southward by mid-century. They were joined by Germans, the Dutch, and the Irish. These early settlers built villages all along the Fox River, resulting in the Fox Cities of today, although Green Bay does not adopt the designation.

Between 2010 and 2012, the total list of communities used by the Chamber increased population by over 8,400 people in just two years.

Many of America's unemployed during 2008 -2010 and thereafter felt that there was no manufacturing business left in the USA. However, the fact is, Neenah produces paper and iron products and is prolific in the printing industry as well. These are all manufacturing and blue collar trades that also now require IT and manufacturing engineers as well.

Kimberly-Clark headquarters moved out of Neenah to take advantage of the lack of a state income tax in Texas, but continued its successful operations in paper products in Neenah.Thus, not all of manufacturing moved from Wisconsin.

As for iron and steel, Neenah is famous for its manhole covers produced in the Neenah Foundry.

NOTE: A 21st Century Employment Interview Question is this: “Why are manhole covers round?” If you have not considered this one, see Weird and Wacky Interview Questions. What additional explanations you can offer besides the following?

→ Why are Manhole Covers Round?

Six of the Top 9 Employers in Neenah are active in the manufacture and distribution of Paper & Plastics. Other successful industries include Printing/Publishing, Commercial Machines, Computer Techology, Specialty Foods/Packaging, and Transportation.

Higher Education for Manufacturing and Science

K-12 Education in Neenah advanced in 2009-14 with the introduction of its new Manufacturing & Engineering Academy. It works to create new engineering and technical jobs and to provide well trained professionals to full them, all at the high school level.

As in other of the fast growing US cities, this academy makes partnerships with high quality public schools, higher education, and private business. It STEM courses: science, engineering, mathematics, and technology - skills that place students directly into high demand, well-paying careers. Best Practices for learning are uses, specifically the hands-on problem-solving project. Built on the Asian principle “When I do, I learn”, the hands-on approach is also representative of American Know-How -- America was built by hand as the first settlers arrived in the Wild West as they had done earlier on the just-as-wild Eastern Seaboard and Central States.

Nearly 20 colleges and universities operate within a 60-mile radius of the Fox Cities. The most convenient educational centers to Neenah include: 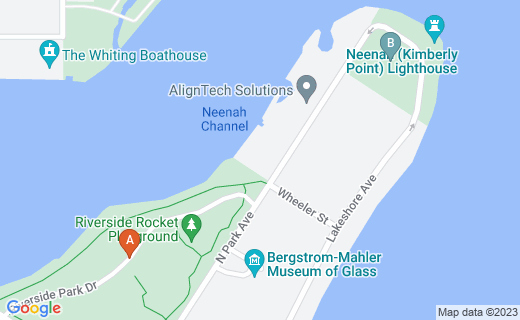 Historic Downtown Neenah is a revitalized place of shops, eateries, and history.

At the far end of the historic, visitors can tour the preserved mansions of local paper barons that made their fortunes in Neenah, much as the lumber barons did just beyond Downtown Bay City, Michigan, not so far away.

The forests were lushly thick in both places, with potential wealth, when lumbering and paper production reached their zenith. Replanting has helped to provide a new sustainability in more recent years. The Neenah Paper Mansions are located around Kimberly Point and Riverside Parks, where the walking tour shows the architectural culture beside Lake Winnebago and the Fox River.

Future Neenah, Inc. is the nonprofit corporation that promotes all of this economic and cultural expansion in Neenah, with historic preservation, new events, and many years' worth of planning into the future. 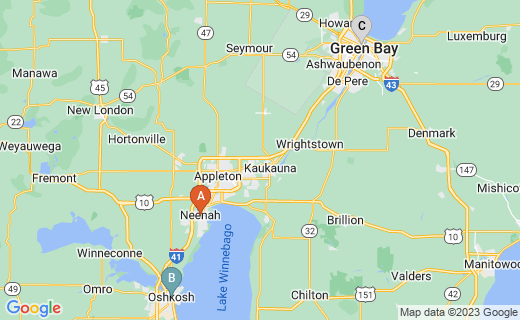 Neenah is just 13 miles north of Oshkosh along Route 41.