Graduated in Geography with a major in Environmental Protection. In love with sustainability, ecology, geology and nature.

Slovenia - the country of castles

Castles always prey on our imagination: they were home to kings and queens, emperors, and empress, princes, and princesses, knights, sometimes even ghosts and fears.

Slovenia is full of castles, mansions, and forts (more than 1000 castle locations). They were formed at different times during the medieval, Renaissance and Baroque periods. The first traces of their construction are found even in antiquity.

Slovenian castles are a great proof of country's history. They are somehow like our ancestors. Often they were paid too little attention, and some of them are now in ruins or have completely disappeared.

Gorenjska - Upper Carniola (German: Oberkrain, Italian: Alta Carniola) is mountainous Alpine landscape along the upper part of the river Sava. This region is almost entirely alpine and partly protected as a national park. Its characteristics are high mountains, including the highest Triglav, the symbol of Slovenia. The largest urban and economic center is Kranj. Dynamic terrain and climate make it attractive for tourism. But besides beautiful natural attractions, we can find more than 20 marvelous castles in Gorenjska region. But which castles of Gorenjska are the most beautiful and fascinating?

Bled Castle is located on the exposed position on the top of a steep cliff that rises 139 m above the surface of Lake Bled. It is supposed to be the oldest castle in Slovenia. It was first mentioned in a 1011 donation deed (as castellum Veldes) issued by Emperor Henry II. 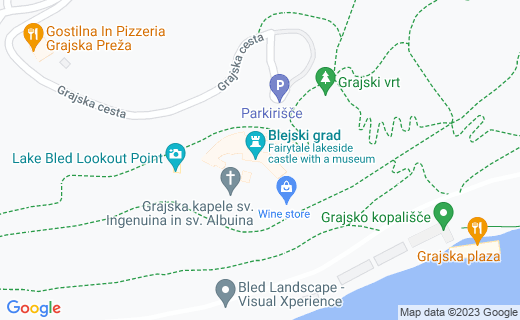 The castle can be reached by hiking trails or by a car. It comprises a knights hall, chapel, printery, castle cellar, herbal gallery, a museum and a fountain (10-12 m deep). Since the owners of the castle, the Bishops of Brixen (Bressanone) from South Tyrol visited Bled more rarely, the castle has no luxury equipment. Owners devoted more attention to the system of defense walls, towers, and trenches.

The castle is arranged as an exhibition object. Rooms in the representative tract near the chapel show the ancient history of Bled from the first excavations and the castle by the various stages of historical development with the equipment, which is typical for that time. Equipment is not from the Bled Castle, but it is important for the illustration of the culture through different periods of time.

In warm months many cultural events are held in the courtyard of the castle. Especially appreciated are the knights days when knights show visitors how it was to live in the Middle Ages.

Besides the castle itself, the most beautiful and magnificent thing is the view on Bled Island, Bled and the wider area of Gorenjska.

Today the Kamen (Rock) Castle (German: Stain) are mighty castle ruins on the ridge, which closes Draga valley near the village of Begunje (na Gorenjskem). 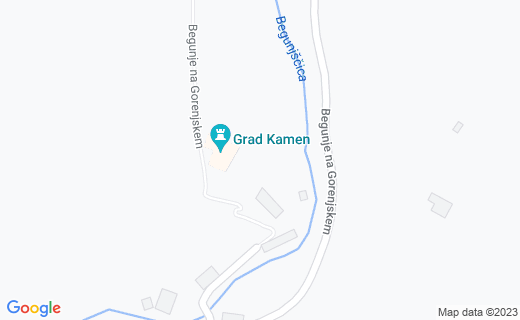 Today the ruins may not really look like a pearl, but the history of the castle was glittering. By the folk legend in the castle lived a knight Lambergar, the knight who beheaded (cut off the middle head) the terrible Pegam in Vienna (Austria) and saved the empire from destruction. Legends, of course, are not true and Pegam did not have three heads as in folk songs. But still, legends are not completely inaccurate, in them is a fraction of the truth. In the Castle Kamen really lived a knight Gašper Lambergar. He was a brave athlete of his time; he won the knightly tournaments 85 times.

The castle was (under other names) mentioned for the first time more than eight hundred years ago, but then it has been much more modest. The medieval fort with a drawbridge was surrounded by a ditch. The castle was expanded by the rich Carinthian Counts Ortenburgs who leased the castle to ministerials. These were managers who were in charge of the castle as well as administrative and military affairs in the area. Later owners of the castle became Counts of Celje and finally family Lambergar. After the severe earthquake that struck Kranjska hundred years ago, this rich noble family thoroughly renovated and expanded the castle.

In the 18th century, the Lambergar family moved into the mansion Kacenštajn (Kacenštajn Castle) in Begunje. Kamen Castle was decaying for two hundred years, then the ruins were finally fortified. And so we can safely dive between its walls into the rich history of the castle and its surrounding.

Kamen Castle is included in the European network of castles "Path of Venus". This network connects the towns and cities in Slovenia, Austria, Italy and the Czech Republic, through which in the 13th century traveled knight and poet Ulrich von Liechtenstein, who was on this journey from Venice wearing a mask of Princesses of Venus.

Loka Castle stands on a hill above the town Škofja Loka. Today it is the home of Loka Museum.

The castle was first mentioned in 1215, a more important role was taken over by the year 1511. The settlement under Loka Castle began to emerge in the 13th century, most of the inhabitants were traders and craftsmen. Loka Castle was nationalized in 1803 when it was officially the end of the Loka dominion. In 1870 the castle was bought by Fidelis Terpinc, five years later, the owner became Emilija Baumgartner. In 1890 the castle became the property of the Ursuline sisters. Ursulines have started with the renovation of the castle, the work was entrusted to architect William Treu. The castle was connected to the monastery in the city center, the middle tower was demolished and the narrower and higher bell tower was built. 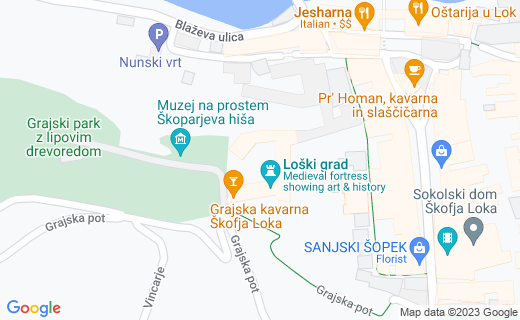 During the First World War, the castle was a Military Hospital. Between the two wars, Ursulines continued education and school work. In 1941, they were dispelled when the Germans occupied the castle. Immediately after the war, the castle was a prison for German prisoners of war and correctional institution. In 1959 the castle was taken over by the municipality. After that, it was dedicated to museum activity.

The area around the castle is a place for concerts and walking trails, which are the most beautiful in the summertime. Towards the town Škofja Lola leads the scenic route, past well-preserved city walls that protected the town for centuries.

Strmol Castle lies on the slopes of a hill named Dvorjanski hrib (= Mansion hill) near Cerklje. In the 13th century, here settled the Knights Strmole, after which the castle was named and this name was kept despite repeated alterations of the owners. Thus, it is one of the rare castles in Slovenia which maintained a Slovenian name throughout its whole existence.

Throughout the turbulent centuries the Strmol castle retained its original shape, and therefore it is one of the oldest and best-preserved castles in Slovenia. Today, the castle serves protocol needs of the Government of the Republic of Slovenia. 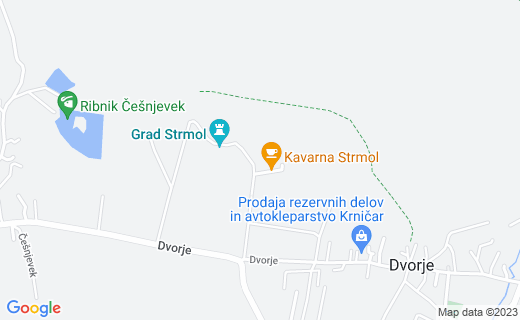 There was once a pond with a drawbridge below the castle. A pond was a shield against the Turks, but today there is a small artificial lake under the bridge. The castle is well preserved, with the park it forms a well maintained and very picturesque whole, placed at the foot of the Mansion hill.

Turn Castle stands above the village Potoče, not far from Preddvor in Gorenjska. Today, the castle building is the part of the home for the elderly.

Turn Castle was first mentioned in 1408. Many sources mention Turn Castle as a guard at the entrance to the valley of the river Kokra. 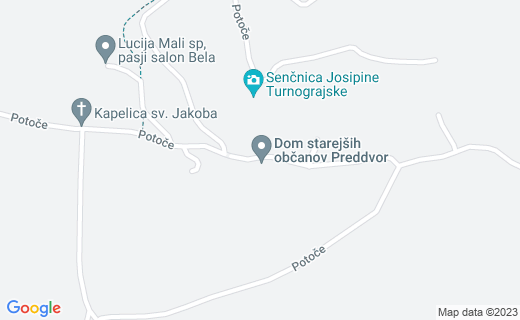 In the early 15th century Turn Castle came into the ownership of the Counts of Celje. The original castle was badly damaged in 1439, at the time of battles between the Habsburgs and the Counts of Celje. In 1473 it had been injured by the Turks during their predatory march. After the extinction of the Counts of Celje in 1456, the castle became the property of the Habsburgs. In 1500 emperor Maximilian I. sold it to a local nobleman George von Egkhu, who was then general manager of the Habsburg estates in Carniola and possessed several castles in the province, including Brdo pri Kranju. Von Egkh rebuilt and restored the castle, with the use of some Renaissance architectural additions. In 1793 the castle was bought by Martin Urbančič. Urbančič was a grandfather of a known Slovenian poet and writer Josipina Urbančič - Turnograjska, who was born in the castle in 1821. In 1909 the castle bought Oton von Detela, Slovenian member of the local nobility. After World War II, the Communist regime expropriated the family Detela and expelled them from the castle. The castle itself was nationalized and initially used as a barracks of the Yugoslav People's Army. After 1962 the castle became a retirement home.

Besides those castles there are many more. Every municipality in Gorenjska statistical region has several castles. But there is more - the nature. So while there, dive into the cultural and historical attractions and blend it with natural wonders - you will discover the perfect combination Gorenjska has to offer.