Melbourne is a beautiful city. It is a vibrant mix of art, culture, street performances, music, pubs, bars, food and a much more. Whether you are travelling to Melbourne, staying there on a temporary basis, or looking to change suburbs in Melbourne, make sure you live in one of the best suburbs of Melbourne. The last thing you want is to stay in a dud suburb and miss out on all the action. Here are 5 of the best suburbs of Melbourne.

St Kilda has to be on the top of this list because very few suburbs in the world can offer what St Kilda can. St Kilda is one of the most most energetic suburbs of Melbourne and it is also the entertainment capital of Melbourne. There is literally something for everyone in this bustling suburb. Amusement parks, hotels, performing arts theaters, music, sports, pubs, nightclubs, eateries and most importantly, the St Kilda beach! The St Kilda beach is one of the favorite spots of Melbournians when it comes to beating the heat in summer.

Benefits of living in St Kilda

Downside of living in St Kilda

If you've heard of Footscray as a violent and drug-laden suburb, let me tell you that it is a thing of the past. Ask anyone who lives in Footscray and they will vouch for the fact that Footscray has now changed and has got a massive face lift in the last few years. Footscray is the cultural hub of Melbourne and you will find immigrants from all over the world living here in Footscray. As soon as you walk out from the Footscray Railway Station, you will be hit by exotic flavors of spices from around the world, quaint little grocery shops which have goods from different countries and hundreds of restaurants which will be the wet dream of any foodie. Eateries are a superb mix of Australian, Vietnamese, Japanese, Turkish, Indian, Pakistani, African, Thai and Chinese cuisine.

Benefits of living in Footscray

Downside of living in Footscray

One of the oldest suburbs in Melbourne, Collingwood boasts of a thriving nightlife, some great shopping and fabulous places to eat out. You will love the little shops, eateries and coffee houses on Smith Street! There is no dearth of shops and supermarkets which is a big advantage! You will thank the 24 hour McDonalds at the end of Smith Street for taking care of your midnight huger bouts. Collingwood also has many boutique shops. Collingwood is also a hub for gays and has many nightclubs, pubs and bars which are gay oriented. If this meets your fancy, you may want to check out the Peel Nightclub.

Collingwood is also home to the Collingwood Magpies, the 2010 premiership winning Footy Team.

Benefits of living in Collingwood

Downside of living in Collingwood

Richmond is marred by cosy apartments, tiny streets, great restaurant, pubs, shops and sports. If you are looking for a suburb in Melbourne that is super convenient and super fun, Richmond has to be it. You can take any one of many Trams that go via Victoria Street (Tram 109 and Tram 24), Church Street (Tram 78 and Tram 79) or Bridge Road (Tram 75 and Tram 48) to the CBD and reach Flinders Street (Melbourne CBD) in minutes. The suburb is also well connected by buses and trains. The Richmond Train Station is a major hub for all trains bound to the eastern and south-eastern suburbs of Melbourne.

Benefits of living in Richmond

Downside of living in Richmond

Carlton features on this list of best suburbs of Melbourne because of its youthfulness, great restaurants, close proximity to Melbourne CBD, abundance of colleges and universities and some great architecture. You will love to dine on Lygon Street which has a unique charm with its Italian restaurants and cafe. I vote Lygon Street as the best place in Melbourne to feast on Italian cuisine. Carlton is every students dream because it is home to some of the top universities in Australia, including the prestigious University of Melbourne, and also has abundant student housing. Carlton is only minutes from the CBD and is well connected by Trams. You can even cool off in the Carlton Gardens on weekends!

Downside of living in Carlton

Moving suburbs? Check out accessories that can help 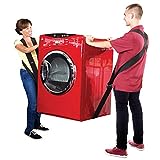