Top Five Free Museums in London You Have to Visit

There are over 150 museums in London devoted to a wide range of interests. Museums here range from the small to some of the world’s most renowned housed in huge buildings. There are museums devoted to human civilization, natural history, military history, science and technology, decorative arts and designs, fashion, and even cartoons. Best of all, most of London’s major museums are free to the public.

The following are the five most popular museums (excluding the art galleries or museums) that offer some of the best free attractions in London and are easily accessible by public transport. The five museums open throughout the week but close from 24th to 26th December.

The British Museum is a fascinating museum that tells the history civilization around the world. Opened in 1759, it’s the most popular museum in the United Kingdom and attracted 5.9 million visitors in 2017. The British Museum is a huge museum with one of the world’s largest collection of artifacts devoted to the history of civilization. Exhibits in the museum’s collections are under numerous themed galleries based on periods and locations in history. The museum is too big to see it all in a day and most visitors spend 3-4 hours seeing the exhibits.

The British Museum is a showcase of human history with its large collection of artifacts. There are galleries devoted to the history of Ancient Egypt, Ancient Greece and Rome, Middle East, Europe, Asia, Americas, and Africa. Many of the exhibits include collections from the Stone Age and Bronze Age. There’s also a gallery devoted to the history of money from prehistoric times to the present day and exhibits include seashells, coins, bank notes, and mobile phones.

The British Museum has one of the largest collections of artifacts from the civilization of Ancient Egypt after the Egyptian Museum in Cairo. The most popular exhibits from the civilization are the mummies and coffins! Exhibits from Ancient Greece and Rome include sculptures, inscriptions, columns, vessels, and jewelry. From the Middle East are exhibits from the Islamic World and the ancient civilizations of Assyria, Iran, South Arabia, and Mesopotamia. The European collection includes during the Roman rule of Britain, Medieval and Renaissance periods, and from the 19th century to the present.

Going to the British Museum

The British Museum is located on Great Russell Street and about 10 minutes walk from the London Underground Tottenham Court Road and Holborn Stations.

Categories of collections at the Natural History Museum include botany, zoology, entomology, paleontology, and mineralogy. Exhibits include fossils, skeletons, plant and zoological specimens, minerals, gems, and rocks. There are also animatronic displays of lifelike dinosaur models including the fearsome Tyrannosaurus rex and short-legged Ankylosaur. Some of the exhibits are also of historical value such as collections by the famous 19th century naturalist and geologist Charles Darwin.

Popular areas of the museum are the galleries devoted to dinosaurs that include animatronic displays and fossils such as the Tyrannosaurus rex, Baryonyx, Iguanodon, and Triceratops. Hanging from the ceiling of the Large Mammals Hall gallery is the skeleton of a large blue whale. Another highlight of the museum is the Human Evolution gallery that includes a hominin fossil dating back 3.5 million years, skull of a Neanderthal, and the skull and hand casts of a Homo naledi.

Going to the Natural History Museum

The Natural History Museum is on Cromwell Road and a short walk from the London Underground South Kensington Station and 15 minutes from Gloucester Road Station.

The Victoria and Albert (V&A) Museum is a leading fine arts museum in London devoted to the world of decorative art and design. In fact, the museum is the largest of its kind in the world and draws visitors from around the world with an appreciation for fine art. It’s major cultural institution in London and the city’s third most popular museum, attracting 3.8 million visitors in 2017. The V&A Museum is within short walking distances from the Natural History Museum and the Science Museum.

Highlights of the visit are the 15 British galleries covering art and design from the Tudor period in the 16th century to the Victorian era until 1900. The museum has one of the world’s largest collections of fine art from the Islamic world including Spain, North Africa, and the Middle East that span 14 centuries. Collections from East Asia namely China and Japan include silk, textiles, embroidery, robes, lacquer ware, porcelain, and jade. Other highlights include jewelry and textile from Egypt, Africa and Asia from the 1st century to the present.

Going to the Victoria and Albert Museum

The Victoria and Albert Museum is on Cromwell Road and nearby the London Underground South Kensington Station and slightly further is Gloucester Road Station.

The Science Museum is the largest as well as the most popular science museum in London. Opened in 1857, the museum explains how science and technology have influenced society and the impacts on our lives. It encompasses seven floors exploring human ingenuity with exhibits that kids will enjoy and fascinate adults. The Science Museum is the fourth most visited museum in London and the most visited science museum in the United Kingdom, attracting 3.3 million visitors in 2017.

The museum’s fascinating exhibits include collections devoted to the world of engineering, energy, communications, flight, space exploration, and digital technology. There are also exhibits devoted to bioscience and the environment. Besides the artifacts, there are plenty of interactive exhibits and some designed especially for young children. There’s a IMAX 3D theater (must purchase a ticket) screening interesting 45-minute documentaries about the world of science.

Popular exhibits include the oldest surviving steam engine named Old Bess built by James Watt in 1777. Another interesting exhibit is the famous steam locomotive named Stephenson’s Rocket built by Robert Stephenson in 1829. There’s a replica of the Apollo 10 command module and the historic Eagle lunar module (Apollo 11) that landed Neil Armstrong and Buzz Aldrin on the moon in 1969. Other popular exhibits are the full-sized aircrafts including the famous Supermarine Spitfire and Hurricane used in World War II.

The Victoria and Albert Museum is on Cromwell Road and nearby the London Underground South Kensington Station and slightly further is Gloucester Road Station.

Royal Museums Greenwich comprises of four nearby museums in Greenwich, a London borough on the south bank of the River Thames. Admission to the National Maritime Museum and Queen’s House are free but must purchase tickets for the Royal Observatory Greenwich and the Cutty Sark. All four museums are part of Maritime Greenwich, a UNESCO World Heritage Site and together the fifth most popular museum destination in London, attracting 2.6 million visitors in 2017.

The National Maritime Museum is the largest museum in the United Kingdom devoted to exploring Britain’s maritime heritage. The museum covers five hundred years of maritime history with its exhibits of navigational tools, scientific instruments, uniforms, maps, flags, and memorabilia. The 17th century Queen’s House was once the royal residence of Queen Anne. It’s now a renowned art museum with over 450 paintings including portraits dating from the 17th to 20th century.

King Charles II commissioned the Royal Observatory Greenwich in 1675 and its location is the meridian line that gives the world Greenwich Mean Time (GMT). The old observatory now houses a museum with exhibits of navigational instruments, astronomical tools, timepieces, and a new planetarium. The Cutty Sark is a 19th century clipper that was once the fastest sailing ship during its time. Visitors can walk beneath the hull and board the restored clipper exploring the deck, crew’s quarters, and captain’s cabin.

The Museums on the Map 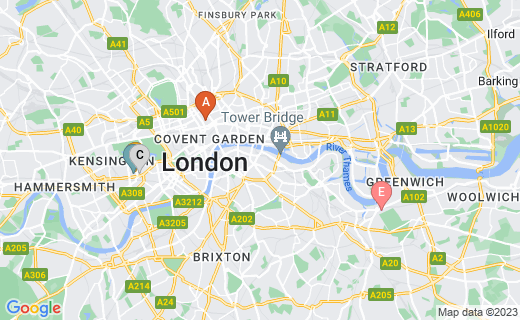