Top Places to Visit in Rajasthan

Also known as the "Land of Kings", Rajasthan is situated in Southern part of Asia - India. In India it is situated in the North Western region next to Delhi - capital of India. Rajasthan is one of the Royal States of India having a glorious past with wonderful kingly stories and houses the best of India's palaces. Travelling to Rajasthan will reveal a lot of wonderful forts, palaces and a lovely Thar desert with its wonderfully shining sand dunes and lush forests.

Rajasthan is the royal state of India having its roots in the Rajputs and the Rajputana states of yesterday. The magic of Rajasthan lies in its towering forts, royal palaces, intricate handicrafts and its vast deserts. Rajasthan has a rich cultural history and tradition, one can't miss. One can take a safari on horses, camels, elephants or even in jeeps, with the Aravalis - India's oldest mountain range as the backdrop or also choose to pamper himself in the lavish heritage properties that are all over Rajasthan.

How to Reach your destination?

All major cities of Rajasthan have their own railways stations as well as airports. They can also be reached via road by rented cars or state run deluxe buses.

The cities of Rajasthan are linked via Mumbai/Delhi/Ahmedabad and so are very well connected.

Also known as the pink city, this city is the capital of Rajasthan. It is a walled city and is located in the semi-desert lands of Rajasthan. It has awe-inspiring forts, museums and lovely markets. The Amber fort, Hawa Mahal, Rambagh palace, Nahargarh Fort, City palace, the ancient science of astrology through Jantar Mantar are just some of them. Every aspect of these constructions speak of royal tastes.

Found in the 16th century, this city is the capital of the former kingdom of Mewar. It is loacated in Southern Rajasthan bordering Gujarat. It is better known as the “City of Lakes” or “Venice of the East”. There is the Jag Niwas built on an island within Lake Pichola, Shiv Niwas and Fateh Prakash Palace converted into heritage hotels, The City Palace, Monsoon Palace, Jagdish Temple, Saheliyon-ki-bari . Wonderful as it is, Udaipur captures the hearts of tourists immediately.

This city is surrounded by a desolately empty landscape of golden-yellow sand stone and sand. There is a mud fortress which houses the palace and several ornate Jain temples dedicated to Jainism. Even the havelis or the huge houses in the township are artistically built. A major attraction of Jaisalmer is the camel Safaris.

Jaisalmer is also known for its leather messenger bags made from wild camels native to the area.

The city of Jodhpur houses one of the largest forts of India called as the Mehrangarh fort. One can see the fort from a distance as it built on a height above the city. The fort has several palaces within it with lovely and intricate carvings. The museum inside has one of the best collections of royal palanquins, arms, costumes and paintings. Jodhpur also has the Umaid Bhawan Palace now converted into a heritage hotel. One can get beautiful handicrafts of the Jodhpuri variety here.

The city of Bikaner is from the 14th century onwards and is situated in the middle of the Thar Desert. It has many attractions such as Laxmi Niwas Palace, Junagarh Palace, Lalgarh Palace and temples like Moolnayaki, Laxmi Nath andBhanasar Jain temple. The main festival is the camel festival in January every year.

Bikaner is famous for its "Bikaneri Bhujia", wool production,sweets, PATA culture ( Wooden square size table which is laid upon the streets), its palaces and for having Asia's biggest camel farm.

The city is also known for its intricately carved Jharokas. These red sandstone stone nets are found on the windows of the Junagarh fort, temples and havelis (mansions).

Bikaner is also famous for its Usta & Chadhwa Art.

Mount Abu is the only hill station in Rajasthan. In the midst of the desert, the lovely town of Mt. Abu has rivers, waterfalls and evergreen forests. The 14th century Achalgarh fort, Nakki Lake and the various Jain and Hindu temples are enough to satiate the taste of tourists. The mountian is home to various Hindu temples. The Dilwara Jain temple is a fine example of intricate carvings and architecture which is rarely seen elsewhere.

Pushkar is a town in Ajmer district of Rajasthan. It is one of the oldest cities of India and is one of the 5 dhams or main pilgrimage sites for Hindu devotees. This city is considered sacred. The camel festival of Pushkar is celebrated for 5 days till the full moon of the Kartik month (Nov-Dec). The festivities commence with a camel race with music, dance and exhibitions to follow.

Tourists can explore the rugged terrain of the Great Indian Desert of Thar on camels.

Ranthambore National Park is one of the biggest and most renowned national park in Northern India and situated at about 130 kms from Jaipur.

It is famous for its Ranthambore National Park and also houses the Ranthambore fort. The fort hosts ancient Jain and Hindu temples, some made of red karauli stone.

A visit to Ranthambore National Park is a treat for every wildlife and nature lover.

Nathdwara is a town situated 48 kms to the north-east of Udaipur.

The holy town of Nathdwara is famous for its temple dedicated to Lord Krishna. The name of the town literally translates to ‘A Pathway to Lord Shri Krishna’.

Historically, Chittor was built by the Maurya dynasty in the 7th century AD. This town is also situated near he city of Udaipur.

This city is known for its Rajputs. At the center is the the fort of Chittorgarh which sits atop a hill 180 meters high. The fort is a symbol of all that was brave, true and noble in the glorious Rajput tradition. Other attractions include The Kalika Mata Temple, the Vijay Stamba, Kriti Stamba, Rana Kumbha and Rani Padmini’s palaces.

All in all, Rajasthan is a travelers paradise and wonderful way to understand Indian Culture and Traditions. This destination is a must on the India tour trip.

Map of India with Location of Rajasthan! 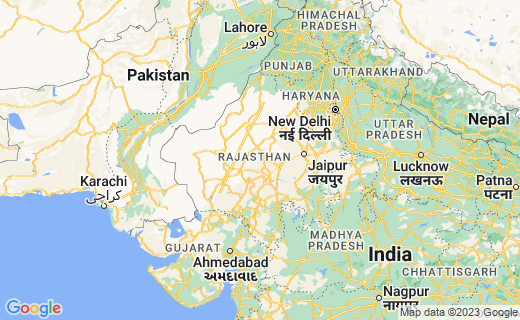 5 stars for Trip to Rjasthan

Travel is Also a Joy