London is a major international shopping destination competing with cities like Paris, New York City, Dubai, Hong Kong, and Singapore. The city is home to many major shopping destinations, each with its unique character and specialty. The shopping scene here includes an array of independent stores, retail chains, classy boutiques, shopping centers, and large department stores.

There’s no doubt that London is one of the best places in the world for retail therapy. The city offers an endless range of merchandises from trendy fashion to the latest in electronics. Central London is the main destination for most visitors to London, where many of the city’s attraction are located. The central area is also home to several notable shopping streets and districts to add on the list of attractions.

The following are snapshots of the major shopping destinations in Central London. This article does not cover markets, which is in another article titled London’s Popular Markets You Have to Visit.

There is a Value Added Tax (VAT) of 20 percent on most sales in the UK. Visitors living outside the European Union or EU (UK is still a member) can claim a VAT refund for purchases from stores displaying the “Tax-Free Shopping” sign. Stores in London usually require a minimum purchase of £35-50 to get a refund. To claim, complete the VAT407 form given by the store and attach the receipts. Then submit the form to customs before leaving the EU such as at London’s Heathrow Airport.

Oxford Street is a major road and busy shopping street passing through London’s West End. The stretch is one of if not the busiest shopping destination in the city. Oxford Street is London’s mecca for shopping with over 300 stores and half a half million visitors passing through each day. Merchandizes here are synonymous with major British and international brands including fashion, accessories, shoes, bags, jewelry, watches, cosmetics, and perfumes. A great time to be on Oxford Street is during the Christmas shopping season, when colored lights twinkle the night.

Topshop is an upmarket retailer offering fashion, accessories, leather goods, and cosmetics. John Lewis is another upmarket retailer devoted to fashion by British labels. Dorothy Perkins is a women’s fashion retailer that includes dresses, nightwear, coats, jackets, and knitwear. Niketown comprises of four floors devoted to all sorts of sportswear and gear under the famous Nike brand. Primark is a major clothing and accessories retailer offering fashion at more affordable prices.

Regent Street gets its name after the Prince Regent, who would later become King George IV reigning from 1820 to 1830. It’s another major shopping destination in London’s West End, popular with shoppers searching for clothes, accessories, handbags, shoes, jewelry, fragrance, and even toys. However, Regent Street is more upmarket compared to nearby Oxford Street with its fashion houses offering designer brands. Like Oxford Street, Regent Street is a beautiful sight during the Christmas season when colored lights decorate the night.

The Hamleys flagship store on Regent Street is the oldest and largest toy store in the world. The seven-floor toy store is a paradise for kids offering from soft toys to science kits. The Apple Store here is the second largest in Europe while the largest is at Covent Garden. Liberty is a department store specializing in luxury items including men’s and women’s fashion, accessories, home products, fine jewelry, and beauty products. Burberry is a British fashion house and other designer stores include Calvin Klein, Armani, Karl Lagerfeld, Hollister, and Jaegar.

Bond Street has a long history associated with the rich and upper class. Today it is a prestigious shopping street where the rich, famous, and international jet sets flock. Shopping on Bond Street is all about luxury. It’s synonymous with designer stores, exclusive brands, and prices that go along with it. Beyond shopping, the street is also home to some of London’s most exclusive hotels and restaurants. Bond Street actually comprises of Old Bond Street and the adjoining New Bond Street but Londoners often refer both as Bond Street.

Knightsbridge is in charming corner of London where many of the city’s affluent make their home. It’s also a fashionable shopping district with its celebrated department stores and fashion houses mainly located on Brompton Road and Sloane Street. British fashion retailer Topshop and Burberry as well as fashion houses Gucci and French are on Brompton Road. However, most of the luxury stores are on Sloane Street including Armani, Roberto Cavalli, Prada, Jimmy Choo, Christian Dior, Fendi, Versace, Cartier, and Tiffany.

Carnaby Street is a pedestrian only shopping street occupying three blocks in London’s Soho neighborhood. The streets nearby Carnaby Street including Kingly Street and Newburgh Street are a continuation of the shopping scene. During the swinging era of the 1960s, it was a popular destination for the mod and hippy fashion sought after by young shoppers. The fashion styles of the swinging era are no longer around but Carnaby Street remains popular with young shoppers searching trendy clothes at more affordable prices.

Carnaby Street and the nearby streets are home to mainly independently own stores and fashion boutiques. The fashion styles are from emerging and established British labels, which are often on par with the international labels but at much reduced prices. British labels here include Baracuta, Paul Smith Soho, Barbour Heritage, and Ben Sherman. However, retail chains and international brands have slowly gained an entry. During the Christmas season, colored lights decorate Carnaby Street and many stores offer discounts.

The Shopping Destinations on the Map 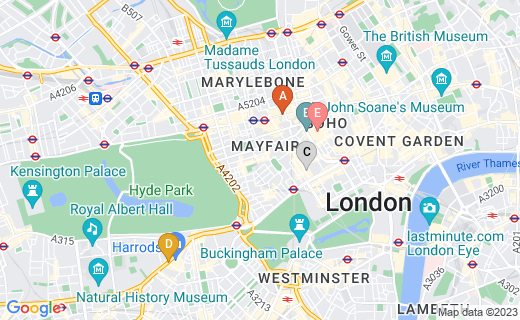