Manipur, one of the 28 states of India is located in North-East India. It was described by Jawahal Lal Nehru as “a land of jewel”. Manipur literally meaning “A jewelled land”

This little corner is a paradise on Earth where Mother Nature has been extra generous in her bounty. Manipur has a pleasant climate throughout the year and is dotted with scenic landscapes. An oval shaped valley surrounded by blue green hills, rich in art and tradition filled with its cascading rapids, tripling rivers, varieties of flowers, exotic blooms and lakes.

Manipur is a potential gateway of India to the East and South East Asian. Least touched and least discovered Manipur promises to be the great tourist discovery of the 21st century. 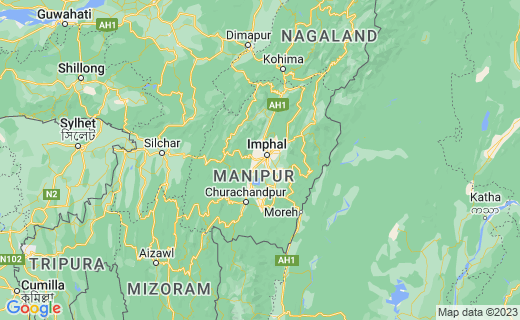 The Capital of Manipur, Imphal is a busting minimetropolis, which is divided into two districts Imphal East and Imphal West.The city is mainly inhabited by the Meetei; besides there is also Pangals (Manipuri Muslims) and other tribes.

The city contains the Tulihal Airport. This Imphal airport is the second largest airport in the region.

Imphal can be visited all around the year, barring the rainy months. The month of October is a pleasant one with clear skies and the winter season starts in November.

Authorickshaws & rickshaws pullers are one of the best options for shopping & seeing the places in and around the Imphal city.

This Central Orchidarium is situated at a distance of 10 kms from Imphal on National Highway No. 39. It covers 200 acres and houses over 110 rare varieties of orchids, which include dozens of endemic species. The peak blooming season is March-April.

The most interesting factor of Khonghampat is that there are some rare species of flowers which resembles lizards, moths and bees. Orchids like Cymbidium and Cattleya orchids are the much adored ones along with some endangered species of orchids. Most of these species are rarely found in other parts of the world.

People from all parts of the world come there to see these natures’ wonders.

Beautiful Blooms from the Orchidarium

Loktak Lake is the largest fresh water lake in Northeast India with an area of about 287 sq. Km (35 km x15 Km).Loktak has been already declared a Ramsar site.

From the Tourist Bunglow situated at the top of Sendra Island, visitors get a bird's eye view of life on the Lake small islands that are actually floating weeds on which the Lake-dwellers live in the backdrop of the shimmering blue water of the Lake.

The Sendra Tourist Home with an attached Cafeteria is an ideal tourist spot.

Many local people earn their livelihood by fishing in this lake. Fishermen with their families live in floating boat houses. Apart from its fish, Loktak Lake is known for its hydro power project for generating electricity.

Boating and other water sports are organised here in Takmu Water Sports Complex.

Which will be the best way to save Sangai?

The major attraction of the Keibul Lamjao national park is the Sangai, also called Manipuri dancing deer. In other words, it is a home to brow altered deer, popularly known as “Sangai",the dancing deer of Manipur. Its scientific name is cervus eldii eldii. Sangai is found only in Keibul Lamjao National Park, the last natural habitat of the deer.

According to a census report which was conducted in April 2014, the total number of Sangai stood at 204.

Other animals found in the Park are leopard cat, hog deer, fishing cat and wild goat. Prominent bird species recorded in the park are both migratory and resident and some of them are the East Himalayan pied kingfisher, northern hill myna, lesser sky-lark and black kite.

The Park is in Bishnupur district of Manipur, near Loktak Lake. It has an area of about 40 sq. Km and is mainly made up of swamps and wetlands.

Situated at 53 kms from the capital city – Imphal, it can be reached by bus or taxis.

The Dzuko Valley, an enchanting place, is in Senapati district of Manipur, India. The valley can be reached by trekking from the border town of Mao, which is 107 km from Imphal, the capital of Manipur, but only 28 km from Kohima, the capital of the neighbouring state Nagaland.

One can observe snowfall in winter and budding flowers of Dzuko Lily in spring season (May to July).

Siroy Lily is named after Miss Macklin, the name of the wife of a British Botanist, Frank Kingdon Ward, who discovered it in 1946. Its botanical name is Lilium Maclinae Sealy. It is the state flower of Manipur.

Shiroy lily grows only in Siroy Hill of Ukhrul district of Manipur, India. The peak season for it bloom is from second week of May to 1st week of June.

Shiroy Hill, the home of the lily is about 39 Kms from Ukhrul and Ukhrul is 83 kms from Imphal, the capital of Manipur.