Top places to visit in Bhutan

Bhutan is a lovely place to be in. It is in the midst of lush green mountians, filled with valleys, sparsely populated by the traditional Bhutanese population and is open. The scenic beauty is just beautiful and worth the money spent. Bhutan thrives on what the King states as Gross National Happiness.

Bhutan is a small country neighboring Eastern India and the best and most economical passage to this beautiful country is from India. It is a landlocked state in South Asia located at the eastern end of the Himalayas and is bordered to the north by China and to the south, east and west by the Republic of India.

From India you can either travel to Bhutan on road (that's the economical way) or by air on Drukair (Bhutan's official airline).

If you are travelling by road, you have to get to Phuentsholing which is the entry point to Bhutan. Phuentsholing is around 1 hour from the nearest Indian railway station- Hashimara or approx. a 4 hour drive from Siliguri (a small city known as the gateway to north eastern India).

What do you require:

Some of the places to visit include, Phuentsholing, Thimpu, Paro, Punakha and Bhumtang.

This is the border town of Bhutan with India and officially its entry point for entering into Bhutan. This small town is a business center and a trading point between India and Bhutan. Altough nothing new here, it definitely gives you a feel of what Bhutan can be inside.

Thimpu is the where the Kings Palace is situated. A single road and the river Thimphu Chuu defines Thimpu city.

The lovely capital city houses the King's Palace, a large market place and its the commercial hub of Bhutan.

Paro is a city built in the 10th century. Beauty in paradise is how Paro can be described. Rinpung Dzong was first built with stones, but was destroyed in fire later on. Rinpung means "heap of jewels". A new Dzong was built in the heart of the city. Housed within its walls is a collection of sacred masks and costumes. The Dzong is a center of Buddhist sacred documents. On the hill above the Dzong stands an ancient watchtower called Ta Dzong. Below the Dzong stands the Ugyenpelri Palace, a royal residence constructed by penlop Tshering Penjor.

For entering any of the Dzong's one must procure prior permit from Thimpu and wear formal pants. Photos are a strict NO...NO, when inside the Dzong.

Other attractions of Paro include the wonderful landscape, hills, a complex of traditional architecture with richly decorated buildings housing small shops, institutions and restaurant, 15th century temple - the Dungtse Lhakhang situated by the new bridge and the Ugyen Perli Palace.

10 km outside Paro is the famous Taktshang Hermitage famously called "Tiger’s Nest" on the face of 1000 m cliff. The Tiger's Nest is highly sacred to the Bhutanese as they believe Guru Rinpoche, the father of Bhutanese Buddhism landed here on the back of a tigress. You must walk uphill for around 6-8 hours to reach the Tiger's Nest.

There are some wonderful resorts and Hotels, both cheap and costly, which tourists can avail of. Tourists they can travel by cars or taxis in the town.

Bhutan thrives on eco-tourism, hydel power and handicraft exports. The single highest benefactor is India due to its close proximity to this country. It is rich in culture and minerals. A quiet economy, it is inspiring to note that it has the power to thrive on its own sources.

It is a safe country and so safe that they say even the palace does not have guards for protection. 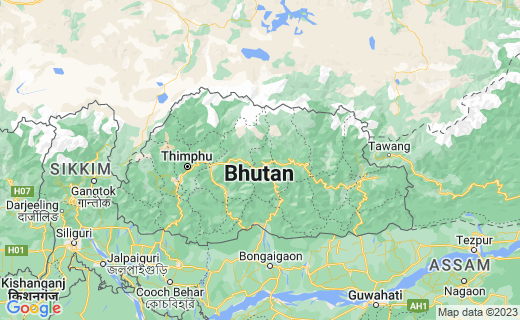