A Tour of St Patrick's Ireland

Ireland has many sites closely associated with St Patrick, in history and legend. However most of them are off the well-worn tourist trail (you know - Dublin, the Ring of Kerry, the Giant's Causeway ...). As an Irish woman I grew up listening to tales of St Patrick, so here is the insider's guide to some of the sites the Irish visit on St Patrick's Day. It should be useful if you are would like to visitIreland someday and are interested in discovering the island's most ancient sacred sites.

Brought here as a slave in the forth century AD, Slemish is thought to be St Patrick;s first home in Ireland. According to historical sources, Patrick was a young Christian man living in Roman Britain when he was captured by Irish raiders and sold as a slave to Milchu who set Patrick to work watching his sheep on Slemish mountain. In defence against the loneliness, Patrick turned to prayer. Slemish mountain can therefore claim to be the site where Patrick's spiritual journey to sainthood began. Today, local people still climb the mountain on St Patrick's Day (17th March) in honour of their patron saint.

When St Patrick returned to Ireland with the intention of converting the pagan Irish to Christianity, he is said to have first visited this mountiain in beautiful County Mayo in the west of Ireland. According to legend he fasted for forty days and nights on this mountain before setting out on his mission. This is also the site from where he reputedly banished the snakes from Ireland by throwing a bell down the mountainside - though this may be more fact that fiction! This is mountain is a popular place of pilgrimage for the Irish, with some still climbing the mountain in the traditional style - barefoot!

Many churches the length and breadth of Ireland are reputed to have been founded by the saint, and bear his name to this day. They are two many to mention all of them individually but here are a couple of the most well know... St Patrick's Cathedral Dublin is built on what is believed to be the site where the saint baptised the locals on his visit to the area. St Patrick's Cathedral in Armagh ( the Church of Ireland one) is reputed to have been founded on that very site by Saint Patrick and has continued in existence on the hill from the fifth century to the present day - although it has been rebuilt 17 times. Armagh was the centre from which Patrick extended the influence of his growing church, and the ancient city remains the ecclesiastical captial of Ireland to this day.

This small lake in County Donegal has been a site of pilgrimage for the Irish in unbroken tradition from the seventh century to the twenty-first. The site appears on various Medieval maps of Ireland, often the only site in Ireland which the cartographers deemed worthy of mention. Legend tells that in the fifth century Christ showed St Patrick a cave on Station Island in the middle of the lake which was the entrance to hell. This brought the site much fame in the Medieval period when thoughts of hell and purgatory where uppermost in the minds of Christians. Today Roman Catholics continue to make pilgrimage to the site, from all over Ireland and beyond. But be warned - the full pilgrimage experience involves three days spent walking around the holy sites of the island barefoot reciting prayers, living off only black tea and dry toast (and not very much of either) and spending your first night on the island awake at services in the church. It's not for the feint-hearted but I have a friend who did it once and she said she felt wonderful afterwards, like she had really achieved something.

Rising above the green plains, this rock has been a sight of religious significance in Ireland since pre-Christian times. So it was a perfect site for St Patrick to begin converting the Irish chieftains in the south of the Emerald Isle. The story is told that St Patrick visited the site in 450, converting Aengus King of Munster to Christianity. Legend has it that when St Patrick was carrying out the ceremony he accidentally pierced the foot of the king with his crozier, who said nothing. When the saint noticed the wound he asked the king why he had not spoken up when his foot had been pierced. Aengus replied that he had thought the foot-piercing was part of the ceremony!

Downpatrick claims to be the final resting place of Ireland's most famous saint. Patrick is reputed to have been buried here in a shroud of Irish linen in 461. The grave is within the grounds of Down cathedral and is marked by a large stone monument. There is a purpose-built St Patrick's visitor centre in the town which tells the story of the saint's life in Ireland, so although Downpatrick is said to represent the end of the saints journey around Ireland it makes it the perfect place for you to start a tour of St Patrick's Ireland. 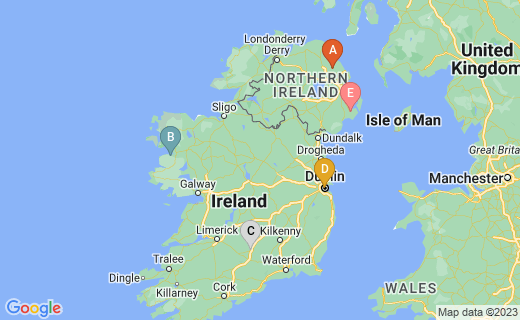