Note on Neelum Valley and Kashmir.

Bear in mind that I have written this article with the assumption that most readers will have some basic knowledge about Kashmir. However since many people do not so let me clarify some things

Neelum Valley is situated mostly in Azad Kashmir. The region is volatile due to the presence of LOC or line of control, a ceasefire border between Indian Kashmir and Pakistani Kashmir. In India the Neelum River is referred to as Kishenganga river.

Neelum valley is the name given to the areas surrounding the Neelum River. The word Neelum means "Blue" and the name certainly holds true for the bluish green Neelum river. The valley is known to relatively few people, even in Pakistan, and due to its isolation and most of all lack of proper infrastructure it is free of mass tourism, pollution and globalization (although many houses now do sport satellite T.Vs) and hence sometimes referred to as " Virgin" beauty.

The 200 km long valley boasts of lush green mountains, beautiful glacial streams, a roaring blue river and fruit trees. All this beauty is enhanced further by the local wooden huts built in traditional manner, terraced fields, fresh and crisp mountain air, friendly hospitable people and above all an absolute lack of urban lifestyle.

My tour of the scenic and beautiful valley was arranged by a local friend and in the entire trip we only stayed in one hotel and the rest of days were spent in houses of my friend's many relatives who were spread throughout the valley.

Journeys into the valley start from Muzaffarabad, capital of Azad Kashmir. Access to Muzaffarabad city is only possible through roads and the drive takes around 3-4 hours from Islamabad city, capital city of Pakistan.

There is a local bus service which runs from Muzaffarabad up to Kel. After Kel the lack of proper roads means that the journey further on can only be performed by 4WD vehicles. 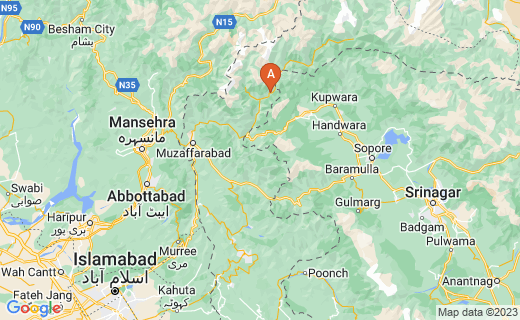 Untold Story of the People of Azad Kashmir
Buy Now

The major towns all have local hotels and rest houses. Trekking, Hiking and camping are extremely popular activities among the few visitors. Kundal Shahi sports a very nice rest house whose booking is performed through Muzaffarabad other hotels in the region are satisfactory at best. Tour guides are available for trips into the valley from Muzaffarabad city which has all the major facilities of any large urban metropolis.

Banks, Bazaars and hospital facilities are available in Authmaqam town. Infrastructure and tourist facilities such as chairlifts,view points and quality hotels are unfortunately absent in the region though in my opinion this absence in itself ads a charm to the valley.

There are several breath taking mountain peaks and glacial lakes surrounding the Neelum valley. Most of these are accessible only during the short summer and that access too is only via treks or hikes although mules and horses can be arranged using the locals. These lakes especially Shonter lake and Chita Katha lake are bewitching and popular camping sites among the few yet regular visitors to the region.

Unfortunately I don't have any photos of the lakes since i myself haven't visited them as of yet, although i plan to visit them in the future. You may Google the images of the lakes if you like i can guarantee that its worth it.

Access up to Kel is usually open for foreigners but after that, due to the sensitivity of the region, they are not allowed to proceed although the region after Kel and especially Taobat ( the final town) are stunning and without a doubt the crowing beauties of the Neelum Valley.

Note that Neelum Valley and Azad Kashmir are considered disputed territories and the infamous LOC or line of control between Pakistan and India passes through several parts of the valley. As such access in the valley is also unfortunately subject to the conditions on Line of Control border, and more specifically between India and Pakistan, which have been known to fluctuate in past.

All photos and images were taken using digital cameras and unfortunately I cannot boast of my photography skill...