Sun Setting Over the Salton Sea Behind the Banana Museum

An Odd Museum in the Middle of the Desert

If the idea of driving some 50 miles across the southern California desert to visit a museum dedicated to bananas housed in a tiny building not much bigger than the living room of the average home doesn’t excite you this is exactly how I first felt about visiting the International Banana Museum located on the north east edge of the Salton Sea in Mecca, California.

On a recent vacation in Palm Springs, California with our daughter and her husband in Palm Springs, California we spent our time visiting sites in the area. One of these sites was the Salton Sea which both our son-in-law and I wanted to see but neither my wife nor our daughter had any interest in seeing it. However, Doug and I prevailed so the 4 of us headed for the Salton Sea with Doug insisting on including the odd ball sounding International Banana Museum on our tour.

What is the Salton Sea?

Located in Colorado Desert in southern California, the Salton Sea is situated in an area that is mostly flat and barren with an occasional tree or abandoned structure punctuating the landscape. Despite the emptiness there is something beautiful about standing in the middle of miles of flat, empty land.

Along the Beach of the Salton Sea in the California Desert

The water continued to flow into the area from the Colorado River until 1907 when repairs to the system were completed. The flood waters accumulated in a low lying area known as the Salton Basin which is the site of a similar prehistoric lake.

Unlike the prehistoric lake, which had an outlet that allowed its waters to flow into the Gulf of California the current Salton Sea lacks such an outlet due to the shifting position of the Colorado River and the prehistoric build up of land to the south which left the Salton Basin without any way to drain. Currently the Salton Sea is replenished by rain water and loses water through evaporation only. This has resulted in the salinity or salt content of the Salton Sea to increase steadily since its creation in 1905.

Banana Museum Is Easy to Miss From the Highway

We put the address of the International Banana Museum, 98775 State Hwy 111, Mecca, CA 92254, in our GPS. California State Highway 111 is nice, paved highway running more or less parallel to the eastern shore of the Salton Sea although in many places it is some distance from the shoreline.

Despite this we drove right past the museum not noticing the small building situated about 500 feet off the road nor the not too conspicuous sign and somewhat abstract banana sculpture both located 30 feet or so from the road.

Realizing our mistake we turned around finally found it.

The museum occupies the northern third of a small, one story, building in which the remaining two-thirds is occupied by Skip’s, a small market selling groceries, liquor, camping and fishing supplies. 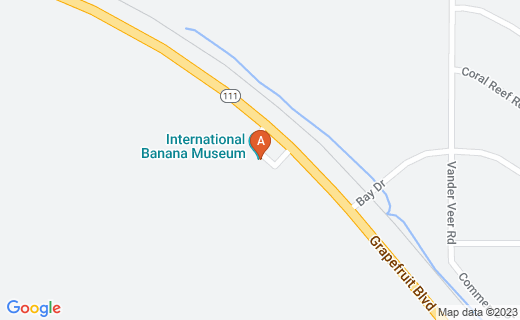 My Wife in Modeling in a Banana Costume

The door to the museum was locked and when my wife and daughter went into the store to inquire the clerk answered their query with a dismissive comment about the museum being open only whenever the owner felt like showing up.

We left planning to stop and try again on the way back to Palm Springs. As we drove away I was convinced that the museum was nothing more than a hobby project of an aging 1960s era hippie living off a trust fund from his parents.

Old Photograph of A Man Carrying Bananas To Market

Museum Was Open When we Returned

After leisurely touring the eastern shore of the sea we reached the south end, where we turned around and headed back toward Palm Springs. Passing the International Banana Museum we not only found it open but with some visitors inside.

Admission is $1 per person. However, if a visitor purchases something the dollar is applied toward the purchase so long as the price of the purchase is $1 or more. Since it was open we went in and paid the $4 entrance fee for the 4 of us.

Despite my initial misgivings, all four of us were pleasantly surprised by what we found inside. While there is no comparison with museum giants, like Chicago’s Field Museum of Natural History, the International Banana Museum is an interesting piece of Americana.

Metal Sculpture of a Banana in Front of the Museum

The inside was crammed from floor to ceiling with a variety of banana paraphernalia ranging from historic photos, postcards and articles as well as every type of banana knickknack imaginable.

While mostly the personal collection of the owner many of the items have been donated by fans. The huge quantity and variety of items boggles the mind, especially the minds of those of us who have always assumed bananas were just a good tasting fruit.

Despite the small, cramped size of the museum, the vast quantity of items takes a while to view even with only cursory viewing.

Despite the availability of banana souvenirs and some snacks the best use of your dollar admission is to add another fifty-nine cents to buy a serving of one of their homemade ice cream (available in cone or dish).

While they tout their banana ice cream I settled for a chocolate ice cream cone. Much as I like bananas I have never cared for banana flavored items.

The ice cream is homemade on site by the owner and he uses real bananas, not banana flavoring, for his banana ice cream.

Some More of the Many Banana Knickknacks Displayed in the Museum

International Banana Museum is Well Worth the Trip

Overall, for all four of us our visit to the International Banana Museum was a very enjoyable experience.

Coconut Carving of a Monkey Eating a Banana